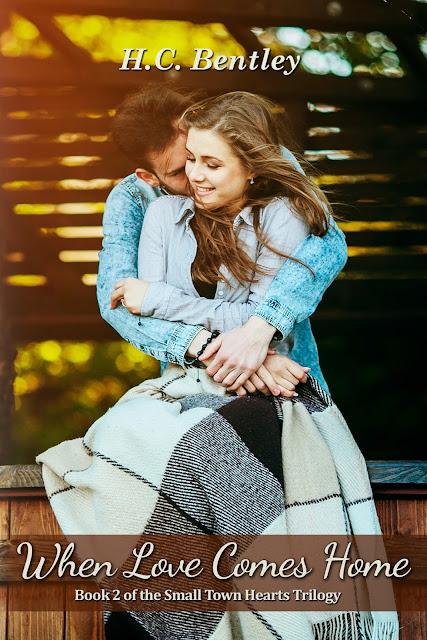 The summer before she left for college, Kari Nelson had the world in the palm of her hand. She was on her way out of her small hometown and out from under the thumbs of her controlling parents. But more importantly, she was in love for the first time.

That summer would change her life forever.

Years after returning home unexpectedly, Kari is no longer a naive and hopeful teenager. She’s a grown woman who has been married and divorced, and is now a single mother who balances running a respectable business while also raising her daughter. The daughter Marc Eaddens, the boy she'd loved all those summers ago, didn't know he had.

That boy is now a man who's returned to town to take over the family business from his ailing father. Sparks fly and tensions rise when he discovers the truth about the girl in Kari's life. Will he forgive Kari for keeping her secret – and his daughter – to herself? And can the two of them come together for their child...and themselves?


There will be a virtual launch party on H.C. Bentley’s Facebook page on November 6 & 7. Various authors will take over with games and prizes. Everyone is invited to attend! 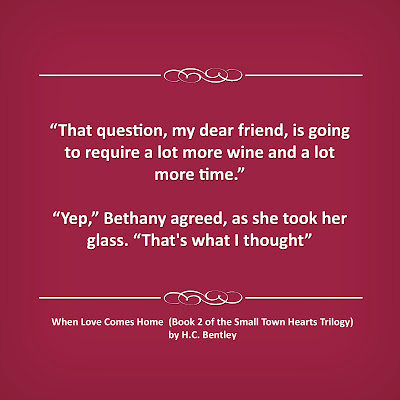 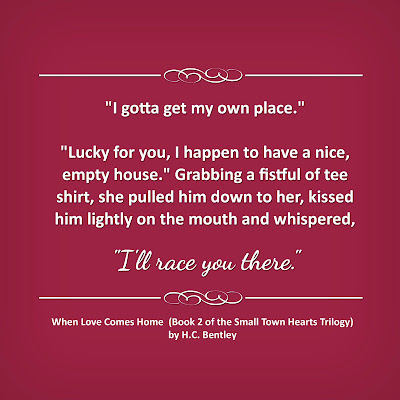 The summer day was like a scene from a movie. Under the arch of a perfect blue sky, lush meadow-like hills, sprinkled with wild flowers, dipped and sloped. Stands trees of various types and heights, thick with leaves, speared towards a sky dotted with fluffy white clouds. Tall blades of green grass swayed in the breeze at the water’s edge. The only sounds came from birds calling their mates, the gentle lapping of the water on the bank, and the occasional rustling of the leaves in the trees.

The young couple, wrapped up in each other on a faded blanket under a draping willow tree, didn’t notice any of it. They were too busy soaking up every moment they could together, because summer was coming to an end, and the real world was waiting.

“I don’t want to go.” Kari Nelson's voice held a whining edge as she rested her head against her boyfriend’s chest.

“You know you have to.” Marc Eaddens twirled Kari’s blonde ponytail, still damp from their swim, between his fingers. “Your father is set on you going, and we both know he won’t have it any other way.”

“I know.” Her frustrated sigh blew warm across his bare chest. “I’ll go, just to get away from the tension at home. But I don’t want to be away from you.” Her fingers did a mindless dance over his skin as she tilted her head back to look at him. “I’m going to miss you.”

“And you know I’m going to miss you, too. But we’ve talked about this.”

“Yeah. I just wish our schools weren't so far away from each other. At least if they were closer, there'd be a chance to visit on weekends."

"I know. It would be nice if they were closer. But your parents insist on you going to Lindsey Wilson. Which is hell and gone from Roger Williams."

"I can't believe you'll be all the way up in Rhode Island." Her mouth came together in a small pout. "Long distance relationships suck."

“They do,” he agreed. “We can make it work. We only have to make it to the holiday break, which is what…four months or so? Then we’ll get to see each other and spend some real time together. In the meantime, we’ll write, and call when we can. The time will fly by.”

“Promise.” He kissed her forehead. “When do you leave?”

“In a couple of days. Mom and Dad want to take a little side trip along the way – won’t that be fun - then they’re dropping me off early so I can get settled in before classes start.” She curled back into the curve of his shoulder and closed her eyes. “What about you? Still heading out tomorrow?”

“Yeah.” Kari felt his sigh in her hair and his arm tighten around her shoulders.

They laid together, neither speaking for several moments.

“Kari?” Her name came out in a single low, soft word.

“Then we’ll be together, no matter what. We have to believe that.”

“I do. Hold me a little tighter, though. Okay? So that when we’re off in two different places, I can remember what it feels like.”

“I can do that.” He wrapped both muscular arms around her, bringing her closer. “I can hold you closer. And I can kiss you.” Rolling so his strong body angled over her petite frame, he pressed his lips to hers. “And I can make you forget, for a while, of the months to come.”

Thin shafts of light snuck through the fluttering curtain of the willow, leaving dappled patches on her sun-kissed skin. Marc lifted his head to look down at her just as a sudden breeze parted the drooping branches of the willow for a brief moment, allowing the sun to burst in, bright and full. The golden rays cast themselves upon Kari's body and, for a moment, Marc held the light in his arms. Her hair, warm as honey and drying in the slight shift of wind, gleamed. Skin, golden from a summer's worth of days, glowed. Brown eyes, an odd combination of chocolate and bronze, sparkled. Just as quick as the breeze had come up, it died down again to leave them hidden away from the world.

"Marc." A cool, slim hand met his cheek. "Why are you looking at me that way?"

"I'm not sure. I just know you've never looked at me that way before."

"Because it just hit me," he began as he stroked a stray lock of hair from her forehead with a single fingertip, "How beautiful you are. It took my breath away."

Even as her smile lit her face, tears began to well. Finding no words to express the enormous emotions swirling within her, she instead pulled him closer so she could press her lips to his.

The kiss was gentle, even a bit sad as the two realized this would be their goodbye. Kari's fingers alternated between light strokes and pregnant pauses along the bare muscles of Marc's back. His fingers mirrored her actions as they danced along her hair.

Those fingers did the same dance as they skimmed down Kari's jaw to her neck, where they found the strings to the bikini top she wore. As the kisses grew deeper, he toyed with the ends of the strings, twirling them between broad fingers. Kari's hands moved up to frame his face, to hold him there as their lips did a dance of their own. When the urgency of their kiss ramped up, Marc gave a pull on the strings he still held. Rather than an impatient tug, he drew them out in slow, measured movements.

The gentle, almost reverent way Marc moved was not lost on Kari. She knew he was trying to make this time, their last for a long while, memorable and special. She also knew she just plain wanted him, memorable and special be damned. In near desperate moves, on ragged shallow breaths, she made sure he knew as well.

They came together in a fever of roaming hands and hot kisses. It was a bittersweet joining, as each knew it would be the last time they would be together in such a way for a while.

What neither of them knew, as they laid together in the aftermath, was just how long it would be before they saw each other again, and what they would discover when they did. 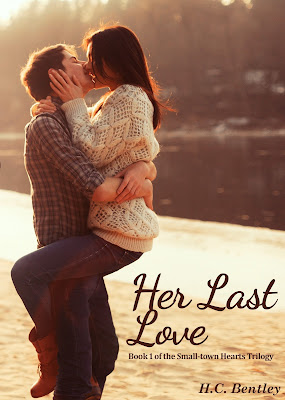 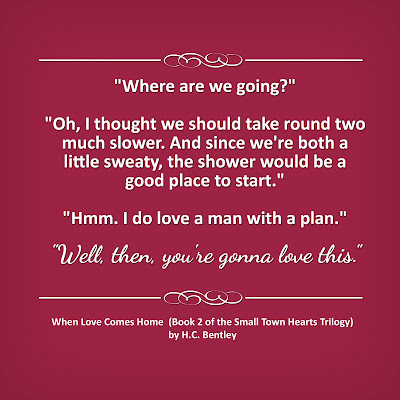 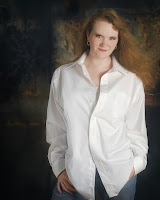 H.C. Bentley is a veteran of the U.S. Army, as well as a part-time professional photographer. Her life is filled with books -- she is not only a writer and an avid reader, but she is also surrounded by books in her job at her local library. She is currently working on her second novel, and resides in Kentucky with her husband and two daughters. 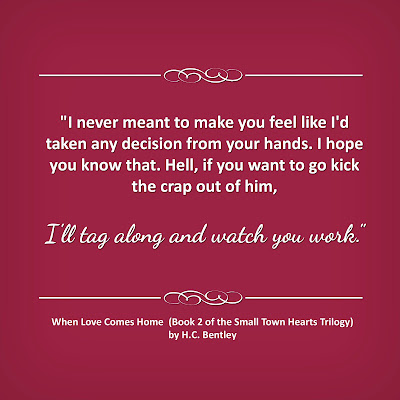 Email ThisBlogThis!Share to TwitterShare to FacebookShare to Pinterest
Labels: GIVE ME BOOKS, H.C. Bentley, Release Blitz, When Love Comes Home