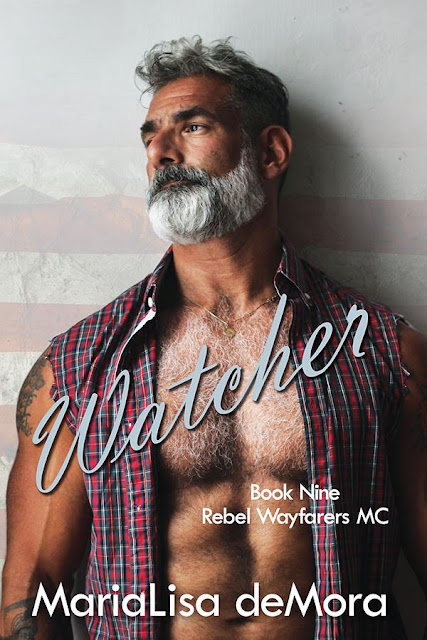 Synopsis
Watcher is known in the MC community as a man with strong beliefs. His sense of honor has been built in him from childhood, forged in the mountains of Kentucky, rooted there by family and circumstance. In the ever-changing world of outlaws, he’s made a place for himself, winning a seat at the table for negotiations and decisions that impact not only his club, but those around him. Powerful men ask for his counsel, revealing a trust and respect that can only be earned. His family loves and supports him, too, and he protects his wife and children with a fierceness that consumes. Enemies loom on the horizon, because for every man he calls brother, there are those who would take everything from him.

Full description:
Michael Otey learned early in life that people outside the ranks of family and close friends were not to be trusted. They were the kind of folks who would use you right up, betraying and throwing you away once your usefulness was exhausted. At sixteen, life nearly derailed in a moment of rage, he was presented with two impossible choices. He selected a track, prayed it was the right one, and set foot on the path of honor, because even at such a young age, he knew honor mattered.

Almost immediately things started looking up in his life. The Army molded him into a soldier, giving him no choice but to excel. Through years of service, the men in his unit forced him to become a leader, moving him to that role by demonstrating with every action that they believed he was trustworthy. Brothers in arms.

That was when death and destruction once again rocked his world, forcing another impossible choice. Pierced through with a thirst for vengeance, raging and alone, he gravitated towards the kind of men who shared his feelings. Hard men, but ones filled with an unshakable sense of honor. Members of a motorcycle club who were not afraid to wreak devastation in support of the found family they shared. The Outriders MC. Brothers in spirit.

To escape the ghosts haunting them both, his older brother had launched his own club, filled with veterans and soldiers. His brother’s stories about his members set up a longing deep inside him, and Mike found himself reaching towards the forgiveness and peace his brother had found. But, in an atmosphere drowning in blood and hate, peace was hard to find. Determined to start fresh, it wasn’t long before Mike, now known as Watcher, followed his brother west, finding a true home as a Southern Soldiers. Brothers in truth.

Then, on what should have been a routine run into Old Mexico, Watcher was confronted by both loss and hope. He saved a doe-eyed beauty from a life branded by pain, but in turn lost the last close link to his family. In her it seemed he found a reason for carrying on, even perhaps a chance at love. As he rebuilt his life, he vowed to keep her safe and the club strong, promising to protect everything that mattered. Brothers. Family. Honor. To do that, Watcher would need to open long-tattered connections to Kentucky, reaching far into his pain-filled past and calling on Davis Mason and the Rebel Wayfarers MC.

“Whoever fights monsters should see to it that in the process he does not become a monster.”
– Nietzsche 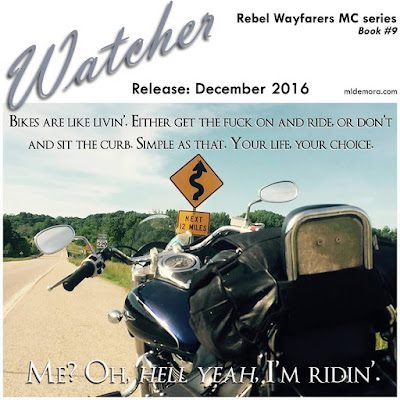 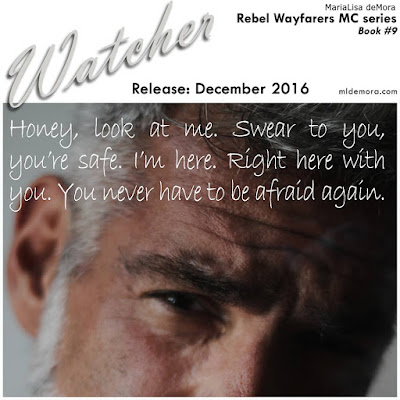 Fifteen-year-old Michael Otey stood at the top of the path, shoulders back, long arms relaxed at his sides. His ma promised he’d grow into his reach soon, said Mikey just had to be patient. From where he waited, right where the path doglegged sharply, he could see the pitch in the grade as the dirt track plunged down the steep mountainside towards the holler. He was watching his pa and one of their neighbors walk the trail that led towards the mine entrance. Not quite dawn, the early light streaming through the fog-filled air created odd shadows, making the men appear as dark silhouettes—featureless and eerie when glimpsed through the trees. His pa turned just before the path crooked at the bottom of the hill and waved, one long arm extending far over his head and holding there until Mikey waved back.

Next year Mikey would be pacing the same trail alongside them, taking his turn in the elevator to be deposited into the bowels of the earth. Not yet, though. His pa was adamant Mikey not take the burden on until he was at least sixteen.

Turning and jogging five long strides off the path and into the woods, Mikey oriented himself, then set off at a steady trot back home, staying off the path for this leg of the trip. Eyes down, he scanned the ground ahead and to either side, occasionally stopping to collect black morel mushrooms growing from the hillside. Practiced motions allowed him to leave the roots intact, the soft stems of the black and gray fungus falling to the pinching pressure of thumb meeting fingertip. Elbow tucked inside the bag slung over his shoulder, Mikey cradled the mushrooms in both hands as he opened the container and placed them inside. With a self-satisfied grin, he allowed himself a moment of pride at the haul he would be dropping on his mama’s table in about five minutes. Morels were a cash crop on a good week and a stew-stretcher on a bad one. She would be well pleased because most of the ‘shrooms were big and clean.

In the barn later that afternoon, he’d been working his way through the daily list of jobs, and was measuring out chicken feed. This was normally Tabby’s chore, but at only six, she was too short to reach the bottom of the barrel, and was prone to lean too far, tipping herself inside. So, when it was nearly empty, as it currently was, dipping out a scoop or two of grain on her behalf was far easier than retrieving an angry little sister from the depths of the round prison. It hadn’t happened often, but for him even once was too much, so if he were in a place to do so, he would meet her in the barn of an evening and help fill her bucket. Mikey was head-and-chest inside the barrel, scraping down near the bottom, having tuned out her little voice ratchet-jawing away above him. Tabby was jabbering animatedly about a dolly she’d seen in the mail-order catalog and how her birthday was only four months away when he felt it come over him. A spine-tingling strangeness washing through the air like soot before a storm.

First was the stillness. It seemed like noises were caught on the wind like cottonwood seeds in a cobweb; the waves of sound suspended as if they were dust motes in a sunbeam.

Then Pa’s old mare squealed. The normally sedate horse kicked out hard at the walls of her wooden stall, the sounds she made were both sharp and dull at the same time.

The earth underneath his feet stretched, jolting everything in the barn. It set the tools hanging from the long wall jangling discordantly against each other. Thinner metallic pings of hay tongs fighting against deeper gongs from shovels and rakes. Rattling and tumbling off the wall, falling in an awkward heap along the edge of the floor. Tabby’s voice, raised in a shout, quickly cut off. As fast as the ground had lifted, it seemed scarcely a breath later when it fell back into place, the shudder that accompanied it moving through Mikey’s bones, setting his teeth to aching as it tumbled him into the barrel headfirst. He pressed his hands to the sides of the container, legs kicking, arms working to edge himself backwards.

Finally, sound re-entered the world with a rush, coming with the faraway shrill racket of the emergency whistle three hollers over. Tinny and high-pitched when heard from his location, he knew if he were closer—when he stood under the tower during one of their monthly tests—the sound would beat like a fist, threatening to split his head down the middle with its ferocity. Tabby’s frightened questions echoed through the metal, words warped until they were unrecognizable. “Hold on,” he told her, shoving again and feeling the barrel’s metal lip bite into his waist. “Can’t hear ya, Tabby. Hold on.”

He had barely extracted himself from the barrel when Ma ran into view, coming to a halt in the barn doorway. Chest heaving from her sprint from the house, her eyes were wide and nearly as frightened as the mare’s, showing whites all around. “Mikey,” she half screamed, half yelled, “you see to Tabby. I’ma goin’ to the mine.” She didn’t even wait for his response. She simply whirled on her heel and then raced away, long legs eating the distance, toes flying out in front of her to punch down into the ground. Then her knee lifted and she hit her stride, the kick of her muscles driving her on again. He stood and stared at the slowly swinging door for a long time. Long after she was out of sight. Long after Tabby had gone quiet—questions lodged in her throat as the seriousness settled onto her. Long enough for the siren to cut off, winding down to a silence more painful than the whistle had been.

Something bumped into his hip, and he looked down to see Tabby had her face buried in his side, arms wrapped around his waist. Her grabbing him hadn’t registered, but the sight—her bucket, empty but still dangling from her arm, handle digging into her skin, swinging once again to tap lightly at his hip—broke him from the paralysis threatening to swallow him whole. Carefully peeling her off him, he took the bucket and dropped it into the barrel, then bent in and filled it. “Here you go, Tabs,” he said gently, straightening and holding it out. A taste of normal would help settle them both. “Go take care of the hens.”

She reached and took the bucket from his hands, her little arms strained with the weight. Still facing away from him, her words asked the empty doorway, “When’s Ma gonna be home?”

“I don’t know, Tabs.” Gaze on the same doorway, bereft of movement, stripped of hope, he repeated himself, underscoring his feelings of helplessness at the moment. “I don’t know.” 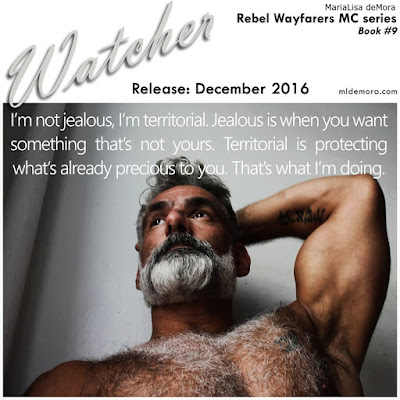 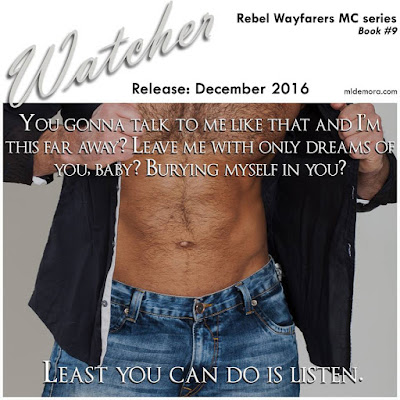 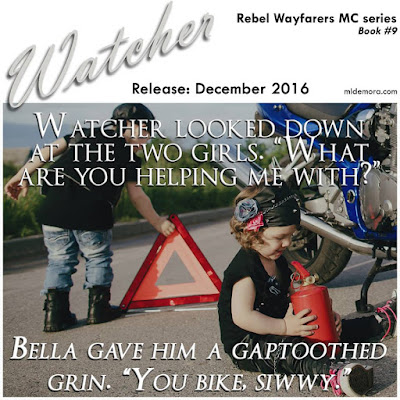 Get Your Copy Today 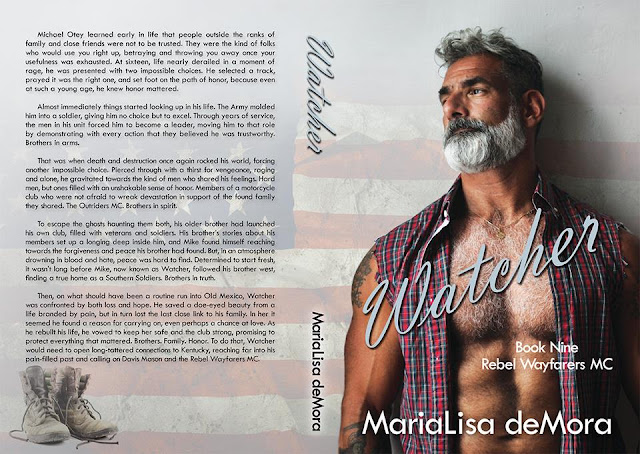 Raised in the south, MariaLisa learned about the magic of books at an early age. Every summer, she would spend hours in the local library, devouring books of every genre. Self-described as a book-a-holic, she says “I’ve always loved to read, but then I discovered writing, and found I adored that, too. For reading … if nothing else is available, I’ve been known to read the back of the cereal box.”

A hockey fan, hiker, gamer, and single mom of a special needs son, she embraces her inner geek and has been working in the tech field for a publishing company for a couple decades.

Music is a driving passion, and she says, “I love music of nearly any genre — jazz, country, rock, alt rock, metal, classical, bluegrass, rap, hip hop … you name it, I listen to it. I can often be seen dancing through the house in the early mornings. But I really, REALLY love live music. My favorite thing with music is seeing bands in small, dive bars [read: small, intimate venues]. If said bar [venue] has a good selection of premium tequila, then that’s a plus!”

Posted by Margay Leah Justice at 8:52 AM