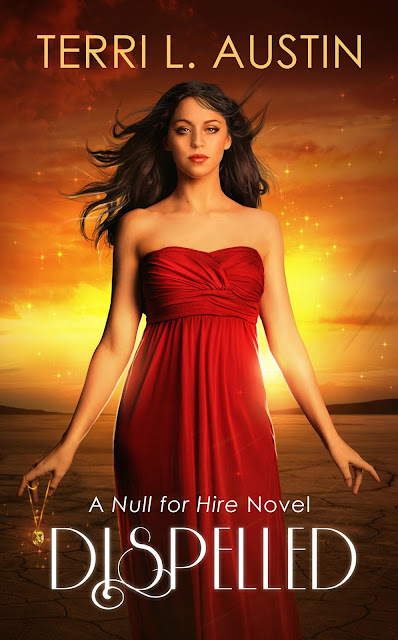 
They call me an abomination. A mutant. A curse on their kind.

I don’t let it bother me. Much.

My name is Holly James, and what they say is true. I’m a freak of nature—a null. My mere presence zaps the magic from Others, rendering them powerless. That’s why they hate me. But here’s the kicker: I’ve found a way to profit from my lack of mojo.

Whether it’s acting as a mystical wet blanket in a dispute between pyromancers or keeping hormonal shifters from changing during a sweet sixteen party, I provide a highly specialized service. For a hefty fee.

When a young witch turns up dead, clutching an amulet cursed with black magic, my estranged grandfather asks for my help. In return for nullifying the necklace, Gramps promises to find my missing mother—a witch who vanished after my birth. Of course there’s a catch. He wants me to assist Cade McAllister, the arrogant sorcerer in charge of investigating the case.

Cade resents my existence, let alone my attempts to help. Still, I’ll do whatever it takes to find my mom. For my own peace of mind I have to know what happened to her, and I won’t allow anything to get in my way. Not even this crazy, irrational longing I feel for a hot sorcerer with the sexiest scowl I’ve ever seen.


Cade stood on my front porch looking good enough to eat. He’d shaved, and his irregular features were even sexier now than when they’d been surrounded by stubble. The scar was more pronounced, too.

Dressed in a white button-down, he’d rolled up the sleeves, showing off his tanned forearms. Leaning one hand against the doorpost, he crossed his long legs at the ankle.

My gaze slipped over him, taking in his jeans, worn and faded in the right places. My eyes may have lingered on the bulge at his fly for the briefest second. His scuffed, black cowboy boots had seen better days.

“Let’s talk in the car.” He didn’t respond, so with an eye roll, I swung the door closed and turned around.

Before he could bank it, I saw the heat in his gaze. He’d been checking out my backside. Mission sit-up-and-pant: accomplished.

“Au contraire, I am going.”

He squinted. Fine lines framed the outer corners of his eyes. “The only reason you’re alive, Null, is because you don’t present a threat to Others. The minute that changes, you’re dead.”

“I’ve been dealing with Others for a long time, Cade. I keep telling you, I can handle myself. Now, did you find any information about the shifter London was dating? Or that vampire, James Sharpe?”

He twitched his lips, baring clenched white teeth. If we were animals, that look would have sent me packing in the other direction. But I was all human, baby, and I wasn’t budging.

“Also, I need to take a look at London’s file.” I wanted to see pics of what he’d found in her house. Surely it hadn’t always been as sterile as the day I snooped through it.

Of course, precious rule number one. “I’ll barely look at it. You can even turn the pages so I won’t sully it with my little null fingers.”

McAllister was a stickler for his details and rules. He wouldn’t let me touch the original, but… “Didn’t you at least make copies? That’s not evidence. Technically speaking.”

He closed his eyes for a second and sighed. “Fine,” he ground out. “If it shuts you up, you can look at a copy.”

That was almost too easy. Still, there was a hint of smugness in my grin. “See, that wasn’t so hard, now was it?”

He took a step toward me, narrowing the space between us. Heat rolled off him, and his delicious smell, mixed with the fresh scent of laundry soap, teased my nose. “Do you really want to play games with me, Little Null?”

I could think of a couple that might be fun. Instead I said, “I could easily kick your ass at Twister. I’m very limber.”

In the dim entryway, most of his face was cast in shadows. But those eyes. They glimmered greener than normal and were full of strong emotions. Anger. Irritation. Sexual frustration. Maybe a dangerous combination of all three? “You want to fuck with me, I’ll fuck right back. But I don’t recommend it.”

His words conjured up images of him moving on top of me, sliding inside me. I felt a little lightheaded from the thought. Clearing my throat, I placed my hands on my hips. The tips of my breasts brushed his shirt, making my nipples hard. His prolonged gaze at my chest told me he noticed. I couldn’t allow myself to get distracted this way. I had a job to do, a reward to collect. Screwing the sorcerer didn’t play into it.

“What I want is a look at your file and a trip to The Raven,” I said. “Since I’m the one who brought all this information to the table, the very least you can do is provide protection.”

He held my gaze and nodded. “One condition.”

He pressed his finger to my lips, silencing me. “We do it my way. It’s the only shot you have of getting out of there alive.”

I may be reckless at times, but I wasn’t an idiot. I liked living as much as the next girl. I nodded, but he didn’t remove his finger. Instead, he used the pad to slowly trace around my lips, robbing me of expertly applied pink gloss. My knees almost buckled when he put the same fingertip in his own mouth, sucking it.

“Tastes like peppermint,” he said in a low, rumbling voice.

If I’d let things continue last night, I’d have had that mouth all over me. Heat suffused my body as I stood transfixed, unable to look away. Not too full, not too thin. Those lips were just right. And they knew how to kiss.

“Understand me?” he asked.

My gaze slowly trailed up his face. As I stared into his amused eyes, my cheeks felt like they were on fire. He knew exactly what I was thinking. “What is your way, Sorcerer?”

“Tonight, we’re a couple. You’re going to keep that smart mouth shut and let me ask the questions. Oh, and one more thing.”

I raised a brow.

“You’re crazy about me.”

“If I were dating you, McAllister, I’d have to be crazy.”

Terri L. Austin is a mild-mannered writer by day and a reality TV junkie by night. She lives in Missouri with her family, and loves to hear from readers.