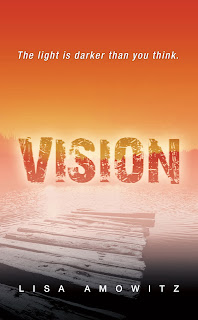 The light is darker than you think…

When seventeen-year-old Bobby Pendell begins to have blinding migraines followed by frightening hallucinations, he fears there’s something wrong with him. Then murder rocks his sleepy town and the visions that put him on trail of a killer—also make him the prime suspect.

Lisa Amowitz was born in Queens and raised in the wilds of Long Island, New York where she climbed trees, thought small creatures lived under rocks and studied ant hills. And drew. A lot.When she hit her teens, she realized that Long Island was too small for her and she needed to escape. So she went to college in Pittsburgh. Go figure.On leaving college, Lisa became a graphic designer living in New York City. She eventually married her husband of a zillion years, had two lovely children, and was swept away to a fairy tale life in the Bronx, where, unbelievably there are more trees and wilderness than her hometown. She can see the Hudson River from her kitchen window.Lisa has been a professor of graphic design at her beloved Bronx Community College where she has been tormenting and cajoling students for nearly seventeen years. She started writing eight years ago because she wanted something to illustrate, but somehow, instead ended up writing YA. Probably because her mind is too dark and twisted for small children.BREAKING GLASS which was released July 9, 2013 from Spencer Hill Press, is her first published work. VISION, the first of the Finder series will be released in 2014 along with an unnamed sequel in the following year. LIFE AND BETH will also be released in the near future. So stay tuned because Lisa is very hyper and has to create stuff to stay alive.
Posted by Margay Leah Justice at 8:45 AM