Book Blitz and Giveaway: Leap of Faith by Jamie Blair

The Teen Pregnancy Book That’s Not
by
Jamie Blair

A handful of times over the past couple weeks, I’ve spotted Leap Of Faith being called a teen pregnancy book. The funny part of this to me is that the teen, Faith, in my book is never really pregnant. But, she does pretend that the baby, who is actually her newborn sister, is her own baby and the situation she gets herself into does make her a teen mom.
Faith, having grown up with an addict for a mom, more often than not with no food in the house, knows that her baby sister is in for an even worst childhood than she had. What starts in Faith’s mind as getting back at her mom turns into an enormous sacrifice as she takes the baby and goes on the run.
Taking care of a newborn isn’t glorified in Leap of Faith and that’s not because as the author I wanted to make the book a preachy, issue book. I wrote it for entertainment, not as a warning to readers. Having a newborn is portrayed as touch because it really is. Having a newborn is insanely hard. Anyone taking on the task of raising a baby needs a support system, and this is where Leap Of Faith gets tricky.
Faith not only finds her support system, but she finds the family she’s never had and always wanted. But, in the back of her mind, she knows her time there is limited. She’s told so many lies, it has to come to an end somehow.
When it all does come crashing down, Faith has a second sacrifice to make. She’s grown to love the family—and the boy—who have taken her and her baby in. But, in order to keep them from being implemented in any legal action Faith might face for kidnapping the baby, she knows she has to leave the perfect life she’s found behind.
Leap Of Faith isn’t a teen pregnancy book. It’s a book about sacrifice, love, family and hope. 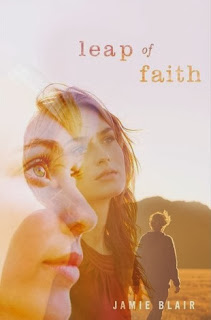 Synopsis:
Can true love be built on lies? A teen on the run seeks relief and redemption in this gripping, romantic read.

Leah Kurtz has finally found a place to call home, a town where she and baby Addy can live in peace, far from the drug-infested place she grew up. Chris is one of the best parts of her new life, the only person who’s ever made her feel safe. And now that she’s found him, there’s no way she can tell the truth:

Her real name is Faith, not Leah. She’s seventeen, not nineteen. And the baby isn’t hers—Faith kidnapped her.

Faith’s history catches up with her when a cop starts asking questions and Chris’s aunt spots her picture in the newspaper. She knows it’s time to run again, but if Faith leaves, she’ll lose Chris. If Chris is in love with a lie, though, did Faith ever really have him in the first place?
Goodreads: http://www.goodreads.com/book/show/17299264-leap-of-faith?ac=1

Jamie Blair spent most of her teen years choreographing moves for her dance team routines, kissing boys on the couch after her mom went to bed, and pondering the mood enhancement qualities of Lemon Heads when consumed with Diet Coke. Writing under Kelli Maine, she’s the USA Today bestselling author of Taken. Leap of Faith is her debut New Adult novel. 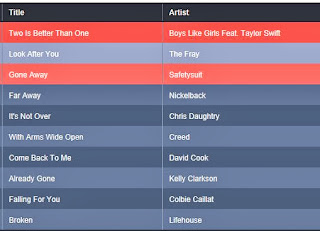 Excerpt:
After a few minutes of Chris flipping through the channels with the remote while we eat, I have to break the silence again.  “How was work?  Where do you work, anyway?”
“I have a glamorous job roofing houses for RJ Roofing.”  He leans back and rubs his stomach.  “I’ve been there a couple of years.  It’s not bad.  They’re good people to work for.”
“That sounds horrible to me.”
He lifts one eyebrow.
“I’m terrified of heights.  I couldn’t ever go up on a roof.  Plus it has to be about a hundred and fifty degrees up there.”
He chuckles.  “It is.  And you come home covered in tar and dirt.  But the pay’s good.”
“How long have you played the guitar?”  I look down at my hands.
I can’t stop asking questions.
I hate that he won’t ask me his own questions even if I won’t answer them anyway.
He stretches both arms over his head and yawns.  “About five years.”
I nod and tuck my hair back again.
“Here.”  He reaches into his pocket and shoots me with a rubber band.  “For your hair.  It’s not going to stay behind your ears.”  His smile’s easy.
Tonight, his eyes match his dark blue shirt.  I like his chin length hair down.  It makes the angles of his face softer.  Faint stubble has grown on his chin.  No wonder I’m obsessed with him.  He’s hot.
My eyes make their way back to his, and I can tell he knows what I’m thinking.  I shift to peer at the TV, feeling my pulse race.  I ball my hair on top of my head and wrap the rubber band around it.
“Faith,” he mumbles.
I jerk around.  “What did you say?”
“The tattoo on the back of your neck, it says hope and faith.”
I reach around with my hand, covering my tattoo.  It’s a banner inside angel wings with our names on it.  Hope and Faith.  My sister and I got them last summer.  It took me forever and five days to talk her into it.  She got hers as a tramp stamp, thinking she could hide it.  More people have seen hers than mine since her track pants sit low on her hips.
“Yeah.”  I swallow my fight or flight instinct.  “Do you have any tattoos?”


In one swift movement, he whips off his t-shirt.  There, in the middle of his tan chest, beside a smear of paint, is a cross with two dates inscribed on it.  One across, one down.  Its intricate design has my fingers itching to touch.  Instead, I crawl on my knees around the table to get a closer look.

Prizes (open US only): 10 winners: --5 prize packages of a signed hardback, a t-shirt and a guitar pick, --5 e-books with an autographed Leap of Faith notecard, a guitar pick and stickers:

a Rafflecopter giveaway
Posted by Margay Leah Justice at 9:38 AM