Charlotte Ferro is about to jump.
Yet nothing ruins a perfectly good suicide attempt worse than a handsome do-gooder. After William O’Reilly convinces her to take one last ride with him, Charlotte finds herself forgetting about her own problems and enjoying a world of which she never dreamed.
Now addicted to the rush of fast cars and cool criminals, Charlotte finds herself leaning less towards the ledge and more toward the arms of her savior. But with reasons of his own for keeping Charlotte safe from herself, William is reluctant to involve her in his criminal undertakings. Will his career choice keep them apart? Will Charlotte’s painful past? 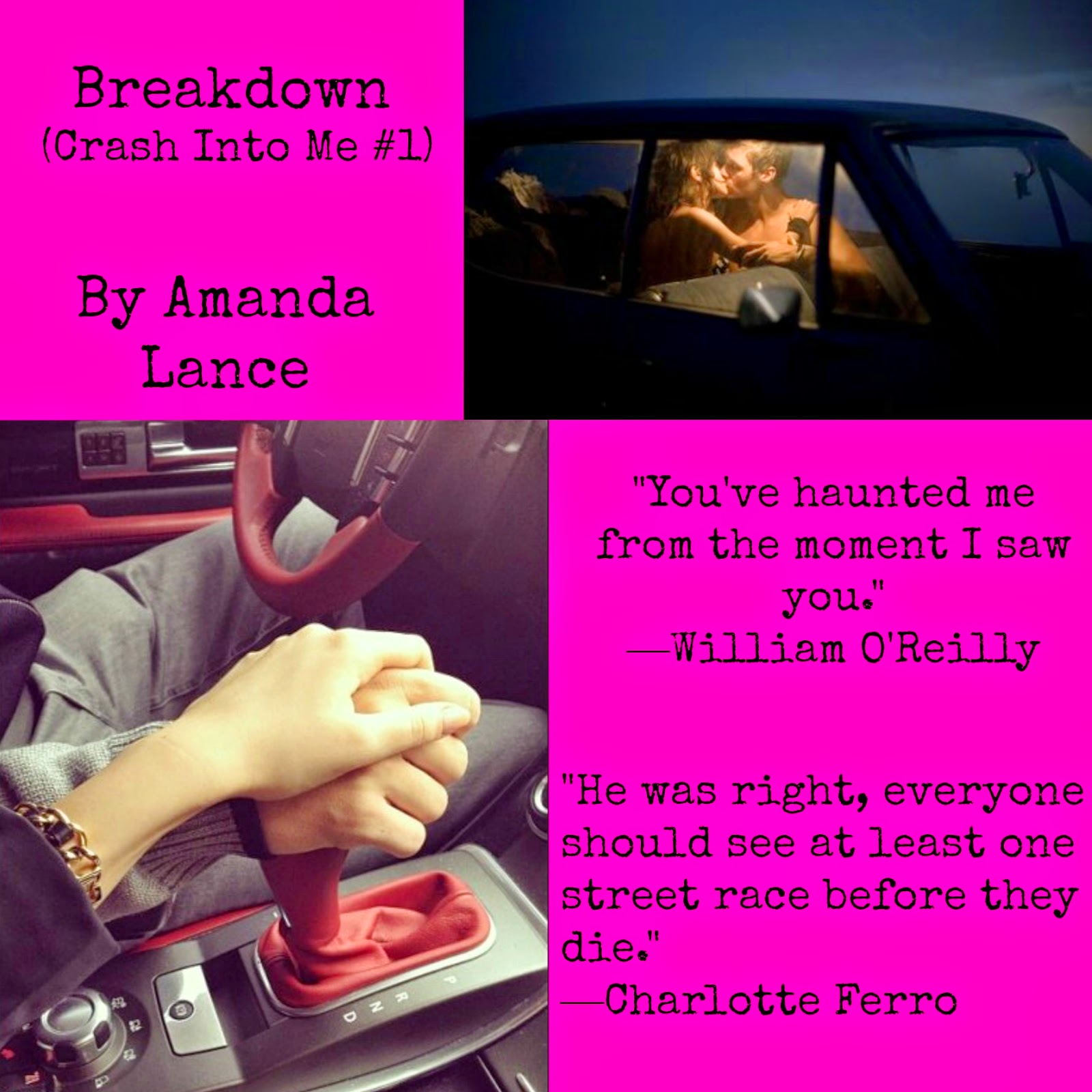 
I met him out in the rain, smiling under my vinyl hood, but trying not to seem overeager. Through the rain, the smoke from the tailgate blended together with the fog the evening rains brought on, and for a moment I pretended to stare at it, standing at the end of the driveway in case he was watching for me. And, when the passenger side door opened, I knew he was.

“Hey!” I tried shaking some of the rain from my jacket and slipped inside. Wearing a long-sleeve Henley with the sleeves rolled up, I noticed right away how the blue of his shirt made the stars on his arm pop. Instead of staring at them, I tried to focus instead at the gray beanie that made his messy hair look even messier.

“Hey yourself, Jumper.” He smiled and looked me up and down.

Frankly, I was surprised he hadn’t invited himself in and already made himself home. “How’s the car running?”

I smiled and leaned my head against the sear. “More like walking—or fast crawling, but it’s better than nothing.”

“What are you doing here?” I stared off at the windshield and silently prayed for the word race to come out of his mouth. “I thought you had to work tonight.”

William stretched his arms out over the dash and sighed. “If it’s okay with you, I don’t want to talk about work.”

If he didn’t want to talk about his night job then it definitely must not have involved cars. Still, I honored his request and didn’t ask him about it further.

Though my eyes had adjusted to the dark, I blinked hard and focused in when I saw his right hand. A dirty, white rag had been wrapped around the base of his knuckles to the top of his wrist, and while it was dark and dingy, almost black after drying, the sight of blood was a distinct one I couldn’t ignore. Without even thinking about it, I reached for him the same way he had reached for me the night before. Like me, he gave the limb over willingly.

“Christ, what happened to your hand?”

Reaching for the overhead light, I could see it was bad without even really seeing it. William flinched when I tried to move the makeshift wrap, but when I looked up to apologize he was smiling at me just enough to let me know he had just been joking.

“Because we almost match? You’ll need stitches for this. Do you have insurance? Are you a union member? I think there are some hospitals where you only have to give them your member number…”

He chuckled and slid his hand out from mine. For a second I was offended, but when he rubbed his eyes and shut off the overhead light, I realized he was probably just tired. Maybe not as tired as me, but tired regardless.

“I’m not worried about my hand, Jumper. I can take care of it at home just as easy, you know that.”

“What—how did you do that?” I nodded to his hand and put on my seatbelt. Though the likelihood of us going anywhere was less and less, I wanted to let him know that I was ready. “You didn’t hurt yourself on purpose, did you? Because I’m pretty sure I trademarked that last night.”

Chuckling, I couldn’t tell if he was entertained by my worry or my attempt at humor. Still, I laughed a little along with him. “No, Jumper, nothing like that. I was trying to, ah, get something open and I wasn’t paying attention, stabbed myself with a screwdriver.” He added the last part absent mindedly, as if his own flesh were irreverent. How he could feel that way about himself when he was clearly an important person frightened me. If William thought someone as wonderful as him didn’t matter, what possible chance could I have? I shook my head and glared at him.

“What was so distracting that you felt the need to stab yourself?”
William stopped laughing then, and looked at me with an intensity I had only seen him give the road. “You.”

Taken aback, I looked away, unable to take his stare when it was so unrelenting. “What?”

“All day long I’ve been thinking about what you did yesterday, what you told me.” He closed his eyes and gripped the wheel. “What you didn’t…”

“But you owe me something, right?” The smile was back in his voice, instantly breaking the tension between us. While a respectable girl might have, maybe should have, been offended, the offhanded remark was more flirtatious than dangerous. I, therefore, did not think twice about the fact that we were outside, alone and in the dark.

“Don’t worry, Jumper, I’d never ask you to do anything if I didn’t think it wasn’t kosher.”

Though it was dark, I looked away, unsure whether or not he could see me blush. “Says the Catholic.”

“Seriously, did you mean what you said earlier about owing me a favor?”

“Good.” He smiled. “Then instead of thinking about talking to somebody, I want you to do it.”

“They have hotlines you can call, shrinks who work for free, I know a priest who is a pretty good listener—”

“Why does this matter to you so much?”

“You mean why do you matter to me?”

“I—” Smiling, he shook his head. “It’s complicated. But let’s just say I get a rush out of you, Jumper, and I don’t want you to go away anytime soon.”

“Yeah.” He laughed. “Are you going to argue with me about that too?”

Instead of saying anything, I rested my head against the cool glass. During the steadier streams of rain, the pitter-patter would echo in my eardrums, undermining the headache that threatened me from too much caffeine and a lack of sleep. I closed my eyes and inhaled the combined scents of William and the rain.

“No, not tonight,” I said eventually. “But no guarantees about later.”
When I opened my eyes again, he was smiling. 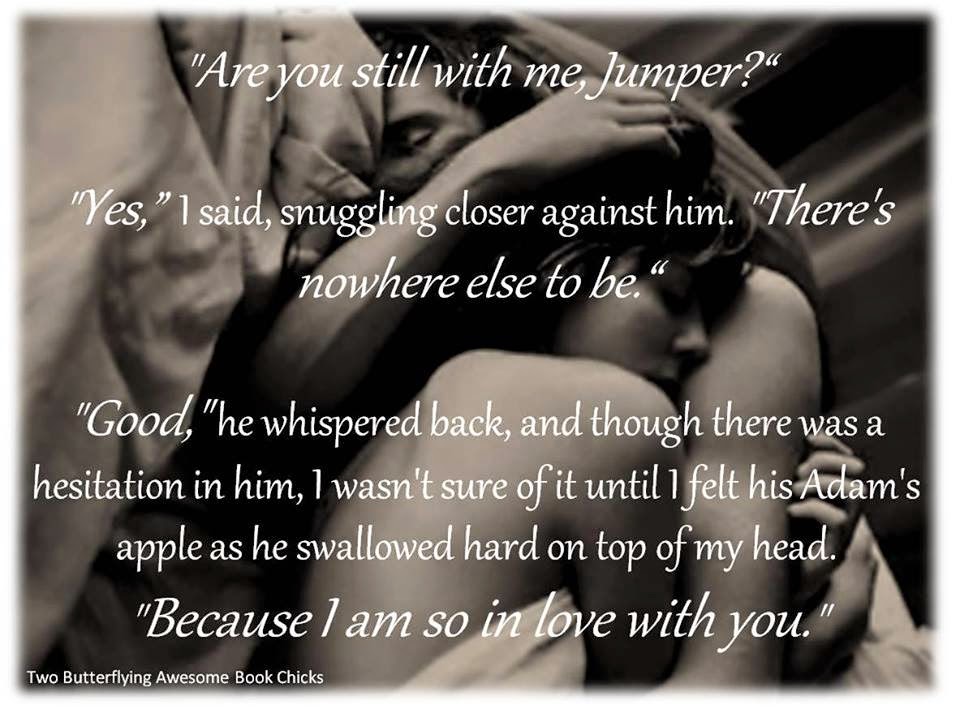 A native of New Jersey and lifelong nerd, Amanda Lance recently completed her Master in Liberal Arts at Thomas Edison State College after her BA in English Literature and AFA in creative writing. As an avid reader of all genres, some of her favorite authors include Hemingway, Marquis de Sade, Stevenson, Bukowski and Radcliffe.
When she isn’t writing or reading, Amanda can found indulging in film noir or hiking with her other half and their extremely spoiled dog. She is obsessively working on her next book and trying to tame her caffeine addiction.