Elias Anderson believes he can right the wrongs of the world.
As a member of the Rebel Souls, a self-appointed vigilante group whose only goal is to take down those who prey on the innocent, he is trained to kill or be killed.
Claire Olsen wants revenge.
After being attacked and left for dead, she is forced to watch her sister’s kidnapping. When the police refuse to pursue the case, she decides the only thing left to do is to take matters into her own hands, even if that means becoming a Rebel herself.
Elias knows how to deal with the new Rebels.
To ensure her loyalty, he must train her. And to train her, he must break her. But Claire refuses to give in and let a man strip her of who she is. Her stubborn ways and feisty mouth only deepens Elias’ desperation for control while she revels in knowing she is the reason behind his slow undoing.
It’s not until they discover the truth about her sister’s disappearance that everything inside their already dysfunctional world changes and they soon learn that their survival depends solely on one another.
The line between right and wrong will be blurred.
Blood will be shed.
And the guilty will pay.
Add to Goodreads: http://bit.ly/1AfG7nO

Check Out The Cover!!

And the full cover wrap 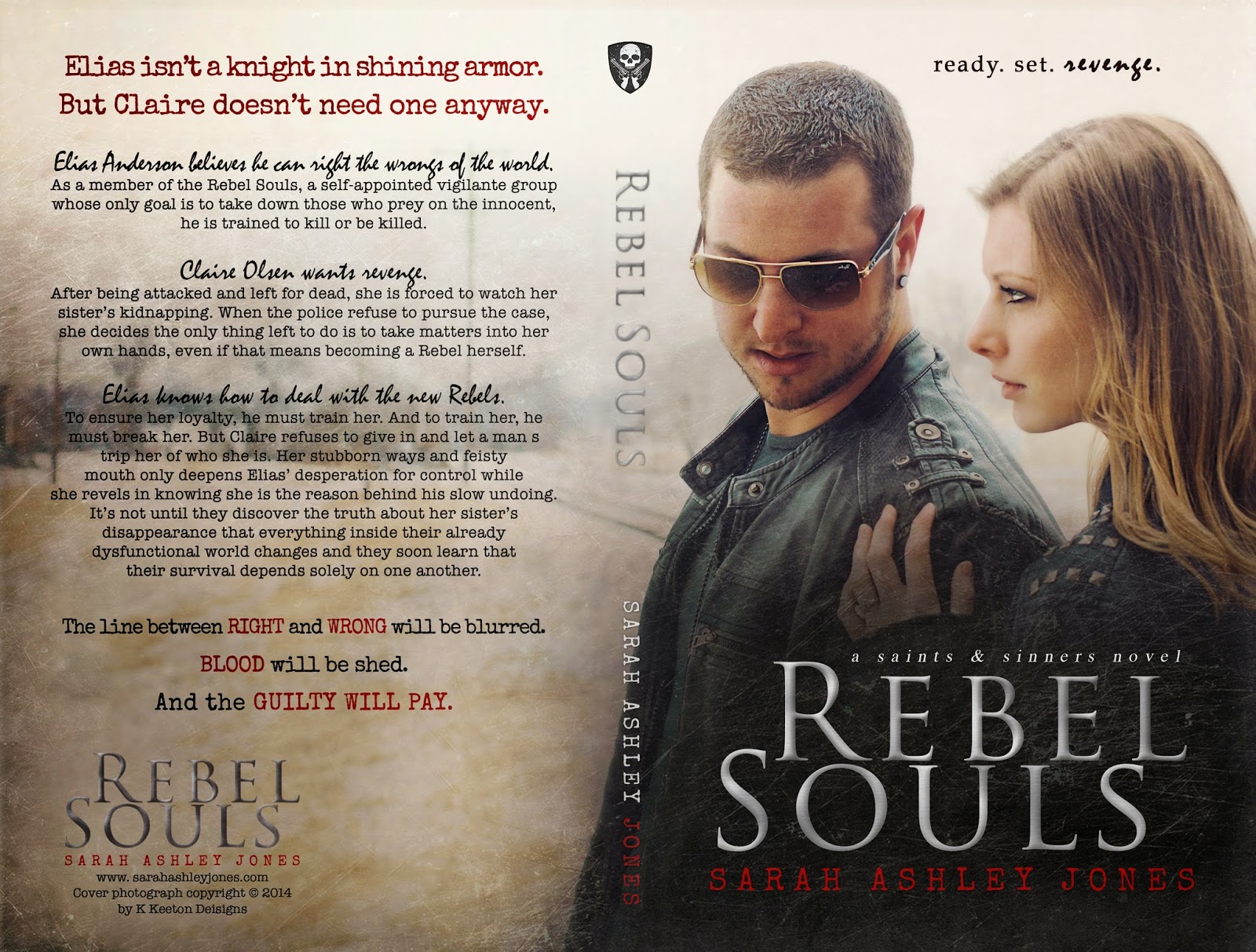 “You want answers, Blondie.” Claire turns her head and I snatch her chin in my free hand. “You truly want to know what it feels like to kill somebody - to watch the life drain from a stranger’s eyes because of your actions?” Her heart beats against my chest and I drop my hands to her shoulders, spinning her around and forcing her down into the chair next to us. Her knife pings as it hits the concrete floor. “It feels like nothing else in this world.” I lean forward, pushing all my weight into my palms as they rest on the arms of the chair. “It’s every feeling a person could possibly experience all at once. It’s blissful, calming, terrifying, satisfying, excruciating, but most of all - it’s powerful,” I whisper the last part. “Once you finally do it, murder someone, you can’t go back. You carry them with you anywhere you go. You see their faces when you sleep. You see their eyes when you at your own in the mirror. It doesn’t matter if they were a saint or a sinner. You become the reason they no longer exist. Do you really think you can do that, Claire?” I’m stuck staring at her, watching the way her lips parts as she nods, her sharp breaths cascading over my cheek. Her intense eyes seek solace in mine as if she’s listening to a bedtime story - not a horror story like how it plays in my mind. “Then why do you continue to do it?” It’s a simple question. Eight words I ask myself day in and day out and depending on when you ask me, I will answer differently each time. “Because if I don’t - no one else will.”

Sarah Ashley Jones was raised in San Diego, California, but currently wrangles her three dogs in Clarksville, Tennessee. When she's not writing she works in a pottery studio and comes home covered in paint on a daily basis. She has a slightly unhealthy obsession with cupcakes, chapstick, and all things Alice in Wonderland. She is an eternal optimist and can often be found dancing and singing to music at any given time. It's rare to see her not smiling or laughing, but if you do, just bring her a cupcake and it will cheer her up.
The books of the Promise Me Series is the first novels Sarah Ashley Jones ever sat down to write. The story weaseled into her heart and wouldn't leave her alone until she typed it all out. Now, stories won’t stop making themselves heard as she continues to write whichever character’s story is the loudest!
She is a lover of all things adventure and romance and is constantly working hard on future releases. Her overactive imagination probably has something to do with being a theatre geek as a child and teenager and now she puts it to good use as an adult, creating and sharing stories that many already love.
Facebook: https://www.facebook.com/AuthorSarahAshleyJones
Twitter: https://twitter.com/sarahashjones
Blog: http://www.sarahashleyjones.com
Instagram: http://instagram.com/sarahashjones
Goodreads: https://www.goodreads.com/author/show/6971371.Sarah_Ashley_Jones
Posted by Margay Leah Justice at 9:00 AM