We're excited to share the cover and an excerpt from SILENT NIGHT by Kristen Strassel! Let us know what you think! 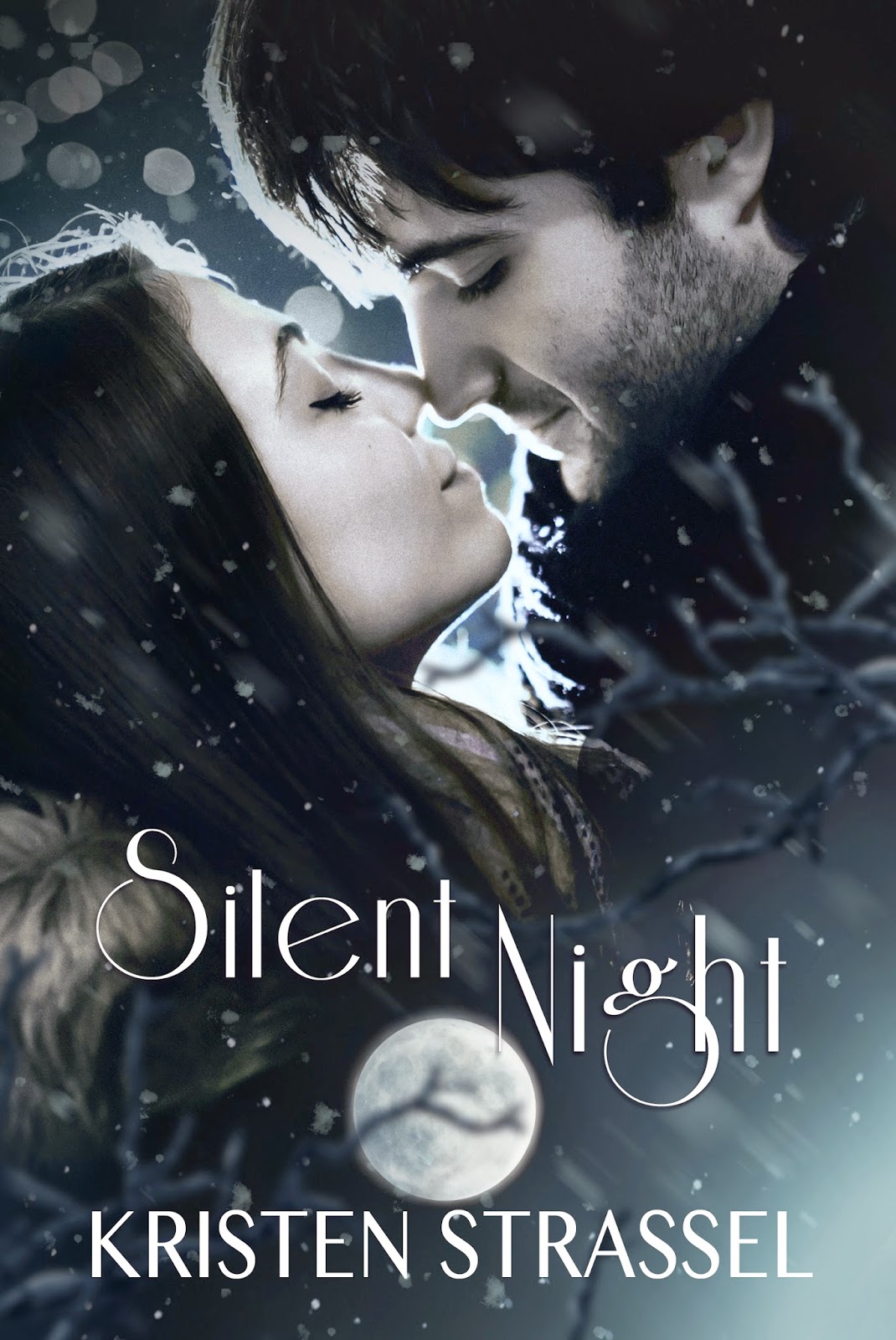 Blurb:
This Christmas isn’t about celebration for eighteen-year-old Kyndra, it’s about survival. Grieving the loss of her grandmother and struggling with the indifference of her family, Kyndra now splits her time between her dead-end mall job, her junkie ex-boyfriend’s bed, and the streets. Longing to be close to her grandmother one more time, she wanders into Christmas Eve mass and prays she’ll find the place she belongs. Home.

Aidan isn’t ready to let go of the past either, even though he’s had nearly three hundred years to do it. He chronicles the search for the reincarnation of his beloved wife as the vampire romance author Allison Duprois. Aidan knows the wife he mourns is out there, but fears writing their story is as close as he will get to her.

At Christmas Eve mass, he finally finds her. Alone, with no place to go.

Aidan brings Kyndra into his home, and gives her the safety, comfort and love she longs for. Though he gives her second chances she never thought she’d have, Kyndra still can’t get over Aidan’s mysterious past. Not to mention that he claims that he’s a vampire. Life alone on the streets is dangerous enough without handing her trust and love to the wrong person. Can Aidan break through the walls around Kyndra’s hardened heart to convince her that she belongs with him, forever?

*This is a companion novel to the Night Moves Series. 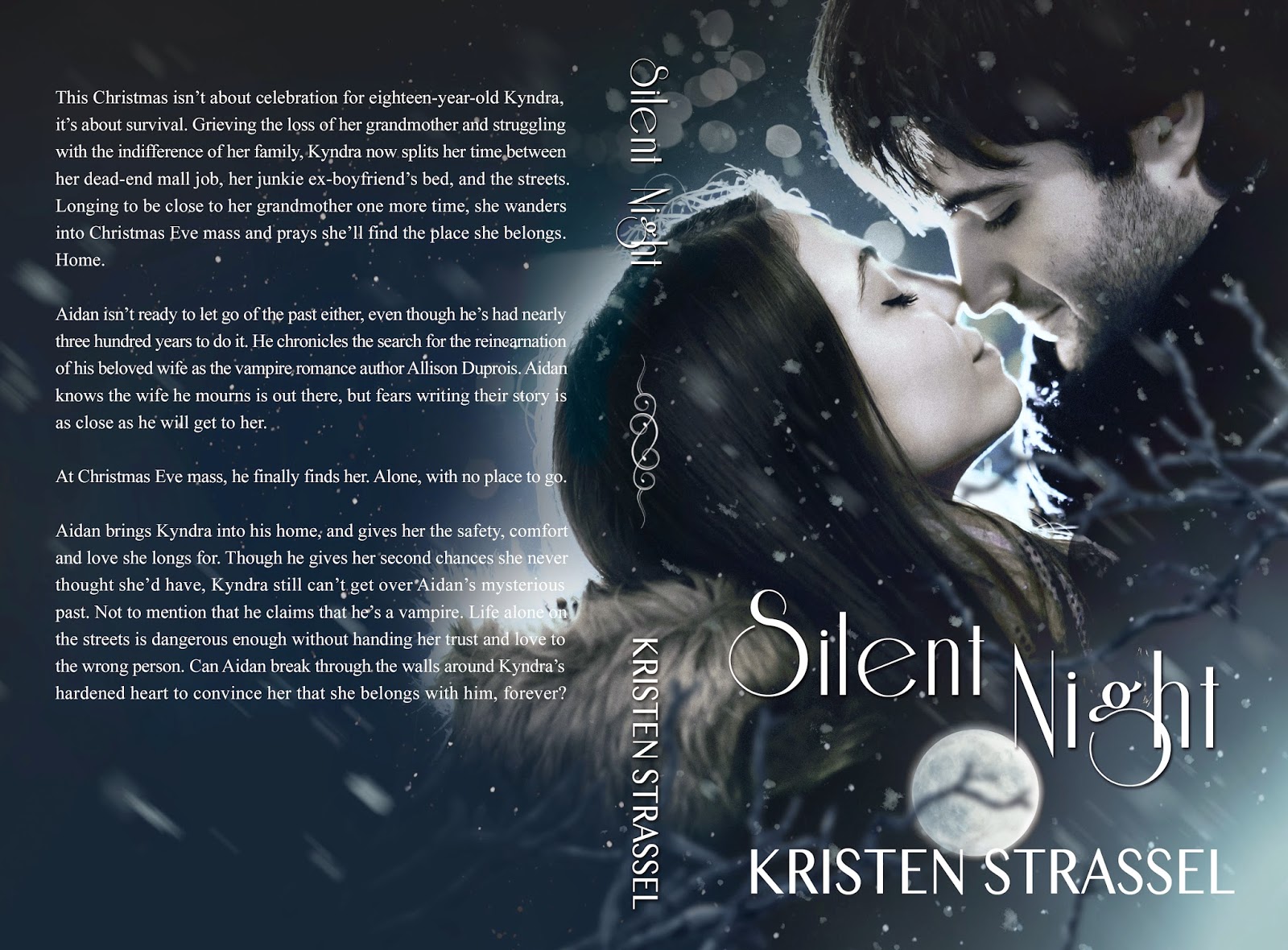 EXCERPT
Mulicolored shadows fell on the snow at the intersection. It didn't look like streetlights. Curious, I picked up my pace and headed towards the soft blue and orange glow. All my muscles relaxed when I realized what I was looking at. Stained glass.

Families began to file into the large church for Midnight Mass. A tall, proud stone building welcomed all without judgement. Even me. Memere had gone to church religiously. That had been one of our jokes. But once I was old enough to have a say, she couldn't talk me into going with her anymore.

I headed in, curious to see if there really was a God. Maybe Memere was right all along. This was how we'd spend Christmas Eve together this year.

I smiled to no one as I sunk into a pew in the back row and shrugged out of my layers of outerwear. Thankfully, my all black work uniform looked dressy enough to fit in. I picked up the hymn book and flipped through, finding peace seeing the familiar songs. For the first time in five months, I felt like I wasn’t alone.

"I was hoping I'd see you here." A man who I didn't know sat next to me. He brought the cold in with him. He smiled at me, one of those smiles that was warm and genuine and reserved for people you knew. I smiled back at him, puzzled. Something about him was familiar, but I didn't know what.

"I don't think I know you. Do I?" I stumbled over my words. This didn't look like someone who would be friends with me. Maybe he was a teacher, or a doctor? "I'm kind of embarrassed if I do."

The man looked as surprised as I did. And a little disapointed. "I'm sorry. Maybe I thought you were someone else? I'm Aidan." He held out his hand to me, and I excepted his firm, sure handshake.

"I'm Kyndra." I searched his face, his person, trying to place him. Dark hair flopped down on his forehead, almost obscuring his equally dark eyes. He had high cheekbones, the beginnings of five o’clock shadow and full lips. Stop looking at his lips, Kyndra. You're in a church, I reminded myself. Lust was probably covered in the Ten Commandments and off limits in this building. I forced my eyes down. He wore a gray suit for the occasion, his light blue tie looked icy against his tawny skin. I always appreciated when people dressed up for special days. Had I planned to come here and had access to my dressy clothes, I would have dressed up tonight. Too many people in this building couldn’t be bothered with anything better than jeans and sweatshirts. I brought my eyes back up to his. He had watched me look him over, and from the crinkles in the corners of his eyes, he was amused.

"I know," he said quietly. He didn't break his gaze. I should have been creeped out, but honestly, I think I would have been disappointed if he‘d said or done anything else.

I didn't know how to react, so I looked down to the hymn book in my lap, scrambling to find the page with tonight's mass program on it. What the hell was going on in this church?

"Have you been here for Midnight Mass before? It's a beautiful service," Aidan continued, either oblivious to or feeding off of my awkwardness.

"No. I used to go to church with my grandmother, but it's been a while." I stole a quick glance up at him again. Had I waited on him at work? That wouldn't make this any less weird. I worked at a lingerie store. Either he was shopping for someone else, or for himself. That happened more than you’d expect. And with the people you least expected. Either way, I shouldn't get involved. He looked at least fifteen years older than me and more than a couple of tax brackets richer.

But he probably had a nice, warm house to go to after the service. Maybe a condo in a triple decker. Or a high rise apartment. Single families were few and far between in Boston. If he had one, he had a family. I fought disappointment at that thought.


Kyndra, you will not follow some strange man home on Christmas. No matter how much you think you know each other. No matter how good looking and put together he is. That's how you wind up in pieces in a cardbox in some random lot. That’s how you became the lead off story on the nightly news.
"My grandmother brought me to church when we were kids, too. I miss that. I can't find services in French around here."

"You're from France?" Oh, this guy was just too much.

"No. Quebec." He said with a chuckle. Okay, that was better. There was nothing sexy about Quebec. "But I try to stay true to my nature."

"And what is that?" I was intrigued. He seemed sincere, but I was beginning to think he was just a complusive, lying weirdo alone at church on Christmas Eve. "And where is your family tonight?"

"I like to take care of people." He said without any pretense. I wanted to roll my eyes so badly, but still, he seemed to mean it. And I could use some of that. Stop thinking like that, I yelled at myself silently. You're just going to get yourself in trouble.

Maybe that's what I want, my inner dialogue continued defiantly.

"My family is scattered throughout the country," Aidan continued. "What about yours? You're not all alone on Christmas, are you?" The service was about to start and the pews began to fill. I had to slide in, so close our legs touched.

I panicked, not knowing how to answer the question. He'd know if I lied to him. He knew too much. And I didn't know why.

"It's not so bad." I didn't look at him, or the book. I stared blankly ahead, watching families file into their seats. The blur had to be unshed tears.

"No one should be alone on Christmas." Aidan squeezed my hand, but neither of us had a chance to say more before the service began.

Kristen shares a birthday with Steven Tyler and Diana Ross. She spends each day striving to be half as fabulous as they are. She’s worn many hats, none as flattering as her cowboy hat: banker, retail manager, fledgling web designer, world’s worst cocktail waitress, panty slinger, now makeup artist and author. She loves sunshine, live music, the middle of nowhere, and finding new things to put in her house.