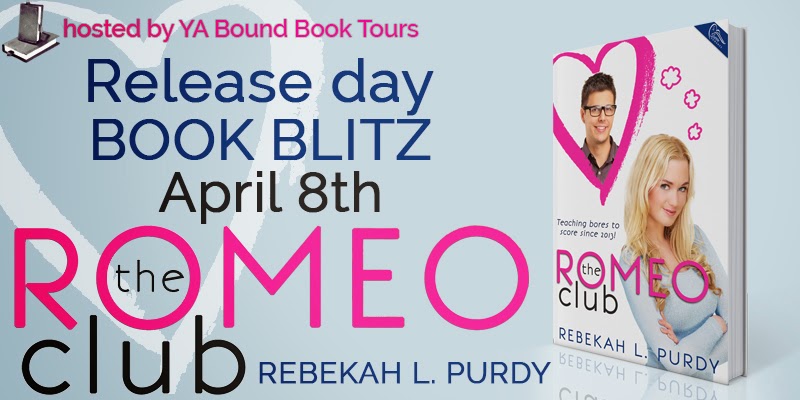 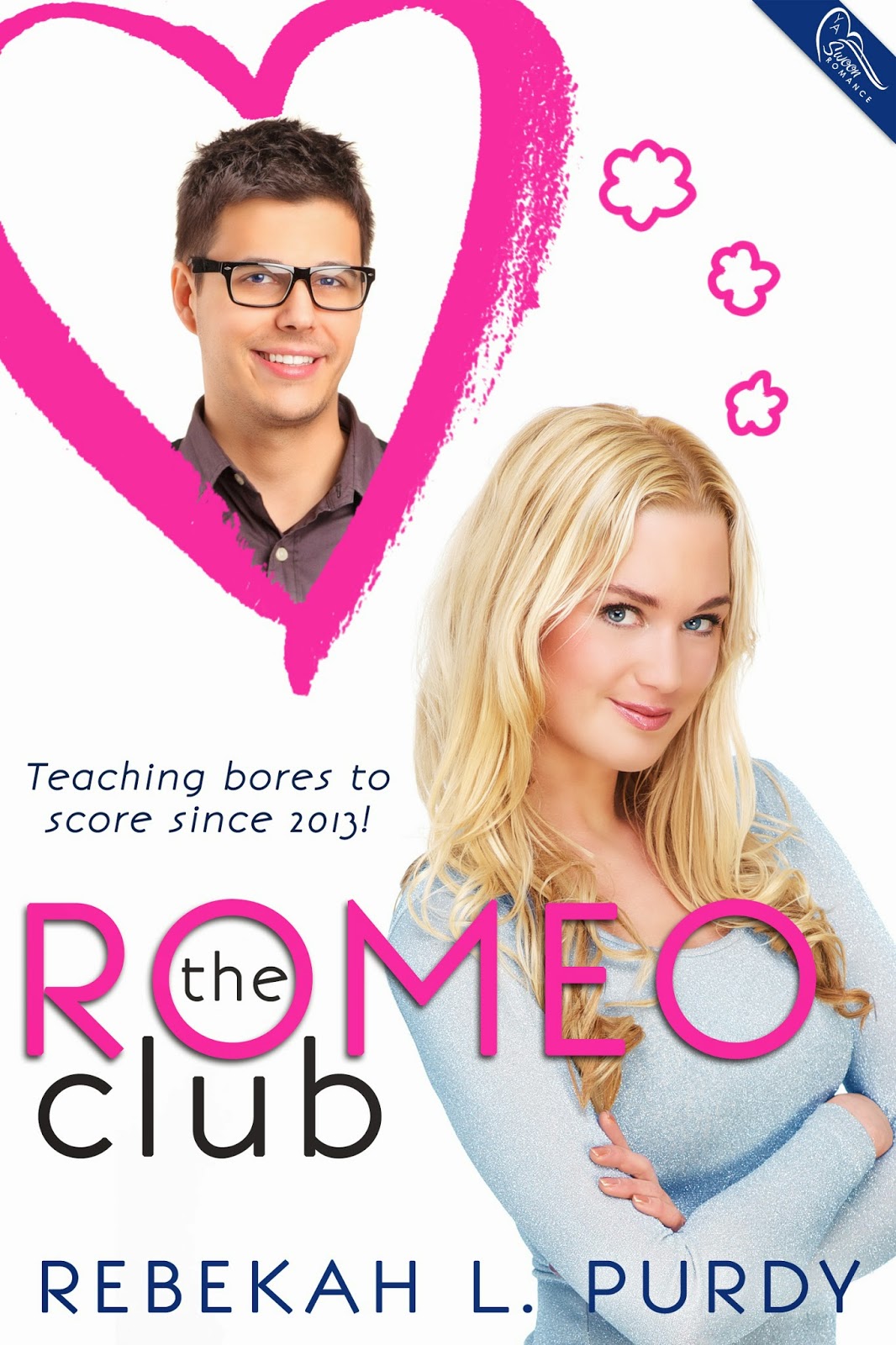 Summary from Goodreads:
THE ROMEO CLUB is Hitch meets The Secret of My Success.

What happens when you agree to help your brother “de-nerdify” so he can catch the attention of the popular Chloe Anders, and to everyone's surprise, he actually lands her?

And what if his equally geeky friends come running with girl wish lists of their own, offering money for your services?

Well, if you’re sixteen-year-old, Delyla Denson, then you start The Romeo Club. A secret club where she’ll teach these guys how talk, act, and be cool around girls. It’s a win-win situation.

She’ll get enough money for the awesome prom dress she’s had her eye on, and the guys, well, they’ll get dates and maybe learn how to do something other than beat the next level on their video games.

There are only two problems with this plan. One, her quarterback/track star boyfriend is getting jealous of how much time she’s spending away from him and decides to try and figure out what’s going on. And two, Delyla is kind of falling for her brother’s BFF, Trey who she’s been hanging out with a lot more. And who thanks to her help, has caught the attention of the beautiful, perfect, and popular, Portia Rickard. With Portia and Trey heating up, Delyla realizes that maybe the person she’s meant to be with has been in front of her all this time.

But falling for Trey means she’ll have to take drastic measures including sabotage, with a capital S.

Rebekah Purdy grew up in Michigan, where she spent many late nights armed with a good book and a flashlight. When not hiding at her computer and getting lost in her stories, she enjoys reading, singing, soccer, swimming, football, camping, playing video games and hanging out with her kids. She loves the unexplainable like Bigfoot, the Dogman, and the Loch Ness Monster (lots of good story material)! She admits to still having all the books she bought throughout her childhood and teen years, and she may or may not have an obsession with anything chocolate…

C.C. here, when I was told I had to come up with a list of my top ten favorite chicks from movies, video games, and comics, I realized that I had WAY more than ten. I mean, have you guys not seen all the movies in the sci-fi section at the video store? Women with laser guns, man. Kicking alien ass. Not to mention my favorite comic book series.

Not that I’m a complete nerd or anything, well, according to Delyla I am, but let’s not get into that. For the purposes of this post, I’ll limit my babe list to ten and pray none of my luscious wonders read this post and feel like I’ve left them out (sorry Padme—you are the mother of the beautiful Princess Leia and you’re on my babe list, but I had a limit).

1).  Princess Leia in Return of the Jedi. My God, she’s hot and her poster is hanging over my bed—and she knows how to use a laser blaster.

2).  Elena Fisher from the Uncharted Video Game franchise. Hottest journalist out there my peeps.

5).  Morrigan from Dragon Age Video Games. This chick is all about the dark magic. Totally hot.

6).  Starfire from Teen Titans (both the comic and the cartoon). Who knew cartoon chicks could be so hot. *growl*

7).  Galadriel from The Lord of the Rings. The most beautiful elf in the world. Long blond hair, powerful, hangs out with cool guys who wield swords and bows.

8).  Lara Croft from Tomb Raider (the video game not the movie). I want to find a badass chick like this!

9).  Zelda from the Legend of Zelda Video Games. Just something about her—don’t judge.

10).  Selene from Underworld. Now this is one vampire I wouldn’t mind having bite me. She kicks massive butt and doesn’t sparkle.

Video game explosions sounded from the family room downstairs, followed by several voices. Great. My brother’s friends, otherwise known as The Nerd Herd were here. Not that I should be surprised. They probably spent the better half of their lives in my basement.

“Please tell me someone didn’t eat the last slice of cheesecake?” I hollered as I tossed my bag on the kitchen floor and searched the fridge.

Ugh. Of course it was him. C.C. Porter IV, whose real name was Clyde Cornelius. I ought to take his red afro and use it to mop up Jimbo’s grossness from our lawn gnome.

“Seriously? You guys are pigs.” With a groan, I stomped downstairs to find all four guys seated in front of the TV, game controllers in hand. “I thought I told you yesterday, the cheesecake is off limits.”

C.C. grinned, his mop of red curls poofed up like five small poodles taking cover on his head. “Aw, does that mean you’re gonna punish me? Because I could use a spanking.” He stretched his long legs out in front of him.

My brother shot him a quick look and mouthed the words don’t start.

“Yeah, come on over here, because I think I’ve got a foot I can shove up your ass.” My eyes narrowed.
“Okay, how about we talk about something else before this turns into World War Delyla.” Trey, Drake’s best friend intervened.

“He’s right.” My brother flipped off the video game. The other three muttered obscenities and whined. “Besides, I need to talk with her about a few things.” He glanced at them as if threatening bodily harm to the next one who opened their mouth.

I moved closer to the stone fireplace at the back of the room, careful not to bump into the mantel where my dad’s antique toy trucks were displayed. Uneasiness settled over me as my shoes sunk into the plush, burgundy carpet. What the heck was going on? My gaze rested on Trey who, even I admitted, was kind of hot—in a nerdy way. Dark brown hair, blue eyes that made you envision summer pools and all that Shakespearean stuff. Not that I’d tell him of course. We’d grown up next door to one another and he, Drake, and I had been best buds since they were two and I was one. We practically lived at one another’s houses.

The Nerd Herd grew quiet as they stared at me. “Okay, you guys are weirding me out. What’s going on?”

“I want a cross between Princess Leia and Wonder Woman,” C.C. blurted.

At the same time, Kevin said, “Maybe someone like the chick from Dark Invaders IV.”

“Um—hold on, what are you guys talking about?”

“Quiet down.” Drake held up his hands then turned to me. “Here’s the thing. I kind of told them about you helping me land Chloe.”

“I thought you wanted to keep it a secret.”

“Yeah, about that.” He gave me a sheepish smile.

“All right. They want you to help them out too. I mean, you did such a good job with me. Besides, you’re already popular and have an in. You could teach them the ropes.”

“Whoa. Are you crazy? How am I supposed to do that? Besides they want some Princess Leia, Wonder Woman, and a Battle Worn hybrid. And in case you didn’t realize, this is reality.” Holy balls. This wasn’t quite what I expected when my brother said he had something important to discuss. Because on my scale of one to important this ranked like a negative ten.

Posted by Margay Leah Justice at 9:58 AM