“Callie is seventeen,” Rowan said to Ash as soon as Callie and Sapphire were out of earshot.
Ash shrugged. “So what? Is that too young for you?”

Rowan held open the door to one of the many unused bedrooms in the palace and the two boys stepped inside. “She’s still a child, vulnerable to the Fallen. The last thing we need is another Immortal wandering around.”

“That’s unheard of, Row. There hasn’t been an Immortal in decades. Not since before the fae diverged into the four cities.”

Rowan went to the window. The city was awake now. The message of the prophetess’s murder had spread like a disease. The fae rushed to the palace in the rain, clutching each other, crying. Rowan knew it would rain for days.

He flattened a hand over his stomach, remembering. It was like seeing his life through someone else’s eyes. It wasn’t Rowan who laid on the floor bleeding out, but some weaker, lesser being. Rowan would’ve known better, should’ve known better. He would’ve saved a life instead of taken one. Seeing the prophetess had sharpened the edges of his memory until the cuts were fresh again. “It’s not as unlikely as you think,” he said.

“I’ve researched Immortals and the Fallen. Their numbers are few.”

“Immortals are immensely powerful, Ash. Just because they aren’t in the recorded history doesn’t mean they don’t exist. Regardless, Callie is a target, here inside the city and now in the human world. She’s not safe anywhere.”

“Is useless,” Rowan said. He watched two unglamoured faeries kiss before entering the palace. The man tangled his fingers into the woman’s thistle hair. Blood stained his hands, her hair, the ruins of their clothes. Rowan wondered what it would be like to be in love so deeply that you wouldn’t notice the pain.

“Why the change of heart? Yesterday you wanted to ship her back to the humans…and suddenly you care?” Ash stood now, joined Rowan at the window. The two lovers had entered into the palace, holding hands.

“I don’t—” care, he wanted to say, but the lie lodged in Rowan’s throat and choked him. “I just don’t think it’s fair,” he amended. Life would be so much easier if he could lie. It was exhausting to plot every word into truth. Now he had Sapphire’s command hanging over his head like a sword.

Rowan could see Ash’s concerned face in the window’s reflection. It pissed him off. “That’ll be great,” he said with a sneer. “The unimprinted non-member and a teacher. Maybe you can teach Hazel the ways of our past, too, counsel her on how a faerie leader is supposed to act because you’re certainly not going to defend the city against the Fallen.”

“I didn’t mean—” Rowan said, regretting his words, but they both knew he had meant it. Ash’s imprint made him an educator, and much like in the human world, it was a thankless job. He taught the incoming fae the histories and how to control their powers. But Ash really wanted to be a warrior. Ash had tried to learn after Rowan had returned to Eirensae.

Rowan could fight, both with weapons and his bare hands, but no matter how many times Rowan went over a block or a kick or patiently explained how to hold a quarterstaff, Ash never got it right. He was always too slow, too uncoordinated. Eventually Ash had abandoned fighting, and the two boys had focused on their mutual love of information. But it hadn’t taken long for Rowan’s knowledge to surpass Ash’s.

“You know what? You’re right.” Ash said, heading for the door. He paused, hand on the knob. “I’ll never be like you,” he said softly, not looking at his friend, “but you’ll never be like me, either.”

Even though Rowan could fight, Ash still had one thing up on him. One, giant, unequivocally important thing. Ash was imprinted. A full, permanent member of the city, whereas Rowan, without his amulet or imprint, was nothing more than a meaningless child, voiceless, worthless.

Ash slammed the door and it was Rowan’s turn to flinch. It was the first time Ash had thrown Rowan’s status back in his face. 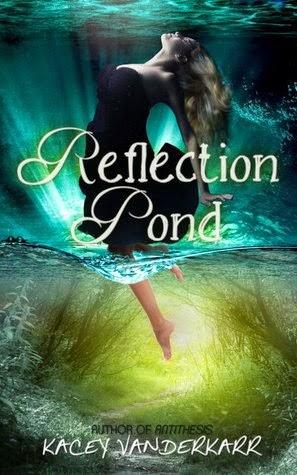 Book Description:
Sometimes you find home, sometimes it comes looking for you.

Callie knows a lot more about pain than she does about family. She’s never belonged, at least, not until she falls through a portal into her true home. The beautiful faerie city of Eirensae doesn’t come free. Callie must find her amulet and bind herself to the city, and most importantly, avoid the Fallen fae who seek her life. Seems like a small price to pay for the family she’s always wanted.

Then she meets cynical and gorgeous Rowan, who reads the darkness of her past in her eyes. He becomes Callie’s part-time protector and full-time pain in the ass. He has secrets of his own for Callie to unravel. What they don’t know is that the future of Eirensae lies with them, and the once peaceful city is about to become a battleground for power.

About the Author:
Kacey Vanderkarr is a young adult author. She dabbles in fantasy, romance, and sci-fi, complete with faeries, alternate realities, and the occasional plasma gun. She’s known to be annoyingly optimistic and listen to music at the highest decibel. When she’s not writing, she coaches winterguard and works as a sonographer. Kacey lives in Michigan, with her husband, son, crazy cats, and two bearded dragons.

Posted by Margay Leah Justice at 10:38 AM