Book Spotlight and Giveaway: The Prayer, a Love Story by Jacqueline von Zwehl 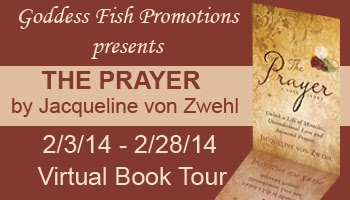 The Prayer, a Love Story 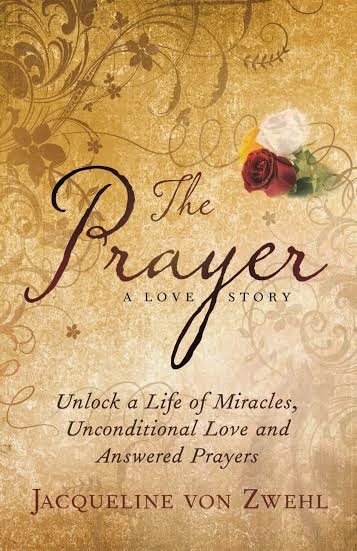 Do you Believe in Miracles?

Do you Believe in Eternal Love?

Do you Believe in Answered Prayers?

The Prayer, A Love Story is the inspirational true story of one woman who discovers the secret to living a life filled with miracles, unconditional love and answered prayers.

The journey begins with a divine promise, continues with unforeseen life challenges, and eventually leads to Jerusalem. Inside the Old City, a prayer will unlock the key to a life of miracles. This journey is proof heaven is real and its gifts are available to you now. Whether you have stopped believing in God or not, God believes in you.

The journey holds a promise for everyone. No matter how much darkness exists in your life, it cannot diminish the flicker of even the tiniest light. That light will lead you to your destiny and it will change your life forever.

As soon as I got in the car, I almost changed my mind. I was exhausted. It had been a long week and, quite frankly, I was not in the mood for a party. Still, I had to go. I’d just say hello to Todd and leave early, I decided. I fumbled around in the dim light, looking for the directions. I had gone to Fort Lauderdale only a handful of times, and I still wasn’t sure how to get downtown.

Todd and I had known each other for years. He was the friend from Long Island who had organized the dismal raft-up that made me decide to leave New York. He was one of the most sociable and fun people you’d ever meet. Once you get on his email list, you’re a friend for life. That’s how he is. Todd was one of the last people I said goodbye to when I moved to Boca.

The previous Tuesday night, he had called. In his classic, larger-than-life style, he said he knew a guy  who had a house in Fort Lauderdale, and he and a big group of friends from Long Island were flying down to stay there for the upcoming boat show. They were throwing a huge party on Saturday night, and I just had to be there.

I was not in the mood even early in the week. I was working long hours at the time, and I was men- tally drained. I also didn’t look forward to partying with a bunch of single guys from Long Island. If it had been anyone else but Todd, I would have politely declined, but we hadn’t seen each other in over a year and a half.

Reluctantly, I accepted, but I added one little white lie. I told Todd I had a boyfriend. The last thing I want- ed was for any guy at this party to think I was single. I did not want to get hit on by any out-of-state guys on vacation. I’d just make a quick appearance and get home early, I told myself.

I pulled up to the house a little after dark. It was a spectacular, newly constructed mansion on the inter- coastal in the Las Olas Isles  of  Fort  Lauderdale. The home was impressive and stately, surrounded by stunning landscaping tall palm trees and a gated entrance. Although the house was huge, it looked quite warm and inviting, as well.

Suddenly, something odd hit me. There didn’t seem to be a party. In fact, hardly any cars were parked on the street. I double checked the address and checked the number on the gate.Yes, it was the right house.Was I too early?

Flashbacks of the cancelled raft-up went through my mind. The last time I got an invitation from Todd  for a supposedly huge event, it turned out to be a small disaster. I swore that if Todd had invited me to this house and there was no party, he was going to owe me big time.

As I started toward the gate, my doubts took over. What was I doing there? I couldn’t hear any music. I considered turning around and getting back in my car, but just then, someone on a Harley parked next to my car. He spotted me right away and made his way towards me. I thought I would look foolish if I turned around and got back in my car.

The tall man from the Harley approached.“Hi, I’m Joe.”

I was starting to feel a bit awkward, but there was no turning back by then, so Joe and I walked in togeth- er. From a grand center hall foyer, we stepped down into a sunken living room accented by a vaulted ceiling and twenty-foot floor-to-ceiling glass windows.

The first thing I noticed was the angel above the fireplace. It was a stunning, hand-carved, six-foot- tall wooden angel with a four-foot wingspan. I stood there staring at it, mesmerized. He was  beautiful. For a moment, I completely forgot where I was or how I got there.

I began to notice my surroundings. This was not the house of a bachelor, as I had assumed. It was defi- nitely a family home. Family photos were everywhere, adults and children covering every wall and counter. In the foyer, an ornate antique Bible and a pile of rosaries graced a coffee table. Crosses and religious pictures adorned every wall. I could see that this home had been decorated by a mother, a woman of faith. It was a gracious and welcoming home.

The moment we walked in, Joe had left my side and slipped through the sliding glass doors leading to the back deck. Obviously, he’d been there before and knew the house well. I’m not sure how long I stood there, taking in my surroundings.

I quickly realized there was, in fact, no party. I was standing in a stranger’s home,  completely  alone. No crowds, no music, and definitely no party. Once again, I contemplated discreetly leaving. Then I heard a voice that seemed to be addressing me.

“Hey, there. I’m Carlos. How do you know Chris?” I followed the voice and walked through a break-fast room to get within view of whoever was talking to me. The voice had come from the kitchen. A casually dressed guy was seated at the island, enjoying his din- ner, and I guess he had noticed me standing by myself in the living room. I probably looked ridiculous just standing there, staring at the angel.

“Hi, Carlos. I’m Jackie. I don’t know Chris. I was invited by my friend Todd.”

“Who the hell is Todd?” Carlos blurted out.

At that point, I definitely felt like I had just crashed someone’s home. What was I doing there? Nothing about this made any sense. Why had Todd invited me to that house? Why had he told me there would be  a  party  there  that  night? Why  didn’t  anyone  there know who he was?

I needed to leave, and by then I didn’t care whether anyone saw me walk out the front door with no explanation. However, as I made my way back through the breakfast room and across the living room, I was intercepted.

A dark-haired man in blue swim trunks barreled through the sliding glass doors into the living room. He didn’t have a shirt on, just a towel wrapped around his shoulders. He was soaking wet, obviously just out of the pool. Oh my goodness, but he was cute! He was also half-naked and smiling at me—and that smile was melting me.

Full of excitement and exuberance, he put his hand out to shake mine and announced,“Hi, I’m Chris.”

Top 10 Things Most People Don't Know About Me - Jackie
1.       This is an absolute fact.  I make the world's best chocolate chip cookies.  I know this is a BOLD claim but it is absolutely true.  My secret recipe is hidden in the safety deposit box and protected from all prying eyes. (Just kidding, if you want the recipe, inbox me : )  In all seriousness my chocolate chip cookies are insane.
2.       This is second absolute fact.  I make the world's best chicken soup.  Again, no exaggeration.  It's quite awesome.  Are you starting to notice a pattern here...I'm very humble in my cooking and baking skills.
3.       I love Vince Vaughn movies.  Nothing else needs to be said on this.
4.       If I had to grow my own food I'd starve.  I've never figured out how to keep any plant alive for more than a week.  Seriously, I just don't understand how anyone grows anything.
5.       I'm "that" mom who's always dropping her kids off at school about one minute after the bell rings.  Believe me, I have tried, but I can't seem to win against that bell!
6.       At night, when I'm all alone I secretly fantasize about...sleeping.  Yes, seriously, my life is so not that interesting.  As a wife and mom, a good night's sleep is better than any fantasy in the world.
7.       My favorite writer to this day is still Jane Austin.  Some things never change.
8.       I desperately want to be on the Dave Letterman Show.  He's so cool.
9.       I am the happiest person you'll ever meet because I'm at total peace in my life.
10.   I have discovered the secret to an answered prayer, living a life full of miracles, and live unconditional love every day.  My joy is contagious so be aware when you're around me.  You may walk away with happiness and a smile on your face : ).