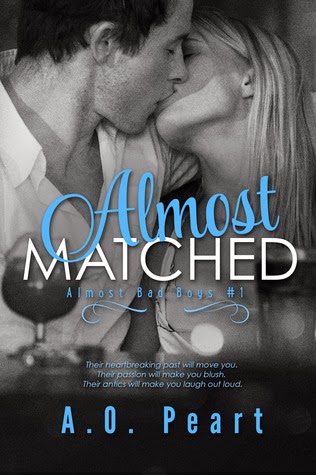 Synopsis of book 1 (Almost Matched):
Would you take another shot at love? Or just settle on a friend with benefits?

Twenty-five-year-old Natalie Davenport lugs substantial baggage. One boyfriend after the next has been a total disaster, leaving Natalie distrustful toward the male population in general. So when Colin Hampton crosses her path, she’s cautious. Her heart (and some other body parts!) nudges her to go for it, while her head wants her to run for the hills.

Colin is one of those gorgeous guys who attract women, no matter the age or marital status. With a successful career at a popular Seattle radio station, hard body, and charming personality, he is the complete package. But something dark lurks in the corners of his soul; some murky experience that has changed him—maybe for the better, but maybe for the worse.

Will he steal her heart and stomp over it like other guys did?

Will she let him into her heavily fortified world despite herself?

Or will they settle somewhere in the middle—establishing the emotional boundaries to protect them from falling in love? Synopsis of book 2 (Almost Broken Up):
How far would you go to protect the one you love?

Edge-of-the-seat suspense and zany wit are key elements of this comedy-mystery that combines crime and mayhem with romance and humor.

The terrors of Colin’s past are revealed and accepted by Natalie. Her doubts about letting him into her life are finally disbanded and replaced by a sense of security and commitment. But Natalie doesn’t know that Colin’s past hides more dark secrets unknown even to him.

When a delusional psychopath threatens Colin’s life, things quickly become complicated. Natalie’s stubborn character and desire to kick ass won’t let her step aside and allow the authorities to handle the danger. She gets herself tangled up with street hoodlums, befriends a Russian mobster’s high-maintenance girlfriend, and becomes expert at picking locks and hiding evidence.

***Warning: contains sexual situations (some quite vivid!), profanity, and a high dose of sarcasm. Oh, and there is a lot of appletini and beer drinking.
May not be appropriate for readers under 18 years old. Not intended for prudes and killjoys with no sense of humor***

I don’t know how long I stand in the shower. Hot water burns my skin, evoking red splotches all over me. But I welcome the sensation, because it lets me concentrate on something other than Faith’s death. I put my palms on the wall and hang my head down under the water. I watch the water run down the drain by my feet. Someone pounds on the door again, but I ignore it. Maybe the same girl as before? Or maybe another girl. I don’t care, because the only girl that I want to see now is dead.

What doesn’t kill you makes you stronger. This is such bullshit. If something is about to kill you, it will scar you for life. There is no strength coming from terrifying experiences. Maybe that saying should be more specific and read something like What seriously kicks your ass makes you stronger. Yeah, that makes more sense.

Colin wraps his arm around my waist, and we walk to the bar, where three twenty-something, shirtless, attractive bartenders put on a real performance. Seriously, it should be forbidden to be as hot as these guys are. They are causing something close to a mass hysteria among the females clustered around the bar.

While two of the bartenders wait on the customers, the third one impressively juggles four shot glasses up in the air. He finally puts them down, swiftly jumps on the bar, and falls onto his knees in front of a group of tipsy, screaming girls who still look like teenagers.

He sits back on his heels and grins at the girls. His distressed jeans tightly hug his strong legs, and his muscular, naked torso and well-defined arms make me want to join the wild females. I quickly snatch a glance at Colin, but he doesn’t seem to mind me drooling. Or at least he’s smarter than showing any signs of jealousy over this.

One of the women leans forward and tries to kiss the bartender’s washboard stomach, but he stops her, laughing. Another bartender hands him a bottle of Frangelico and a tiny glass. The guy on the counter makes a production of pouring the liquor into the glass, while slowly and seductively swinging his hips to the music. The women are going wild. By now there is a big crowd of them, trying to squeeze in closer. The bartender chooses one girl, leans forward and whispers something to her. She nods, and opens her mouth. He touches the glass to her lips and pours the Frangelico into her mouth.

Her friends cheer and demand the same treatment. They stick money behind the bartender’s jeans waistband, as if he is a stripper. Well, he acts like one. Soon he collects an impressive amount of bills. I see mostly tens and twenties. He jumps off the bar and switches places with one of his co-workers—a gorgeous African American guy with dreadlocks. The women hoot and clap in delight.

Before I even open my eyes again, I feel a certain change around me. It startles me. I look up and see the Black Leather dude standing in front of me, hands in his jacket pocket, feet wide apart. I instinctively look around before snarling at him, “Hey, what’s your problem?”

I start to stand up, but he pushes me down. I hit my head on the building wall and shriek, “Fuck off! Help! Somebody, anybody! Help me!” I swat at his arm and kick him hard in the shin. I kick again, but he side steps. I make sure he can’t get close to me again. I have strong legs that can do a lot of damage when needed.

There are two couples at the end of the street, about twenty yards away. They turn, and I see the guys running toward us, the girls following behind.

“Tell that fucking boyfriend of yours that Razor is back,” the Black Leather hisses through his clenched teeth. His hands are curled into tight fists. There are letters and symbols on each knuckle. “This is just the beginning. He will pay for what he did to her.”

My voice gets stuck in my throat.  He did to whom? Her? Who? Colin? To whom? But my brain must be working overtime, because I lift my hand that clutches my cell phone and snap the picture of his snarling face. He swears and tries to grab the phone, but I kick again, and the guys who heard me yell for help are getting close, shouting, “Hey, what’s going on?” They are only a few feet away.

Colin enters my bathroom and leans against the door jam with his shoulder, ankles crossed, hands in his pants pockets. I meet his eyes in the mirror. There is an unmistakable pure appreciation in his eyes for what he sees. One corner of his mouth lifts up just a notch, and he tilts his head to the side. His gaze travels up and down my body, and my heart skips a beat. Or more like five.

Slowly, he brings his hand to his mouth and absentmindedly traces his lower lip with his thumb. Such a small gesture, and I start to melt inside. My boyfriend is a sexy beast without even trying to be. Colin pushes himself off the doorframe and, biting his lip, unhurriedly moves closer. He stands behind me and wraps his arms around me, bending down to press light kisses to the back of my neck.

I take a sharp breath and feel that familiar slow, lazy heat starting to spread from my chest all the way down to my sex. “You’re going to mess up my hair,” I whisper feebly.

“I’m afraid so,” he whispers back. His lips burn a trail over my shoulder. He cups my breasts and pinches my nipples through the thin fabric of my dress and bra.

I moan and close my eyes. Screw the hair. I press my back against his growing erection and I know where we are heading.
It feels so natural, so right. Colin and I belong together, no matter what demons from the past we are battling. I turn around and look at him, my palms over his chiseled chest. He is so beautiful, with his dreamy eyes, sparkling with anticipation. He leans in, and our lips crush.

A hurricane of our sexual energy is unleashed. We are all lips, and hands, and tongues, and impatient, short breaths. My dress flies off me, and the hairpins slide out of my hair. Colin’s fingers loosen down what’s left of my bun, and I feel my hair tumble down to my back and shoulders. He lifts me up and sits me on the bathroom counter. His lips are on my nipple, and I feel his teeth grazing it through the thin fabric of my lace bra. The sensation is exquisite. It forces any thoughts out of my brain, except for one: I want this man so badly; right now; right here
---- 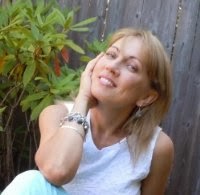 Angela Orlowski-Peart is the author of the Young Adult and New Adult fiction novels, including YA paranormal/urban fantasy romantic thriller series, Forged. Angela writes in multiple YA and NA genres, including paranormal, fantasy, urban fantasy, contemporary, sci-fi, and short stories.

She was born and raised in Poland. She now lives in the Seattle area with her family and a chronically curious cat.

Angela describes herself as European born, American by choice.

Posted by Margay Leah Justice at 8:45 AM