How to Land the Hot Guy 1.0
A multimillionaire by the age of 27, app developer Evie James is clueless when it comes to hooking up. So she does what any self-respecting geek-girl looking to get laid would do: she programs her own app for landing a hot guy. After a few failed attempts at making contact, beta testing leads her to Caleb Anderson.
Caleb is used to female attention, but finds himself attracted to Evie because of her unique brand of awkward. A master of one-night stands, he's more than happy to show her what she's been missing in the bedroom. But he quickly discovers that one night with a woman like Evie will never be enough for him….

This was a quick, fun read that actually had more substance to it than I thought it would. The reasoning behind Caleb's playboy ways is actually kind of heartbreaking and it's really kind of nice to see him work through it and discover what really matters to him. He is a swoon-worthy hero and just one of the reasons to read this book. The other is Evie - oh, my gosh, is she awkward in the beginning! It's actually kind of funny to read about their first encounter, but nice to see how she grows and develops into the woman she always wanted to be over the course of this short book. Well worth the read. 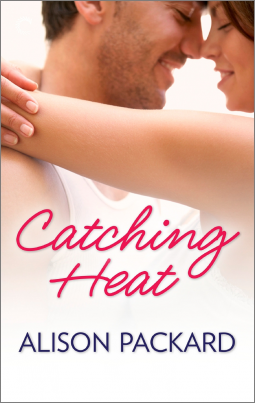 Life has taught Angie DeMarco that all baseball players are womanizers, and her incredible one-night stand with sexy San Francisco Blaze back-up catcher J.T. Sawyer seemed to prove it. Determined not to give in to their sizzling chemistry a second time, she's kept her distance ever since, focusing on her accounting job with the team. But now she's laid off…and pregnant.
J.T. was hurt by Angie's rejection, but with one more year with the Blaze, he has no time for love. He needs to spend the off season training hard so he can negotiate a better contract with a new team at the end of the year. But when Angie shows up on his doorstep, he's overwhelmed by wanting to not just do right by her but pursue a relationship with her. Hoping for a second chance, he proposes.
Angie agrees to marry J.T. on one condition: the marriage will be purely a business arrangement. But as Angie spends time with him and his family, and J.T. neglects his training to spend time with her, what begins as a union in name only slowly grows into something more—something that looks a whole lot like love and friendship.

This was a pretty standard sports-themed love story, nothing to really set it apart from the rest. Angie was kind of a difficult character to like, so I never really bonded with her. Consequently., I never really cared if she got her happy ending or not. On the other hand, J.T. was to die for and I just loved him and his family - they were what made this book worth reading. Another character I didn't care much for was Angie's mother, who was just a horrible, bitter woman who nearly ruined her daughter's chance at happiness and a good life with her resentment. Out of the whole book, though, I really want to read more about J.T.'s undercover brother, Justin. He was probably the most intriguing character in the whole book.
Posted by Margay Leah Justice at 9:59 AM