M9B Friday Reveal and Giveaway: ALA feature on Scott Craven and Donna Galanti

Welcome to this week’s M9B Friday Reveal!
This week, we are featuring
Scott Craven and Donna Galanti
who will be appearing and signing at ALA!

Be sure to enter the giveaway found at the end of the post!

Stay away from the window, don’t go outside when it’s storming and whatever you do, do not touch the orb.
Twelve-year-old Joshua Cooper’s grandpa has always warned him about the dangers of lightning. But Joshua never put much stock in his grandpa’s rumblings as anything more than the ravings of an old man with a vast imagination. Then one night, when Joshua and his best friend are home alone during a frightful storm, Joshua learns his grandpa was right. A bolt of lightning strikes his house and whisks away his best friend—possibly forever.
To get him back, Joshua must travel the Lightning Road to a dark place that steals children for energy. But getting back home and saving his friend won’t be easy, as Joshua must face the terrifying Child Collector and fend off ferocious and unnatural beasts intent on destroying him.
In this world, Joshua possesses powers he never knew he had, and soon, Joshua’s mission becomes more than a search for his friend. He means to send all the stolen children home—and doing so becomes the battle of his life.

Donna is the author of the Joshua and The Lightning Road series and the Element Trilogy. She is a contributing editor to International Thriller Writers the Big Thrill magazine and blogs at www.project-middle-grade-mayhem.blogs..., a cooperative of published middle grade authors. Visit her at www.donnagalanti.com and www.ElementTrilogy.com. Donna wanted to be a writer ever since she wrote a murder mystery screenplay at seven and acted it out with the neighborhood kids. She attended an English school housed in a magical castle, where her wild imagination was held back only by her itchy uniform (bowler hat and tie included!). There she fell in love with the worlds of C.S. Lewis and Roald Dahl, and wrote her first fantasy about Dodo birds, wizards, and a flying ship (and has been writing fantasy ever since). She’s lived in other exotic locations, including her family-owned campground in New Hampshire and in Hawaii where she served as a U.S. Navy photographer. She now lives with her family and two crazy cats in an old farmhouse and dreams of returning one day to a castle. 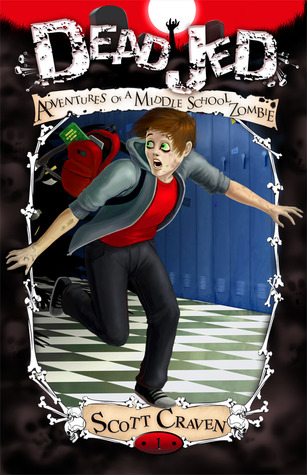 Dead Jed is Shaun of the Dead meets Diary of a Wimpy Kid. Jed's not your typical junior high geek. He is, to use the politically-correct term, cardiovascularly-challenged. And while his parents have attempted to shield him from the implications of being 'different' for as long as they could (Jed was 8 and at a friend's sister's birthday party when he blew his lips off onto the cake in front of everyone, finally prompting the “Big Talk” from his parents and an emergency SuperGlue repair by his dad), 7th grade at Pine Hollow Middle School as a target of Robbie the supreme school bully and his pack of moronic toadies is rapidly becoming unbearable.
From being stuffed in a filled trash can as “dead meat” and into a trophy case as the bully's “prize,” to literally having his hand pulled off in the boys' room (Jed's always losing body parts. Luckily, a good stapler and some duct tape and he's back in the action) and a cigarette put in it and try to frame him for the recent reports of smoking in the school, Jed's had enough and is ready to plan his revenge. Besides, it's awesome what you can do when you're already dead! 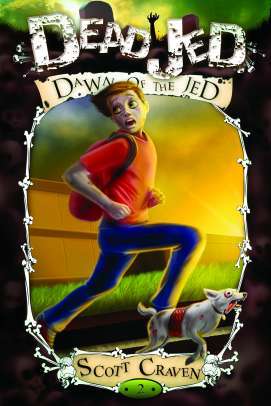 The first part of seventh grade was rough on Jed, but things are looking up now that Christmas is almost here. As with past Christmases, Jed asks for the one thing he's always wanted--a dog--and again, his parents tell him they're not ready. But fate has a different plan when Jed sees a dog get run over by a car. Then, it happens. Jed suddenly has a pet, Tread, a zombie dog bearing his namesake--a tire tread down his back. Jed may have gained a dog, but he loses his best friend Luke, who fears the way Jed created his undead pet.

When Jed returns to school, he finds a mysterious group called the No Zombies Now Network spreading rumors of the dangers the undead pose to normal people. Forced to disprove Hollywood stereotypes, Jed has his work cut out for him as stories of a zombie dog begin to circulate. Jed could be expelled if he can't expose the NZN Network as a fraud. Jed needs help from his kind of girlfriend Anna, especially after he discovers Luke has joined the shadowy group.

Once again navigating the treacherous waters of middle school, Jed does his best to stay in one piece. Only this time he'll need even more duct tape and staples than usual.

Proud graduate of Cal Poly, San Luis Obispo, have one son who will turn 18 in March 2013, now a features writer for The Arizona Republic.

Posted by Margay Leah Justice at 10:00 AM