PATH OF DESTRUCTION will be here soon! Check out the first book STORM WARNING for FREE from December 5-9! 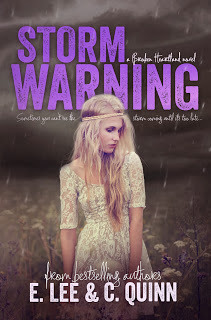 Severe Storm Warning Tip #2:
If you see approaching storms or any of the danger signs, be prepared to take shelter immediately.

Severe Storm Warning Tip #3:
They may strike quickly, with little or no warning.

Situated just outside of Oklahoma City, Calumet County is divided into two drastically different communities: Hope’s Grove and Summit Bluffs. One is the small backward town where dirt roads lead the way to field parties and railroad tracks. And the other, a sprawling suburb where paved drives lead to the landscaped lawns of the wealthy and over privileged.

For five teenagers smack in the middle of Tornado Alley, summer is heating up fast. The winds of change are blurring the invisible line that divides the rich and the rural.

One has a secret.
One has a crush.
One has been lying.
One will get caught.
And one might not make it out alive.

They’re from two different worlds…but one summer is about to change everything.


Series info:
Whether you believe in destiny, divine intervention, or just plain ol' dumb luck, several things happened in 2013 that caused E. Lee and C. Quinn's paths to cross. It may have been that the stars aligned perfectly, or the fact anytime Luke Bryan was mentioned on a social media site both of them were tagged, or maybe it was just that their small town roots and country girl attitudes were magnetically drawn together—calling out to one another, “Y'all should write a book!” Despite geography keeping them apart—Lee in Illinois and Quinn in Alabama—they did. Thanks to three-hour phone calls, ridiculous amounts of online chats, and umpteen Google Docs—Storm Warning is the first book in their edgy new Young Adult series, Broken Heartland.
Website | Twitter | Facebook | Pinterest

Born and raised in the middle of a Midwestern cornfield (not literally, that would be weird), I’ve spent my entire life imagining stories. Stories where the right guy always gets the right girl, first kisses are as magical as they are on the big screen and anything is completely possible if you believe.

Although this journey began years ago, it recently took on a whole new life. After years of devouring hundreds of Romance, YA and New Adult novels, I had an epiphany... I should write a book. And I did it!

If I’m not reading, writing, enjoying drinks with my amazing group of girlfriends or chasing around a sarcastically funny kid, I’m probably watching television shows that were created for teenagers, while my husband teases that I’m too old to watch them.

Caisey Quinn lives in Birmingham, Alabama with her husband, daughter, and other assorted animals. She is the bestselling author of the Kylie Ryans series as well as several New Adult Romance novels featuring country girls finding love in unexpected places. You can find her online at www.caiseyquinnwrites.com .