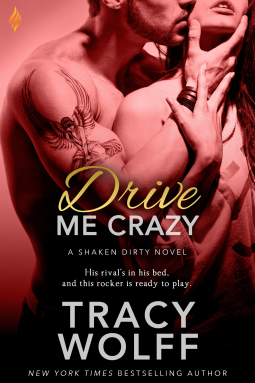 His rival’s in his bed, and this rocker is ready to play. Former rivals Quinn Bradford and Elise McKinney are not friends, at least not anymore. As teens, all they cared about was psyching each other out before concerts. But when Quinn—now the keyboardist for Shaken Dirty, the hottest rock band on the scene—returns to his hometown and hears about the car accident that shattered Elise’s career, he’s determined to make things right. Elise wants nothing to do with an arrogant rock star, despite how bad she so clearly wants him, so Quinn kidnaps the stubborn little piano player and whisks her back to his mansion. A little seduction might be just the thing to keep Elise under his care…and in his bed. But amid pranks both childish and very adult, their past comes rearing back to haunt them. And it might be more than either of them can forget.
(From NetGalley)

I have to say this is one of my favorite series. I loved the first book in the series and the second one doesn't disappoint. It was amazing! Let's start with Quinn - oh, how I love Quinn! He has a style all his own and he just revels in his bad boy rep so much, you can't help but to revel right along with him. He just has a way of embracing life that is contagious and he likes to share it - and himself - with everyone. So when he comes to Elise's rescue, offering to take care of her in a way no one else would, you can't help but to fall a little in love with the guy. He is so good to her and he puts up with a lot, but he's no doormat - he dishes out a lot, too. And then there's Elise. Poor thing, she's had it rough and her future is so uncertain, you just can't help but to bleed for her a little. The things she has to face are horrible and you'll be so glad she has someone like Quinn to be there for her and help her through it. Separately, these two are quite strong-willed and somewhat larger-than-life, but together - they're a force to be reckoned with.

I just loved this story and would recommend it to anyone who enjoys a little bad boy with their rockstars or vice versa! It's fun, it's sexy, and it's one I'll remember for a long time to come.
Posted by Margay Leah Justice at 2:17 PM