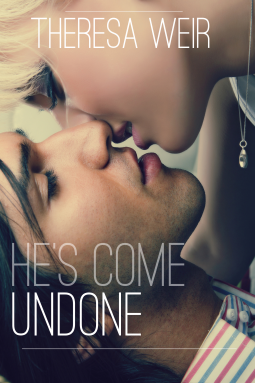 From Theresa Weir—Bestselling New York Times and USA Today RITA Award Author
He's Come Undone
Penniless and behind on rent, college student and once famous child actress Ellie Barlow takes on the role of a lifetime when she's hired by a group of young women to break the heart of the campus player who cruelly dumped them.
Transformed from slob slacker to jaw-dropping beauty, Ellie is dressed, styled, bleached and waxed, her chunky glasses exchanged for violet contacts. Along with physical prepping, she's coached on Julian's obsessions, which include long-distance running, Doctor Who, and J.D. Salinger.
In no time, Julian is in pursuit of his custom-made next victim, but when Ellie goes off script and begins to fall for her target the newest broken heart in this risky game could be her own.
************************
What readers are saying about He's Come Undone:
"Theresa Weir is a master when it comes to tugging at my heartstrings."
"Julian Dye is my new book boyfriend."
"A hot and deeply emotional read."
***********************
About the author:
Theresa Weir (a.k.a. Anne Frasier) is a New York Times and USA Today bestselling author of twenty-five books and numerous short stories that have spanned the genres of suspense, mystery, thriller, romantic suspense, paranormal, fantasy, and memoir. During her award-winning career, she's written for Penguin Putnam, Simon & Schuster, HarperCollins Publishers, Bantam Books/Random House, Silhouette Books, Grand Central Publishing/Hachette, and Thomas & Mercer. Her titles have been printed in both hardcover and paperback and translated into twenty languages.
Her memoir, THE ORCHARD, was a 2011 Oprah Magazine Fall Pick, Number Two on the Indie Next list, a featured B+ review in Entertainment Weekly, and a Librarians’ Best Books of 2011. Weir’s debut title was the cult phenomenon AMAZON LILY, initially published by Pocket Books and later reissued by Bantam Books. Writing as Theresa Weir, she won a RITA for romantic suspense (COOL SHADE), and a year later the Daphne du Maurier for paranormal romance (BAD KARMA).