Cover Reveal and Giveaway: THIS CRUMBLING PAGEANT by Patricia Burroughs 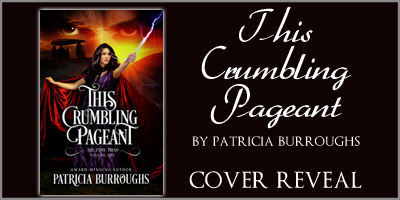 I'm excited to share the cover for THIS CRUMBLING PAGEANT, which is Volume One in the Fury Triad series by Patricia Burroughs. This is Epic Fantasy with romance and ya crossover appeal. The book is scheduled to release May 6, 2014 in Hardcover, Trade and Digital by Story Spring Publishing, LLC

About the Book:
Persephone Fury is the Dark daughter, the one they hide.

England, 1811. Few are aware of a hidden magical England, a people not ruled by poor mad George, but the dying King Pellinore of the House of Pendragon.

The Furys are known for their music, their magic, and their historic role as kingmakers. When Fury ambitions demand a political marriage, Persephone is drugged and presented to Society--

But devious and ruthless, Persephone must defy ancient prophecy, embrace her Dark magic, and seize her own fate.

Be swept away into the first book of a dark fantasy series combining swashbuckling adventure, heart-pounding romance, and plot-twisting suspense. 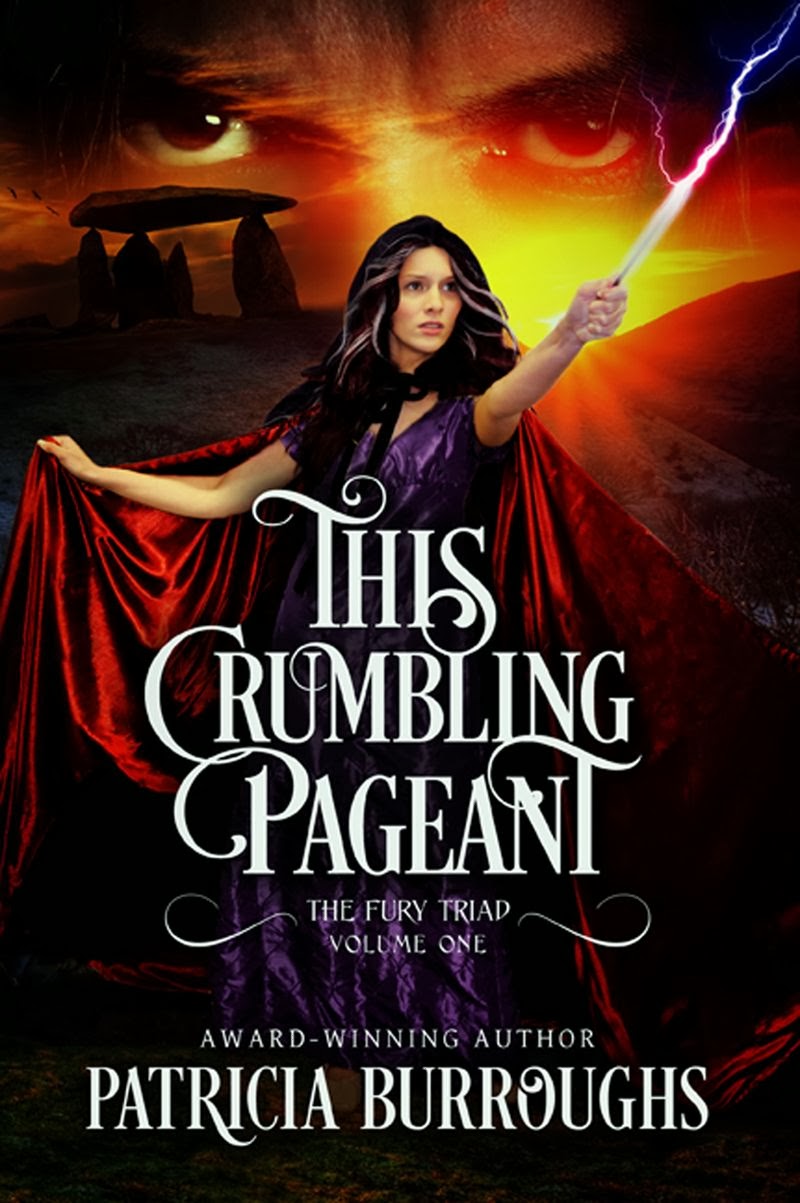 
[Persephone Fury is the dark daughter, the one they hide from Society. But one night she is abducted and taken away to the most dangerous parts of London. Fierce and clever, she is able to rescue herself, only to collapse before she gets home. Fortunately for her, Sir Robin Fitzwilliam finds her. Even more fortunately for her family’s reputation, he believes her to be the young boy she’s masquerading as.]

Why would a child be out alone in the middle of the night?
Robin slid the slender youth’s body from the expensive saddle and staggered backward, not from the weight, for in truth, the boy weighed little, but from the reek of Shadows.
It was a miracle the gelding hadn’t tossed the stripling to rid himself of the Darkness on its back.
He eased the boy onto the ground.  The boy’s body was limp and his skin was hot and damp with sweat. Robin fumbled with the boy’s heavy jacket and grabbed the lapels to yank it open.
Thin fingers closed around his wrists. With a snarl, the boy heaved himself up and delivered a smart punch to Robin’s jaw, knocking him back on his heels in shock.
“Don’t touch me!” the boy rasped fiercely.
“You’re overheated. Let’s get that coat off—”
Two sharp-knuckled fists smacked into him at the same time, leaving both his cheeks stinging.
“Keep your hands off my coat!” The boy scrambled to his feet and leapt against the horse, attempting to mount.
“Gods damn it,” Robin spat, “you’re drowning in Shadows, boy, we need to—”
A foot caught him in the chest and he staggered back, then hurled himself forward, grabbed the boy by the collar, and yanked.
They both fell tumbling into the dirt. “You’d best pray it’s the Darkness that has driven you mad, boy, because if it’s not, you’ll pay for these bruises with some of your own!” He pinned the boy to the ground with one hand braced on a shoulder and continued, “I’m not going to hurt you. Just calm down and let’s see if we can relieve you.”
The boy relaxed, calming except for his heaving chest as he fought for air.
Robin’s mind raced through his options, coming up blank.
“Cat-mint...” the boy muttered. “Tincture of angelica. Blue chalcedony, jet, bronzite, amber—do you have any on you?”
“No,” Robin said, surprised.
The boy moaned. “Trifolium, then...” The boy’s head fell back into the dirt.
“Trifolium. I don’t know.”
“Clover,” the boy ordered, scorn dripping from his voice. “I’m speaking of clover.”
Robin paced along the road looking for a clump of clover, unsure whether to laugh or snarl.
“Do you at least know your Greek sigils?” the boy muttered weakly. “The banishing sigil performed with clover...”
“I know sigils,” Robin said, amending silently, if I can remember the Greek ones from the schoolroom. If he got the scamp past this spell of poisoning, he was going to thrash him.
“How long has it been since you were cleansed?”
Impertinent little brat. “My soul is not overburdened.”
“You evaded my question, which is answer enough, may the gods deliver me,” the boy retorted with equal venom.
At the moment, Robin just needed to come up with an acceptable prayer. He held his hands over the boy’s body and called, “Away, away, from your feet and from all your limbs... erm... Shadows and every muscular pain!” he finished with a wince.
“Did you just use the prayer to rid me of gout?” the boy asked incredulously.
“I said Shadows,” Robin muttered.
The boy let out a disgusted sigh. “I’m doomed.”

About the Author:
Award-winning screenwriter and best selling novelist Patricia Burroughs loves dogs, books, movies, and football. A lifelong Anglophile, she treasures her frequent travels in the British Isles researching The Fury Triad, the epic fantasy that has taken over her life and heart. She and her high school sweetheart husband are living happily ever after in their hometown of Dallas, Texas.

Giveaway:
Autographed Paperback ARC of  This Crumbling Pageant.
Open Worldwide!
a Rafflecopter giveaway
Posted by Margay Leah Justice at 9:42 AM