Cover Reveal: Out of the Ashes (The Ashes Series #1) by Diana Gardin 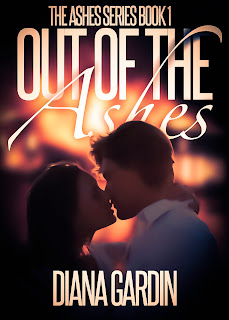 Synopsis
Out of the frying pan and into the fire…
Paige Hill is discovering who she is again after losing everything she loves in a tragic fire. She’s endured a long road to recovery with the help of her best fiend Gillian and is finally beginning her life again: college, a job, and a blossoming love she never even saw coming.
Clay Forbes is the notorious campus playboy. He’s a star athlete, a senior architecture major, and the only son in a family with power and money back in his hometown. When he crashes into Paige, his whole perspective on life shifts, and his world as he knew it becomes nonexistent. He’s wrapped up in her.
They’re both learning how to love, but Clay’s ex-girlfriend Hannah won’t make it easy for them. She puts a target on Paige’s back, and won’t stop until she’s derailed their budding romance once and for all. Who will be left standing after the ashes settle for the second time?

I'm a wife of one and a mom of two. Writing is my second full time job to that, and I love it! I write Contemporary Romance in the Young Adult and New Adult categories. I'm also a former Elementary school teacher. I love steak, sugar cookies, and Coke and I hate working out. Look for more Contemporary Romance Titles from me soon, including Out of the Ashes (Ashes 1) and Wanted (Nelson Island 1).

Posted by Margay Leah Justice at 7:27 AM

Email ThisBlogThis!Share to TwitterShare to FacebookShare to Pinterest
Labels: cover reveal, Diana Gardin, Out of the Ashes (The Ashes Series #1), Xpresso Book Tours