Cover Reveal and Giveaway: Journey to Landaran by Judy Goodwin 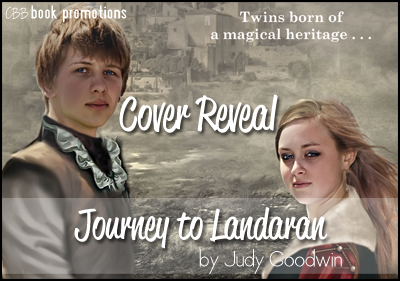 I'm excited to reveal the cover for the YA Fantasy, Journey to Landaran by Judy Goodwin.  This book is scheduled to release February 1st, 2014.

This stunning cover was designed by  Katt Amaral. 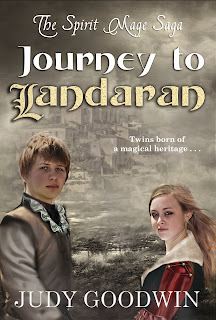 Aidah and her twin brother Tavish have always had a knack for getting into trouble. From pie stealing and pranks to hunting for magical creatures, they have always escaped notice in their tiny mountain village.
Until now.
Aidah begins seeing visions through her brother’s eyes. He’s a Firestarter, gifted with the Talent to control light and heat, destined to become a Sun Mage in the great city of Landaran. But he doesn’t want to leave without his sister. As storm clouds gather, Aidah dreams of a beautiful man, a frightening man, calling to her.
She fears the truth. That she may developing a Talent of her own, one that will change their lives forever.
The power to read minds. To possess bodies. To travel inside dreams. In the world of Ernid, Spirit is the ultimate power.
Nations will go to war over them.

Add it to your Goodreads shelf!

Excerpt:
Aidah's movement was too sudden. The branch she stood on snapped, and she fell back, tumbling down the nest towards the brink of the ledge. Tavish reached out and caught hold of her tunic as her legs slipped over the edge.
“Grab my arm! Pull yourself up,” he commanded as the fabric in his hand began to tear.
She tried to grab for his arm, but her body was turned awkwardly. At least her predicament seemed to have one benefit. The roc, startled by her fall, wheeled away.
Aidah didn’t have time to see if there were any other flying creatures down there, such as a few frightened wyrret parents. The tunic tore. Aidah scrambled to get hold of something, anything,. She felt herself falling, and then Tavish’s fingers clamped hard around her wrist, his short nails pinching into her skin.
“Sis, don’t move. I’m not secure here. Just stay still and let me pull you up.” She looked up at her brother holding her with one hand, trying to get a foothold or any kind of handhold on the cliff to brace himself in order to pull her back up. The fact she was looking up at him alarmed her--she was truly hanging off the cliff, her shoulders rubbing the hard granite of the edge, her lower body dangling.
Tavish found a rock to hold onto and pulled, but while the cords in his neck jutted out and his arm trembled with effort, he couldn’t pull her up even a little before his feet began to slip. She very carefully grasped his arm with her other hand, but still he was not quite strong or secure enough. Aidah’s heart pounded through her rib cage, as fear began to sink in. If she fell, it would be a messy death. Death wasn’t something she ever really thought about, yet here it suddenly was, glaring at her. The two of them struggled, trying to get her up, but it was useless. She swallowed back a moan as tears burned in her eyes.
“Gods, if I knew a spell to fix this!” Tavish gasped.
His words seemed to trigger something within her. Strength, that was what he needed. If only she could somehow lend him strength . . .
A blinding pain tore at the base of her skull, and she could suddenly hear Tavish muttering to himself, although his lips were firmly pressed shut. She didn’t have time to listen to what he was saying, however, before a pressure wave suddenly went through her body, traveling from the soles of her feet up through her torso and out through her hands where she gripped Tavish’s arm. As the wave passed, strength left her, darkening her vision. She opened her mouth to scream, thinking perhaps she was dying.
With a cry, Tavish pulled hard at her, and she found herself on the cliff again, in Tavish’s arms lying at the very back of the ledge. Apparently he had pulled so hard he’d sent both of them back several paces. Even now he looked ready to do it again--there was no trace fatigue. She, on the other hand, felt pale and sickly. The world spun, and she was afraid her knees wouldn’t hold her up. Trembling, she tried to get up and failed, falling back against her brother.
He set her down and got up, brushing snow and dirt from his trousers. “Wow, where did that come from, I wonder? I feel like a fresh ox! I think I could move a mountain right now! Did you do something, Sis?” He paced around stretching out his arms and legs, as if unable to stand still.
The world was graying out to Aidah and she found it difficult to follow what Tavish was saying. Her head was pounding with one of the worst headaches she’d ever had. “I don’t . . . think so. Maybe your magic helped you. Can we go home? I’m not feeling so well . . .” The world suddenly tilted and fell into blackness. 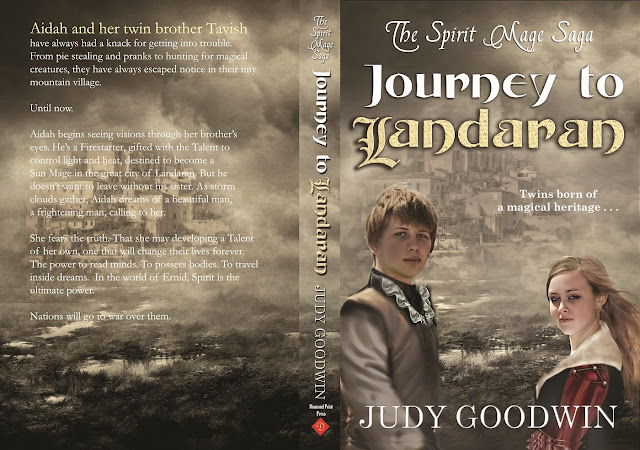 About the Author:
Judy Goodwin developed a passion for writing at a young age, creating picture books from the time she 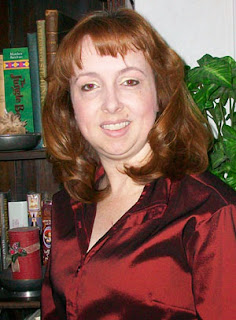 could read and write. She continued this passion throughout her schooling, earning her BA degree in Creative Writing from the University of Arizona. In her day job, she works as a technical writer in the healthcare field. She enjoys sharing her love of books and fantasy with her daughter and partner. They live in Gilbert, Arizona, with two Shiba Inu (Japanese) dogs, one wiener dog, and four black cats.
Ms. Goodwin has published short stories in small press and online magazines including Space and Time, Dreams and Nightmares, Alienskin, and Beyond Centauri. With the advent of eBooks and indie publishing, she decided to move into the brave new world of publishing with the debut of her first novel, Heart of the Witch.
Journey to Landaran is her second full length novel, the first installment of the Spirit Mage Saga.

a Rafflecopter giveaway
Posted by Margay Leah Justice at 9:06 AM