Interview #1
A little about Cambria
I love coffee. I have two kids and two dogs, and 2 cats. I am married to a US Marine. I have an irrational fear of chickens (they are creepy!), I love the rain and fall is my favorite season.

Did you learn anything from writing your book and what was it?
I’ve learned through writing that I am a lot stronger than I ever thought and that I am way more stubborn than even I realized (trust me I am super stubborn).
Do you have any advice for other writers?
Keep writing. Don’t stop. Be prepared for a long and sometimes hard road to publication. It’s a touch business but you can do it. Anyone can do it if you really want it.
What inspired you to write your first book?
This is such a hard question. LOL. You think it would be easy. Honestly, I just got this character – this person stuck in my head. I started dreaming about him. One day I decided to write down what I kept thinking. It grew into a book and I have been writing every since.

Tell us your latest news?
I recently joined the circus! Okay I didn’t. But, I am allergic to elephants. That’s not recent but it’s true. My latest news is that TEXT is released!!! I am so incredibly excited about this book. I think it’s my favorite book of mine in the Take It Off series. I also have another book coming out in early December called TIPSY!

What TV shows/films do you enjoy watching?
My favorite shows are The Originals, The Vampire Diaries and Teen Wolf. I also really like Melissa & Joey – it’s funny.

Get to know the author

Readers have a great privilege of stepping directly into an author’s mind. They have in front of them in black and white what someone else was thinking and feeling as they were writing. It’s actually pretty personal.
But  even though you read the thoughts that swirl through an author’s mind doesn’t mean you really know them, because the thoughts and feelings they write are usually a character’s.
I think sometime’s reader’s wonder about the person behind the book. The author.
So in today’s post I am going to tell you 10 things about me that you don’t know. 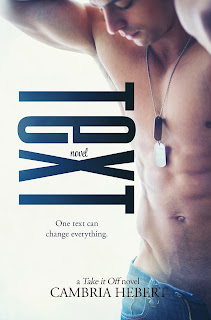 All I heard was his breathing. The pounding of my heart. I felt the rush of blood draining to my head and the sharp stab of pain every time his shoulder gouged into my stomach. I don’t know how long he walked. I don’t know how long I’d been gone, how long I’d been passed out. The sun was higher in the sky, which told me it must have been a while.
We could be anywhere.
His steps slowed, and my entire body stiffened.
Was this it?
Were these the last moments of my life?
I noticed something then… the bulge in the back pocket of his jeans. The top of a cell phone peaked out, tempting me.
He stopped walking altogether. Silence rained upon us. Not even a bird dared make a noise. I was presented with a choice. This entire day had been nothing but a series of choices, of attempts at gaining freedom.
I lurched my body to the right, rolling off his shoulder and down his arm. He swore and threw me back up. I made an intense gagging sound, not all of it made up (his shoulder really hurt my gut). He leaned forward like he was trying to get away from a shower of puke, and my body went with him.
I flailed my arms about like I needed help, quickly making my move. Then I gagged again.
He made a disgusted sound and pulled me off him, pushed me away, and held me out. Our eyes met one final time.
And then he let go.
I braced myself for the brunt of the hard ground. Only it didn’t come. My body was forced into a free-fall.
I dropped from the air, the bottom falling out of my stomach as my arms and legs searched for something—anything—to catch myself with.
But there was nothing.
The longer I fell, the darker it became. Until the sunlight was just a beacon above.
And then I hit.
My teeth banged together, biting into my tongue and filling my mouth with the tang of blood. I blinked, trying to rid my head of the throbbing, but it didn’t help. I looked up… up past the tall dirt walls of my prison, up to the tiny round hole at the top.
My captor stood there staring down, watching me, not saying a word.
I lay there unmoving, feeling the damp, cold dirt at my back and against my legs. I lay there and stared at him, hoping he would think I was dead, that the fall broke my neck.
He stood there a long time.
Staring.
Watching.
Waiting.
And then he stepped away, disappearing from sight, leaving nothing above me but the image of trees and sunlight.
I lay there a little bit longer, wondering if he would come back.
When I thought it was safe, I began to wiggle my prize out of the sleeve of my running jacket, jiggling it down into the palm of my hand.
A shadow fell overhead, and I stopped breathing.
He returned.
He stared at me some more. I lay there still unmoving, gripping my lifeline in my hand. Finally, he grunted. And he said three words that scared me more than death itself.
“I’ll be back.”


Hey everyone!
As part of  Text’s release day I thought I would share with you a little something about the main character, Nathan.
A few fun facts about Nathan:
Nathan is a United States Marine.
Nathan works out a lot. He’s hot.
Guns are his hobby and his job.
He loves apple pie.
Like the man is serious about his pie. He loves it. In fact, when I was writing Text I baked pies a lot. Ha ha ha. My family really enjoyed it.
So today I brought along my recipe for Apple Pie. I’m calling it Nathan’s apple pie in honor of my main man in Text.
It’s the perfect time of year to bake, eat and enjoy!!

Ingredients
You can use store-bought crust or you can make your own.
To make a double pie crust:
2 2/3 cups all-purpose flour
1 teaspoon salt
½ cup butter
½ cup shortening
6 tablespoons ice-cold water

Directions
To make crust:
Cut together the flour, salt, butter, and shortening with a pastry fork until blended. Add water one Tbsp at a time and mix with fork until it firms into a ball. Separate the ball into two smaller balls. Roll each out onto a heavily floured surface, flipping over frequently. Place one crust in the bottom of a pie pan and reserve the other crust for topping the pie once it is full.
To make filling:
Peel and slice all the apples. Add all slices into a bowl. Mix the apples with the sugar, cinnamon, and flour until well coated. Dump apples into pie crust. Place the 4 tablespoons of cut-up butter around on top of the apples.
Cover the pie with the remaining crust. Crimp the edges together. With a sharp knife, cut a few slits in the top crust (to allow steam to escape while baking), and then you can brush the top of the pie with an egg wash (egg wash = a beaten raw egg). This will give the crust its golden-brown appearance. Also, sprinkle granulated sugar over the top of the crust—which will give the pie a nice flavor and sweetness.
Bake the pie in an oven preheated to 400 degrees for 40-50 minutes, depending on oven.
Let cool and enjoy!


Thanks for celebrating the release of TEXT with me!

One text can change everything.

Honor Calhoun never thought her life would ever be like the books she writes for a living. One morning while out for a run, she learns not all bad things are plots in novels. Some horrors can actually come true.

She faces off with a persistent attacker, holds her own, but in the end is taken hostage and thrown into a hole. In the middle of the woods.

But Honor didn’t go down there alone.

She took her kidnapper’s phone with her. With a spotty signal and a dying battery, her hope is slim.

Nathan Reed is an active duty Marine stationed at a small reserve base in Pennsylvania. All he wants is a calm and uneventful duty station where he can forget the memories of his time in a war-torn country.

But a single text changes everything.

Nathan becomes Honor’s only hope for survival, and he has to go against the clock, push aside his past, and take on a mission for a girl he’s never met.

Both of them want freedom… but they have to survive long enough to obtain it.

Direct buy links not yet available but will be found here come release day: 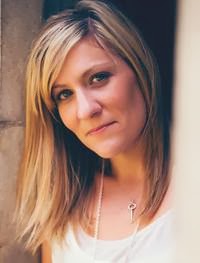 Cambria Hebert is the author of the young adult paranormal Heven and Hell series, the new adult Death Escorts series, and the new adult Take it Off series. She loves a caramel latte, hates math and is afraid of chickens (yes, chickens). She went to college for a bachelor’s degree, couldn’t pick a major, and ended up with a degree in cosmetology. So rest assured her characters will always have good hair. She currently lives in North Carolina with her husband and children (both human and furry) where she is plotting her next book. You can find out more about Cambria and her work by visiting http://www.cambriahebert.com 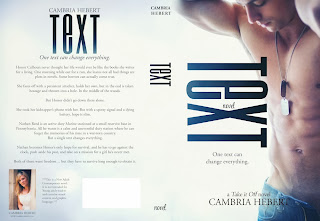 --A signed PB, a Necklace and a swag pack

(Note that this giveaway is set and managed by author, not Xpresso Book Tours)

a Rafflecopter giveaway
Posted by Margay Leah Justice at 7:49 AM