Release Blitz and Giveaway: The Wedding Pact by Katee Robert 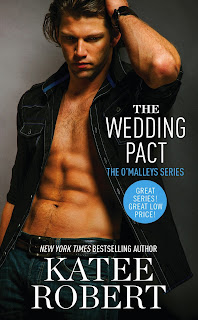 THE WEDDING PACT
by Katee Robert


Carrigan O'Malley has fallen in love with family enemy #1, James Halloran and he has absolutely no intention of letting her get away.  THE WEDDING PACT is the second book in a smoking-hot series about the O'Malleys—wealthy, powerful, and full of scandalous family secrets from New York Times Bestseller Katee Robert and Forever Romance.

Synopsis:
Carrigan O'Malley has always known her arranged marriage would be more about power and prestige than passion. But after one taste of the hard-bodied, whiskey-voiced James Halloran, she's ruined for anyone else. Too bad James and his family are enemy number 1.

Hallorans vs. O'Malleys—that's how it's always been. James should be thinking more about how to expand his family's empire instead of how silky Carrigan's skin is against his and how he can next get her into his bed. Those are dangerous thoughts. But not nearly as dangerous as he'll be if he can't get what he wants: Carrigan by his side for the rest of their lives.

Meet the O’Malley family in book one of the O’Malley series, The Marriage Contract:
Get More information at : Goodreads  | Amazon | Barnes & Noble | Kobo | iTunes

Coming in July 2016, An Indecent Proposal 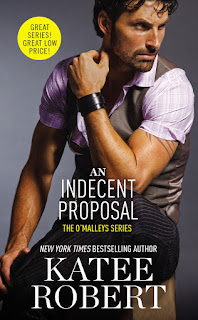 Get to know another O’Malley sibling- Cillian O’Malley
Greed. Ambition. Violence. Those are the "values" Olivia Rashidi learned from her Russian mob family-and the values she must leave behind for the sake of her daughter. When she meets Cillian O'Malley, she recognizes the red flag of his family name . . . yet she still can't stop herself from seeing the smoldering, tortured man. To save her family, Olivia sets out to discover Cillian's own secrets, but the real revelation is how fast-and how hard-she's falling for him.
Plagued by a violent past, Cillian is more vulnerable than anyone realizes. Anyone except Olivia, whose beauty, compassion, and pride have him at "hello," even if she's more inclined to say good-bye to an O'Malley. While his proposal of sex with no strings seems simple, what he feels for her isn't, especially after he learns that she belongs to a rival crime family. Cillian knows that there is no escape from the life, but Olivia may be worth trying-and dying-for . . .

Excerpt
She headed for her favorite booth, but drew up short when she saw that it was occupied. Her brain took precious seconds to catch up to her eyes. There he was, the asshole, sitting in her booth with his legs stretched out in front of him, wearing those jeans that hugged his ass and thighs and a smug smirk, with his arms stretched out across the back of the booth. Challenging her.
In case she missed all that written all over his face, there were two drinks in front of him—a beer and, if she didn’t miss her guess, a dirty martini. Her preferred drink. How the hell did he even know that?
Oh yes, this was a challenge all right.
Every intelligent cell in her brain demanded she turn around and walk away. Run away. But then the bastard raised an eyebrow, as if daring her to sit down and drink with him, and she threw common sense right out the window. Carrigan strode across the distance separating them, putting a little more swing into her step and smiling to herself when his gaze tracked the movement. Album or not, tangled history or no, he wanted her.
And she wasn’t above using that against him.
“Two nights in a row. I must have pissed off Lady Luck somehow.” She sank onto the cushioned seat across the small table from him. The bartender appeared half a second later, and Carrigan smiled sweetly at her. “A dirty martini, please.”
The woman looked at the table, looked back at her, and shrugged. “Sure thing.”
If anything James just seemed more amused. “Too good for my drinks?”
“I’m not stupid enough to take a drink I’ve left unattended…and I’ve never laid eyes on this one until I got here. Party Girl 101.”
“Now, lovely, why would I need to drug you? You came here of your own free will, just like I knew you would.” He leaned forward and propped his elbows on his knees, drawing her gaze to the way his black T-shirt clung to his shoulders and how his dangling hands seemed designed to frame the bulge between his legs.
Her body zinged to life in a way it hadn’t in months. It was all too easy to take a walk down memory lane and feel him lifting her against that wall and shoving his cock home, growling filthy words in her ear in that same tone of voice he was using now.
Shit.
She held his gaze even though all she wanted to do was look away. James wasn’t pretty. He was far too masculine for that. The first time she’d seen him, she thought he’d look perfectly at home on the back of a Harley, and that perception hadn’t changed with time. Everything about him screamed danger in a way she wasn’t used to. The men in her family were dangerous—there was no doubt of that—but it was a polished danger. James’s wasn’t. He was gritty and primal and…She really needed to stop. Right now. “I wouldn’t put anything past you at this point.”
“You wound me.”
“You kidnapped me. I’d say we’re nowhere near even.” Something she had to keep reminding herself, though the fact she kept forgetting annoyed the hell out of her. Only a weak woman would get all aflutter over a man who obviously meant her harm. A weak woman or one with a death wish.
Carrigan wasn’t either. 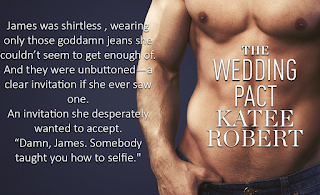 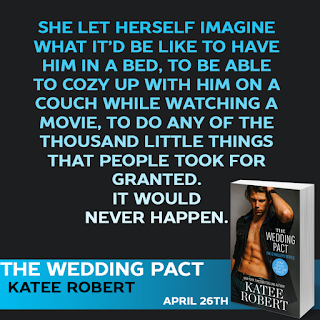 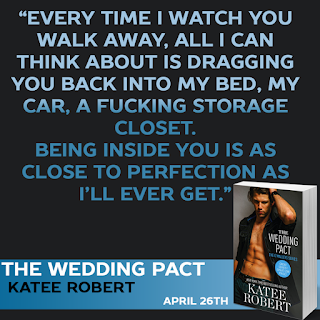 New York Times and USA TODAY bestselling author Katee Robert learned to tell her stories at her grandpa’s knee. She found romance novels at age twelve and it changed her life. When not writing sexy contemporary and speculative fiction romance novels, she spends her time playing imaginary games with her wee ones, driving her husband batty with what-if questions, and planning for the inevitable zombie apocalypse.