Release Blitz: Always for You: Jack by Alexis Morgan 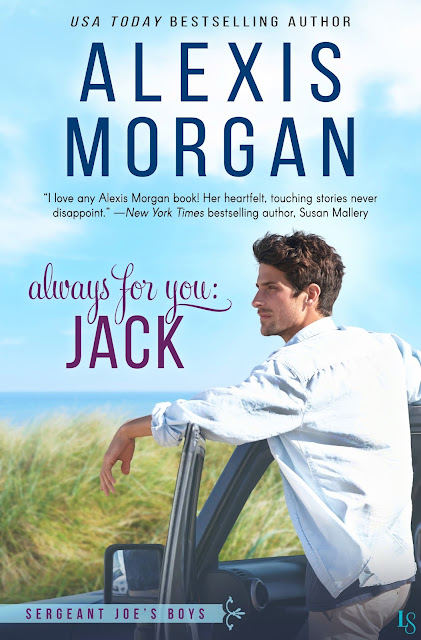 Praised by Susan Mallery as a bestselling author whose “heartfelt, touching stories never disappoint,” Alexis Morgan introduces Sergeant Joe’s Boys: three brothers living up to a legacy of courageous military service—and pursuing the women who have captured their hearts.

No one understands family loyalty like Jack McShane. He’d do anything to honor his foster father’s last wishes, even if it means putting his own plans on hold to manage Joe’s construction business. An ex–Special Forces operative, Jack thrives on the thrill of globe-hopping rescues. But now he’s needed closer to home. His foster mother has her hands full with a troubled teen, and when Jack meets the hired tutor, he discovers a woman who stirs his protective instincts—and his deepest desires.

Caitlyn Curtis knows that good looks can hide a hot temper. After an abusive marriage crushed her dreams of a happy ending, she swore off men—until one intoxicating dance in Jack’s strong arms breaks down every emotional barrier. Tough but tender, he leaves Caitlyn yearning for more of his gentle seduction. Despite the violence he’s seen, Jack is a good man. And even though passion can be dangerous, the promise of Jack’s kiss tempts her to believe that love is a risk worth taking.

Alexis Morgan has a BA in English from the University of Missouri–St. Louis. She and her husband make their home in the beautiful Pacific Northwest. Alexis shares her office with two parakeets, who rock out to her favorite music and keep her company while she’s writing.

A lifelong avid reader, Alexis loves spending her days creating worlds filled with sexy warriors and the strong women who love them. She has been nominated for numerous industry awards, including the RITA from the Romance Writers of America, the top award in the romance genre.

Posted by Margay Leah Justice at 9:17 AM

Email ThisBlogThis!Share to TwitterShare to FacebookShare to Pinterest
Labels: Alexis Morgan, Always for You: Jack, GIVE ME BOOKS, Release Blitz