COVER REVEAL: In Your Dreams by Ginger Scott

We are so excited to share the cover of IN YOUR DREAMS by Ginger Scott releasing on March 29th! Add it to your TBR below. 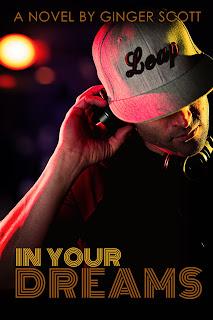 
BLURB:
Casey Coffield has a growing list of personal flaws he keeps locked away in his head:
He’s never on time.
His list of IOUs to his best friend is endless.
Money is always short.
Goals are never in reach.

Oh, and he’s decided to add college drop-out to that list, too. He doesn’t really think that last one’s such a bad thing, but his family insists it is, so it stays on the list.

On paper, he’s a zero. But in person, when he’s mixing tracks for a sea of bodies at the hottest clubs and parties, he’s downright irresistible. Just-right stubble on his chin, body of a boxer and a smirk that stimulates all the right nerves—women have never been a problem. They flock to his swagger and fall for his charm…fast.

All except for this one.

Purple hair, gray eyes, a raspy voice and sass, Murphy Sullivan is a little bit country and a little bit rock-n-roll. And her and Casey? They have history. He can’t remember it, but she wrote a song about him—and it’s not exactly a love song. But it is good. Damn good. And uncovering her inspiration just might be the key to solving a few of his shortcomings—not to mention open doors to his own big break in the music industry.

But sometimes dreams get messy when they collide. Sometimes life changes patterns. A past paints the wrong picture and futures get cloudy. The only question that remains is who will you choose when the dust settles—you? Or the girl of your dreams?

EXCERPT:
“Want to hear a cut?”

She folds her hands around her body and nods, her eyes bright. I pull out the Ratatat song she was listening to with her brother and let it start rolling, setting the intro to loop. Then I break up the beat with some new layers, so the song is recognizable, but unique.

“That’s so unbelievably cool,” she says, her body moving to the rhythm.

I’m about to blow her mind. I’ve had this planned since late last night, and the effect is better than I could have dreamed. I want to see her dance. I wait just long enough, smiling at her and moving my head along with the vibe until I feel it in my gut. There’s always a moment—it’s what makes me good. I’ve had it since the first time I touched a soundboard. I can sense when the craving is at it’s peak, when the room wants more. It’s like a slow-building orgasm, and I bring everyone to the brink, feeling their bodies fall in line with the count, giving their minds over to the melody. This is the high I was talking about, and Murphy—she’s there. Her eyes are closed and her body is moving more than I think she realizes, and it’s the hottest thing I’ve ever seen.

I’m about to be her undoing without even laying a hand on her.

My finger poised over the button, I wait until it’s just right to let the first drop go. I picked Nina Simone because she’s jazzy, just like Murphy, and she’s full of fire and there’s a swagger in her song—the moment her voice breaks through the beat, Murphy knows. Her eyes drag open and her body keeps swaying. Baby grays are looking at me and smiling. Her chest is rising and falling off rhythm even though her body keeps tempo. It’s because I’m in her head now—my song is in her head, and she’s feeling something different, something more.

The break I built is coming up, and I know it—she’ll shiver. I step close, letting my headphones slip around my neck. I come closer and watch her for a sign that I shouldn’t move more. She doesn’t stray—she’s drunk in seconds, and she wants me near. The break happens, and her heat tilts back as she closes her eyes, and that goddamned perfect neck is exposed and my lips come close enough to touch it. I don’t, but I linger, letting her feel my breath on her skin, small bumps rising in reaction. Chemistry and biology—beautiful. My nose grazes just below her ear as my hands carefully slide on her body, careful to touch in just the right place above her waist. She doesn’t flinch because she’s given over to the feeling—the performance of it all. That’s all this ever is. I fill rooms with pheromones and bodies become mine.

Right now, Murphy is completely in my control. My hands urge her to turn, and her body spins slowly, every curve brushing against me until her back is flush with my chest. I drag one hand around her waist and up her spine, my palm flat as it follows the line of her zipper, my thumb feeling the jagged metal and my mind imagining dragging it the opposite way. I close my own eyes as my hand pushes against her neck and my fingers find her hair, sweeping it up in my hold so my mouth can play against her ear. I bring my hand down carefully, both of us moving together to the sexy beat I built just for her, and I hold my breath as my hand opens wide and splays under her breasts, holding her tight against me.

My thumb close to god, I feel her lungs grow inside her, her breathing deep and desperate. I could take her now, but that…that would be a mistake. I only wanted to get this close—to feel this much. I wanted to see if my powers worked on her as well. They do, but hers have the equal effect on me. My mouth watering and my cock growing hard, my eyelids grow heavy as my self-made rules fight against my desire.

Leaning into her, my lips press against the inside of her neck, marking her with a cool kiss as my tongue takes one, tiny taste of her skin before my mouth finds her ear.

“This is what I do, Murphy. I…can make people…do…whatever…I…want,” I whisper, and her breath falls away completely, her head dropping back against me, her hands moving to my wrists and holding me with a tight desperation that begs for more.

My eyes close, and I indulge for a few seconds, dragging my hand up her body again, careful to not touch her too intimately despite how badly my hand wants to go there. I trace her bare shoulder and move to her neck, my thumb running over the zipper that it now considers the enemy. I push her slowly in front of me, giving us just enough space for me to let my head fall against the back of hers so my eyes can rake over the perfect line of her neck one last time. My mouth moves forward, wanting to taste more, but I puff out a breath instead and let go of her completely, knowing a second longer is the difference between being able to stop.

I kill the sound. An abrupt edge. And Murphy takes a step forward, as if I’ve just released her from a trance. I have. But I can put her back under it any time I want. And I intend to. 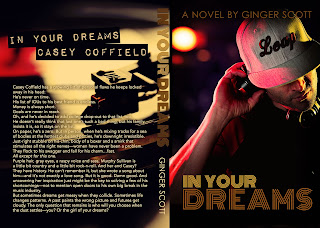 Ginger Scott is an Amazon-bestselling author of eight young and new adult romances, including Waiting on the Sidelines, Going Long, Blindness, How We Deal With Gravity, This Is Falling, You and Everything After, Wild Reckless and The Girl I Was Before.

A sucker for a good romance, Ginger’s other passion is sports, and she often blends the two in her stories. (She’s also a sucker for a hot quarterback, catcher, pitcher, point guard…the list goes on.) Ginger has been writing and editing for newspapers, magazines and blogs for more than 15 years. She has told the stories of Olympians, politicians, actors, scientists, cowboys, criminals and towns.

For more on her and her work,
visit her website at http://www.littlemisswrite.com.

When she's not writing, the odds are high that she's somewhere near a baseball diamond, either watching her son field pop flies like Bryce Harper or cheering on her favorite baseball team, the Arizona Diamondbacks. Ginger lives in Arizona and is married to her college sweetheart whom she met at ASU (fork 'em, Devils).