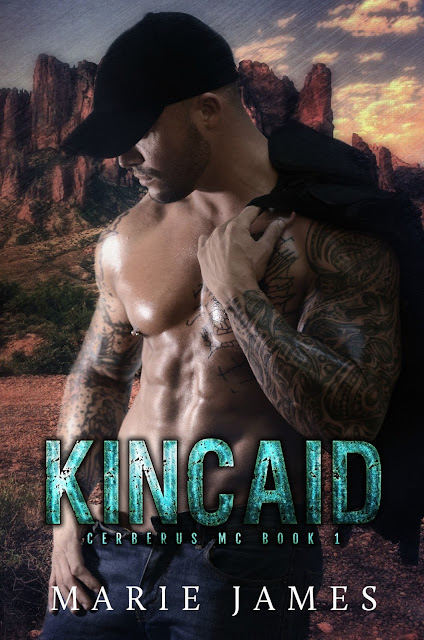 I am Emmalyn Mikaelson.

My husband, in a rage, hit me in front of the wrong person. Diego, or Kincaid to most, beat the hell out of him for it. I left with Diego anyway. Even though he could turn on me just like my husband did, I knew I had a better chance of survival with Diego. That was until I realized Kincaid could hurt me so much worse than my husband ever could. Physical pain pales in comparison to troubles of the heart.

I am Diego “Kincaid” Anderson.

She was a waitress at a bar in a bad situation. I brought her to my clubhouse because I knew her husband would kill her if I didn’t. Now she has my protection and that of the Cerberus MC. I never expected her to become something more to me. I was in more trouble than I’ve ever been in before, and that’s saying a lot considering I served eight years in the Marine Corp with Special Forces. 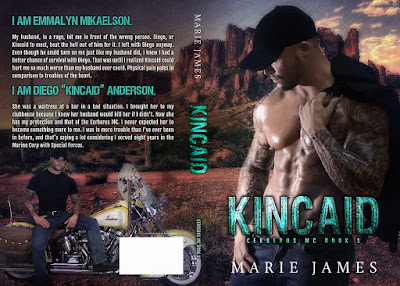 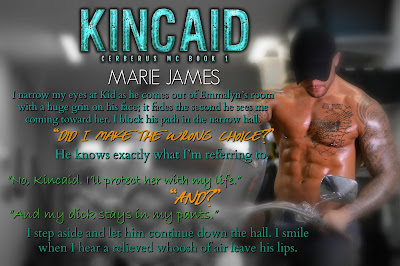 
“Since you kissed and made up does that mean I get to stay at the clubhouse tonight?” I turn my attention from Em as she flits around the bar like she’s worked here her entire life, and look at Kid, who has a hopeful look on his face.

“I just figured since you guys,” he does this weird side pump with his hand at his waist, “you know… I figured you’d be staying there with her.”

“I told you we took a nap.” I tilt my already warm beer to my lips and take a sip.

“Really? I thought that was code for getting laid or something.” Shadow laughs boisterously beside him.

I grin when Kid’s face falls and realizes that what Shadow just said is a pretty accurate analysis of the situation.

“If you’re having trouble sealing the deal, Prez, I can give you a few pointers.” The scrape of Shadow’s chair as he moves away from Kid makes my lip twitch in an almost smile.

Shadow’s reaction would be fitting almost any time one of the guys made some dumb ass remark about me not being able to handle any type of situation. Kid is lucky I was able to wrap my arms around Emmalyn for a few hours this afternoon, or his ass would be laid out on the nasty bar floor by now.

“First off,” I say putting my beer down on the table, “I don’t need any pointers from you.” I tap his chest with my finger. “Second, if Em was just some other piece of pussy to me, I’d have already had my one and done.” I lean in closer, so he knows how serious I am. “You don’t need to worry about my dick and what it’s doing or not doing with Emmalyn.”

Shadow laughs again, and I can’t help but join in at the wimpy sound of Kid’s admission.

I hit the side button on my phone to check the time. “You have three hours until I take her home. If you need to get your dick wet, you better do it in a hurry. I expect you back at Doc’s no later than one-thirty.”

He jumps with an ear to ear grin, slaps me on the back, and whistles loudly to a blonde across the room. I watch as she downs her drink, grabs her purse, and heads to the front door.

“Thanks, Dad,” Kid whispers in my ear as he heads in the direction of his all-too-willing conquest of the night. 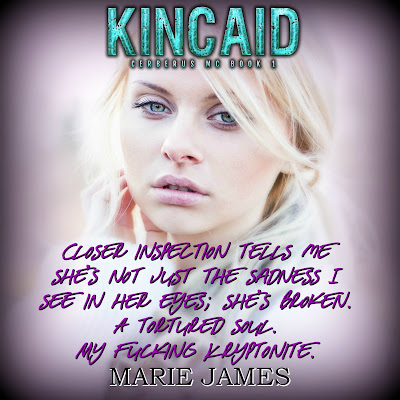 Marie James: I’m a full-time, working mother of two boys and wife of 11 years. I've spent almost my entire lifetime living in central Texas, with only short stays in South Carolina, Alabama, and Florida. I've always wanted to write novels and just recently had the gumption to sit down and start one. My passions include reading everything under the sun and plotting out new books to write in the future.

Kincaid is my 7th book. I’ve also written the Hale Series, Love ME Like That, and a FanFiction named Psychosis, featuring up and coming cover model, Matthew Hosea, as the main character. This book was done for fun and all of the proceeds are going to charity. All of my books are currently available on Amazon.

My current work-in-progress is a TOP SECRET FanFiction. 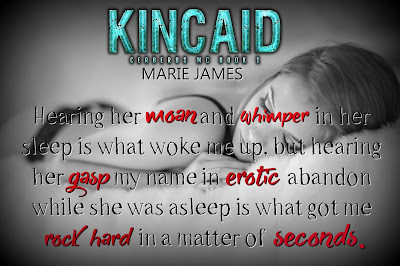