Blog Tour and Giveaway: For Seven Nights Only by Sarah Ballance 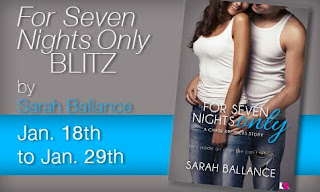 For Seven Nights Only by Sarah Ballance
Release Date: January 18, 2016 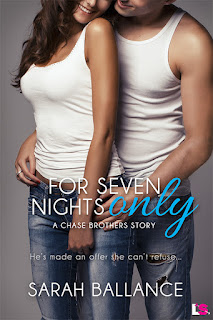 Kelsie Reed is over bad luck and bad men. Newly dumped, she’s now the pathetically single maid of honor in her sister's wedding—and her ex is the best man. But then a plumbing meltdown in her apartment sends her sexy neighbor running to her rescue. He’s got "serial dater" written all over him, which is unfortunate because the man is hot.

Sawyer Chase loves women, but settling down? He’ll leave that to his brothers, thank you very much. But when Kelsie confesses she’s a dating disaster and is about to become the laughing stock of her family wedding, Sawyer takes control. He's got one week to teach her how to land the man of her dreams, and he’ll do it on her terms: no touching, no kissing, and definitely nothing more.

But some rules need to be broken, especially when, for once, there’s something on the line worth fighting for…

For Seven Nights Only by Sarah Ballance Excerpts

“You’re pretty when you smile.”

“Thank you.” She paused, then shot him another look. He’d caught her off guard with his seemingly honest compliment, but he was a player, no doubt playing his game as a reflex. “You do realize this is about you giving me tips on attracting a man, and not about you trying to attract me?”

“I’m not trying, sweetheart. But now that you mention it”—he snagged her elbow and gently pulled her out of the flow of sidewalk traffic, Marmaduke trotting behind—“part of attracting a guy is having confidence.” As he spoke, he maneuvered her against the wall, propping his coffee-holding arm beside her and leaning treacherously close until she could feel the heat of his skin.

“Lesson number one,” he said. “There’s not a man alive who won’t fall over himself to get to a woman with confidence, but you’ve got to believe in yourself. The sexier you feel, the more attractive you’ll be. I bet if you…unburied yourself from those mounds of clothes you wear, you wouldn’t need me at all.”

Stunned, she twisted her head to look at him. Big mistake. Green eyes studied her with a ferocity that made no sense, considering the lazy sprawl of the grin that overtook his lips.
“I’m not taking off my clothes,” she managed. Barely. “But nice try. And next time, do us both a favor and spare the theatrics.” Despite her irritation with him, her heart stuttered in her chest, the busy New York street a mere backdrop to the sudden intimacy of his whispered oath. His clean scent enveloped her, lingering with that of the coffee to dull everything that wasn’t pegged on him.

“Let me make one thing clear,” he said softly. Intently. “Theatrics aren’t my thing. I don’t bullshit. If I say a woman is sexy, it’s because I mean it. And if I say I want her, I mean that, too.” He paused, giving a passing glance to Marmaduke, who was in a fierce tug-of-war with Sawyer’s shoe string. The string appeared to be winning. “And make no mistake, sweetheart. Should you ever bring yourself to admit out loud that you want me to fuck you, assuming I’m not otherwise occupied, you damn well better brace yourself.”

It was a good thing she had the wall at her back. She needed it. His words, a thinly veiled seduction, tore at her defenses. It had been too long since anything had.

But if he thought she’d fall for his playboy games, he’d better think again.

“I have a better idea,” she said sweetly. “How about I save the trouble of all that bracing, and you go fuck yourself instead?”

​***************
EXCERPT #2
​
Kelsie, inexplicably, was a beacon. Despite the lack of caked-on makeup, she should have blended in with the crowd, but instead she beckoned Sawyer without even trying. And maybe that was it. Normally when a woman caught his eye, it was a blatant invitation. Kelsie, with her fresh face and increasingly exuberant smile, was a knockout—one who didn’t seem too damned interested in him. And he hated how hard that sucked.

The redhead who’d approached him earlier caught his eye. She was dancing with some other woman, both too drunk to do anything but bounce off of each other and anyone who happened to be nearby. She winked.

Unfortunately, right back to Kelsie. He didn’t even see the man she was with. Just the long expanse of leg that stretched between the hem of her dress and those damned shoes. He wasn’t sure he’d ever noticed a woman’s shoes before, but he wanted to take those off her feet with his teeth. Or maybe leave them on while he drove into her, her legs slung over his shoulders while she fisted sheets and screamed his name. Of course, the way she moved, she’d probably blow his mind with something slow and sexy. He could already see that long, lithe body stretched out on his bed, curving against his, crisp sheets twisted, kisses not coming fast enough.

Sawyer probably looked like some kind of stalker glaring from the shadows, but he couldn’t take his eyes off her. Her every sway was a seduction. She moved like an angel—or the devil incarnate—and he wasn’t the only one noticing those slow, sexy undulations. One guy cut in, then another. The way she maneuvered out there on that floor made him achy and feverish, and that had to be the alcohol. He couldn’t believe the motions were foreign to her. Three whole songs passed, and she never even looked his way. Then her dance partner pointed toward the bar, and as she looked up, her gaze tripped over Sawyer’s.

Though every predatory, possessive jackass cell in his body demanded otherwise, he didn’t flinch.

She hesitated, but only until her the guy tugged on her hand. At first, Sawyer thought he was taking her to the bar, but the guy nodded to someone and led her toward the back. Sawyer momentarily lost sight of them. Then he saw Kelsie ducking into a doorway. Alone.

Sawyer took a deep breath, too goddamned aware of how he’d felt when he thought she was about to get screwed sideways in the supply room. He stood there, his limbs threaded with tension, ready to wipe some guy off the planet, and all because he’d shown Kelsie the way to the restroom.

He needed a fucking grip.

Kelsie emerged a moment later, saw him, and froze.

Yeah, like that would last. The last guy hadn’t dragged her to the back room, but that didn’t mean the next one wouldn’t. This time he didn’t hesitate, and he didn’t care how he looked. He just closed the distance between them and took her hand.

​Kelsie crossed her arms. Raindrops fell and staggered lazily to the valley that formed between her breasts. “So in other words, you’re worried someone will treat me, I don’t know, the way you would? Given half the chance, I mean.”

“Believe me,” Sawyer said darkly, “I got the message about that yesterday.”

The tinge of hurt in his voice caught her off guard. “I should thank you—”

“You’re so goddamned beautiful,” he said. He stood there in the spitting mist, like he didn’t notice the rain, staring at her like she represented some mystery he didn’t understand. “I’ve never seen anything like it.”

And then she realized something. “That’s not one of your lines, is it? You really believe I’m beautiful?”

She waited for a smile. A laugh. Anything to break the moment into manageable pieces, but instead it loomed, scary big. And she wasn’t sure why. Not until she realized he was going to kiss her.

And that she wanted him to.

The light staccato of rain hitting the pavement didn’t come close to drowning the beat of her heart. She watched him close the distance and convinced herself the tremble that overtook her was the cold. Definitely not him. Not with the warmth of the fingers that threaded through her wet hair, capturing her breath. He paused there, his head slanted inches from hers, giving her every chance in the world to stop him. But she didn’t. She couldn’t. Instead, her brown eyes fluttered closed under the heat of his green ones, and it was all the invitation he needed. His lips touched hers, a soft brush that left her shaky and needy. Wanting more. And he gave it. He slanted his head, and on the heels of her gasp he deepened the kiss. Slowly, passionately, he tasted her. No games. No teasing. Just an all-consuming desire that had her melting into him, electricity coursing through her like lightning while she stood, drenched, in a damned puddle.

Dangerous was an understatement.

The last shred of restraint she harbored thinned and snapped, and she gave in. Gave fully. Couldn’t breathe from her want of him.

When the kiss broke, she was left breathless. Bewildered. And it wasn’t just her. The look on his face suggested he’d been hit by the same truck.

“This isn’t a good idea,” she managed. “We were drinking.” Rain fogged her glasses, but something else fogged her head. Something that had absolutely nothing to do with the alcohol she no longer felt and everything to do with the kiss she still did. Touching her fingertips to her lips didn’t erase the mark he’d left on her, and she had a feeling that no amount of standing in the rain would remedy that. She swallowed hard under his silent, lingering scrutiny and fought an ache that shouldn’t be anywhere near their corner of the rain-soaked world. “We just shouldn’t.”

“Yeah,” he said, his voice impassive.

Clearly they were on the same page.

So why did she suddenly feel so alone?

Sarah and her husband of what he calls “many long, long years” live on the mid-Atlantic coast with their six young children, all of whom are perfectly adorable when they’re asleep. She never dreamed of becoming an author, but as a homeschooling mom, she often jokes she writes fiction because if she wants anyone to listen to her, she has to make them up. As it turns out, her characters aren’t much better than the kids, but nevertheless, you’ll find her writing sexy contemporary romance for Entangled Publishing until they throw her out. To learn more, visit http://sarahballance.com.


Posted by Margay Leah Justice at 9:00 AM