When a King loves
He loves hard

INDY
I’m back in town but only because I have to be.
I’m here to help my mom bury my father.
And the sooner we get it done, the better.
Because I want to see Cade as much as I want a hole in the head.
He broke me once—no, he broke my everything— and I’ll be damned if I’ll let him do it again.
Get in and get out. That is the plan.
But you know what they say about best-laid plans.


“This book drew me in from the first page and I couldn't put it down.” — Goodreads Review

“Cade and Indy’s journey was all kinds of angsty/swoony goodness.”— Goodreads Review

“This story is gonna grab you hard and not let go until it's ready. This story is full of angst and redemption! It's going to make you feel ALL THE FEELS!” — Goodreads Review

“This book right here.... OMG kept me on my toes. I finished it in one sitting. The author had me captivated the whole time.”— NetGalley Review

Penny Dee writes contemporary romance about rockstars, bikers, hockey players and everyone in-between. She believes true love never runs smoothly, and her characters realize this too, with a boatload of drama and a whole lot of steam.

She found her happily ever after in Australia where she lives with her husband, daughter and a dog named Bindi. 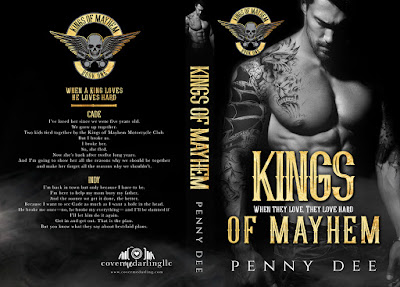 Posted by Margay Leah Justice at 10:37 AM

Email ThisBlogThis!Share to TwitterShare to FacebookShare to Pinterest
Labels: GIVE ME BOOKS, Kings of Mayhem, Penny Dee, Pre-Order Blitz