At least, that’s what I tell myself when I bargain with the enemy and score a renovation for my hair salon.

He’s got a body and face the Greek gods would envy but his personality needs a major overhaul.

He’s surly.
A rule-follower.
Did I mention he’s seen me naked?

I may have crushed on him for years, but the only place I want Nick swinging his hammer nowadays is at my salon.

Except, he needs something in return. . . 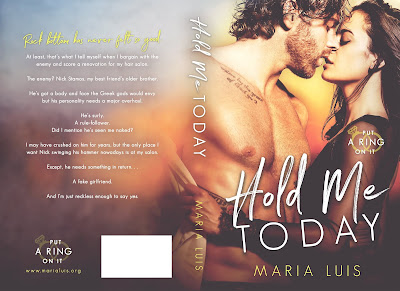 Maria Luis is the author of sexy contemporary romances, though she may or may not have a few historical romances hiding in the cobwebs of her computer.

When she's not writing about strong men and the sassy women who sweep them off their feet, Maria is a historian who specializes in medieval England and 19th century New Orleans. What do the two eras have in common, you ask? Not much, except for disease, scandalous activities and crime--Maria's favorite topics.

Maria lives in New Orleans with her better half, where she can generally be found hiking with her two dogs, Zeus and Athena, kayaking in Louisiana's inter-coastal waterways, or curled up on the couch with a good book.

a Rafflecopter giveaway
Posted by Margay Leah Justice at 9:45 AM