Cover Reveal and Giveaway ($25 Amazon gift card): Give It To Me by Willow Winters 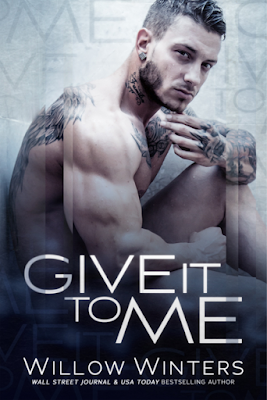 No one knows what I think late at night, all alone in my bedroom.
How could they when I’ve never spoken the words?
He seemed to sense it though.  His eyes pierced through me, stripping me and baring my darkest secrets.
Maybe it’s because I fantasized about him.  It was his lips on mine, his hands that pinned me down.  His rough stubble that scratched along my neck as he told me what to do.
It was natural that my thoughts would be consumed with him.  After all, I’d fallen in love with him years ago, but it could never be for so many reasons.
I should have kept my mouth shut.
The second the words were spoken, there was no stopping them.
“Tell me you want it,” his rough voice cut through the night and I couldn’t resist.  It was a command I’d fallen prey to, and that’s where my story really begins.
I told him everything.
And he told me he’d give it to me.
Even if it killed me. 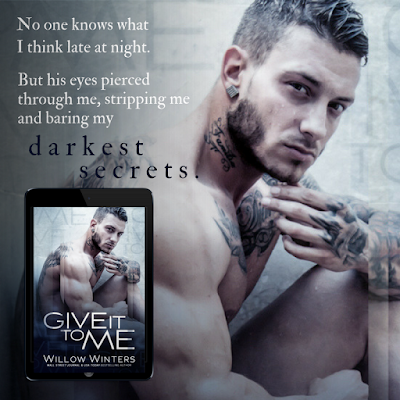 
Want to receive a text alert on release day?

Willow Winters is so happy to be a USA Today, Wall Street Journal and #1 Contemporary Bestselling Romance Author. She likes her action hot and her bad boys hotter. She certainly doesn’t hold back on either one in her writing!

Willow started writing after having her little girl, Evie, December 2015. All during her pregnancy with Evie she continued to read and she only wanted to read romance. She was reading a book a day — sometimes two.

In January 2016 Willow was staying up late with Evie and just thinking of all these stories. They came to her constantly so she finally sat down and just started writing. She always wanted to do it so she figured, why not? Today Willow cannot be happier for making that decision!

a Rafflecopter giveaway
Posted by Margay Leah Justice at 9:43 AM

Email ThisBlogThis!Share to TwitterShare to FacebookShare to Pinterest
Labels: $25 Amazon gift card, cover reveal, Give It To Me, GIVE ME BOOKS, giveaway, Willow Winters