Blog Tour: BECAUSE OF HIM by Terri E. Laine

Because of Him by Terri E. Laine

Because of Him an all-new romance by Terri E. Laine is available NOW!

Because of Him an all-new romance by Terri E. Laine is available NOW!

Past and present intertwine with light and dark to tell a story ...Because of Him
Something inside me fiercely craves normal.
Sheltered all my life and taught to be afraid, I want to be bold, fearless.
Up until now I've kept myself and my heart safe.
Tade Astor, a guy so hot he steals my breath away, jeopardizes it all.
He isn't the kind of guy to give up on what he wants—me.
He’s determined to prove my safe world is missing something—him.
Even though he may not be the cocky guy I assumed him to be...
He’s definitely not the guy I should give my heart to.
But each time I see him, he becomes harder to resist.
I want to be brave and give him a chance... though it might come back to haunt me.

At the heart of Because of Him is a love story. But due to certain sensitive topics, it might not be suitable for all readers.

She glanced down, allowing her hair to create a wall between us. “You don’t even know me," she said.

“I know you keep one side of your hair tucked behind your ear to reveal a tiny hoop earring pierced halfway down the curve of your ear. The piercing is most likely an act of defiance against your traditionally minded parents. You reveal it to show you’re your own person. But it’s the other side of your hair that hangs loose to hide your face that’s so telling. There is a part of you that’s a rebel but doesn’t want to be seen at the same time.”

While she sat dumbstruck, I reached out with my hand and allowed myself the touch of her cheek before brushing the hair to secure it behind the other naked ear.

“You shouldn’t hide a face as pretty as yours.” 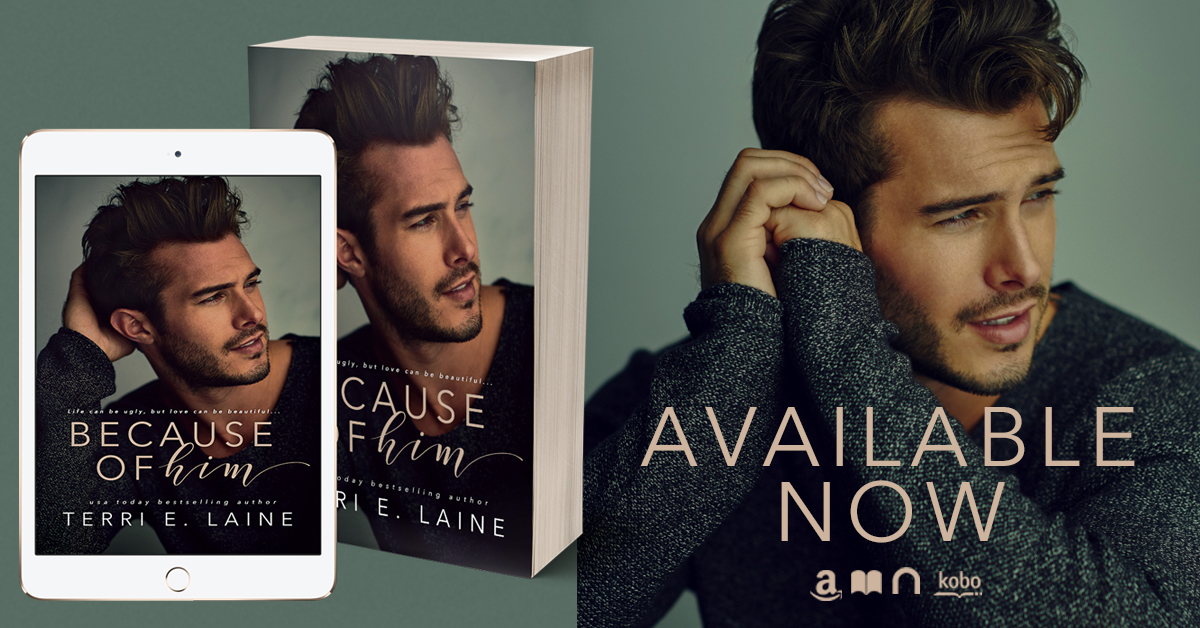 Terri E. Laine, USA Today bestselling author, left a lucrative career as a CPA to pursue her love for writing. Outside of her roles as a wife and mother of three, she’s always been a dreamer and as such became an avid reader at a young age. Many years later, she got a crazy idea to write a novel and set out to try to publish it. With over a dozen titles published under various pen names, the rest is history. Her journey has been a blessing, and a dream realized. She looks forward to many more memories to come.

Email ThisBlogThis!Share to TwitterShare to FacebookShare to Pinterest
Labels: BECAUSE OF HIM, blog tour, Social Butterfly PR, Terri E. Laine