Enter to Win a $25.00 Amazon eGift Card and
an ebook copy of MANACONDA 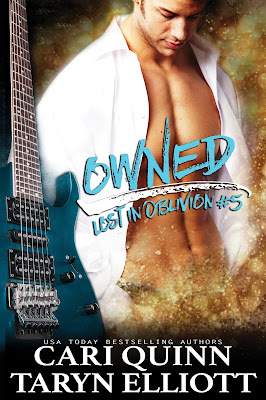 Music kept them going. Now it's torn them apart…

Guitarist Nick Crandall lost the most important thing in his life—his band—just as he was falling in love. A year has passed, and Oblivion is returning from hiatus. And Nick is ready to ask Lila to spend forever with him, even if he won't have his best friend at his side for the ceremony.

Simon has spent the past year trying to find his way back to the thing that sustained him in his darkest hours, then grew to be his biggest demon. Margo has been at his side, but she's tired of him denying his dreams. With her help, he’s ready to admit it’s showtime.

Perhaps he's even ready to stand up for his best friend…and face him on the stage that united them so long ago.

It’s do or die, one more time.

**The guys—and their women—are in the driver's seat in Owned, and the ride's gonna rock. This is the final book in the Lost in Oblivion rockstar series.** 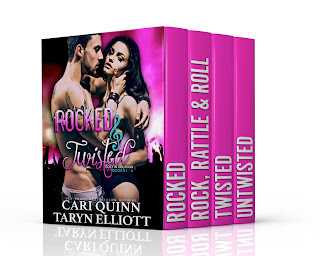 USA Today bestselling author Cari Quinn likes music and men, so she figured why not write about both? When she's not writing, she's screaming at men's college basketball games on TV, playing her music too loud or causing trouble. Sometimes simultaneously.

USA Today bestselling author Taryn Elliott is obsessed with rock stars, men, and her unending playlists--maximizing these things seemed like a very good idea. When she's not writing, she's losing hours to hot men on TV, and/or a graphic design project. Multitasking is her middle name.

They decided to combine forces and found that hey...this writing deal is even more awesome when you collaborate with your best friend.

And so Lost in Oblivion was born.