Blog Tour and Giveaway: The Wikomsette Series by Emerald Lavere 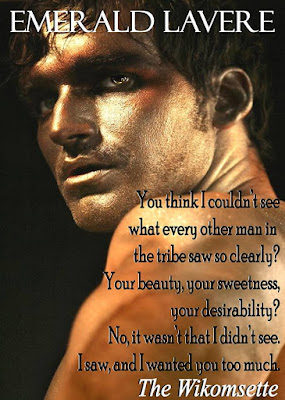 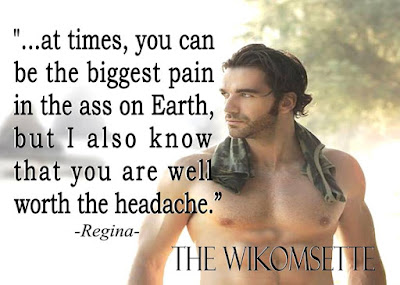 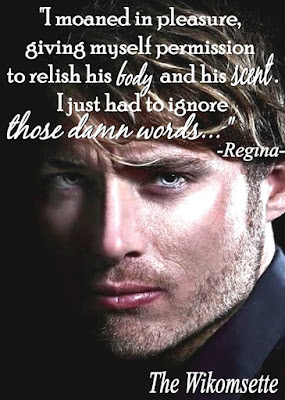 On Sunday—it must have been Sunday, because it was Wednesday when I’d arrived, and unless I was on a different planet…well, they sure looked like human men, acted like human men, felt like human men—anyway, it was Sunday to me, and all the men were resting. Some milled around the clearing talking and laughing, while others stayed in their quarters or swam in the nearby river.
Rayne was assigned to take me farther down the river where I could bathe privately.
Before I waded in, I asked, “What does it mean? Bisho un vu?”
Rayne sat cross-legged on the shore, absorbed in the black device he always carried. It was flat and about the size of a greeting card, and seemed to be a computer or tablet. He paused in his activity and answered in a solemn tone, eyes still on the device, “It means, ‘I offer myself to you.’”
“Oh.” That was surprising. “That’s rather romantic, considering I’m nothing more than a common prostitute here.”
“You are La Wikomsette!” Rayne snapped, frustration flashing in his icy eyes. “You are like a queen. They’ll do anything for you.” Then he finished bitterly, “There is no higher honor.”
“Why do you hate me?” I blurted. In my life back home, I didn’t open up to anyone, but here, so far from normal society, mincing words seemed an unnecessary formality.
“Don’t be stupid,” he replied with contempt. Concentrating on his device, he added, “Even if I did hate you, why would it matter? You have seven men here who would give their lives for you. If that’s not good enough, then you are a spoiled child and don’t deserve the love of even one of them.”
I seriously doubted love had much to do with anything. Mad horniness, maybe. I took off my clothes, and when Rayne didn’t show the slightest interest, I was stung by the insult. Maybe I was a spoiled child. But a wicked desire to harass him came over me.
Once in the water, I called, “I’ve figured it all out, you know.” That seemed to catch his attention, but he still didn’t look over or say anything. “You all are aliens, and I’m no longer on Earth.”
He burst out laughing. I smiled, pleased that I’d cracked his hard exterior. Also, it seemed I could cross that theory off my list. It was a lame one, anyway. The forest, or jungle, more like, was teeming with familiar wildlife.
“This doesn’t look like Earth?” he said, amused, gazing at the lush foliage around us. “Pity, we tried so hard to replicate your home planet to fool you.” He laughed at his own joke, then sighed. He shook his head and returned his attention to the device.
“Why did the men say that? About offering themselves?” I asked, splashing around in the pleasant water. “Not all of them did, though.” I wished Niku had said it. I would have liked him to, and Brannon was so affectionate, why hadn’t he?
After a moment, Rayne said, “In our…culture, a man says that only the first time he gives himself to someone.”
“But, it was the first time that each one…” I stopped midsentence, gasping as realization dawned. “Do you mean to tell me those men have never, ever been with a woman before? Ever?”
Rayne nodded.
After diving underwater to look for the soap I’d dropped, I came up and threw out my next theory. “Are you all from a monastery? Or some…weird cult or something?”
“Regina.” Even though he wasn’t looking in my direction, I could tell he was rolling his eyes. “Finish your bath. I don’t want to babysit you all day, and we have the Rest Day meal in a little while.” Despite the reprimand, his tone was lighter than before. Was this progress? Maybe he would learn to like me, after all.
“Your English is already flawless, and the others have learned so much. How is that even possible after so few days?” I asked while scrubbing my hair.
Rayne set the computer object down, stretched out his legs, and leaned back on his hands. “I’m not sure how to explain it well. But we have technology”—he waved a hand carelessly—“far more advanced than what you are used to—”
“How do you know what I’m used to?” Rayne had the annoying habit of talking down to me, and I was quickly growing tired of it.
“Are you done yet? Let’s head back,” he replied coolly.
“Almost. Sorry. Please tell me. Please?” I should really learn to keep my big mouth shut. He was annoyed again and waited a minute or two before answering.
“Well, the equipment is like a computer, a very, very small one. It houses thousands of languages. Ax identified yours the first day you came.” A dark look crossed his brow, and he went silent for several moments. Taking a deep breath, he went on. “I guess the most basic way to say it is we download the information into our brains, bits at a time. I already knew much of this language, so really I just had to fine-tune it.”
This was followed by several minutes of quiet while I climbed out of the water, wrapped up in a towel, and then just sat as I pondered the implications in his explanation. Rayne eventually glanced my way. “You’re androids?” I asked in a whisper.
“Oh good gosh, you are ridiculous! Get your clothes on. I’m starting back now, and you can keep up or get lost out here.” He stood and started walking while I pulled on my clothes as quickly as possible. I still almost lost him in the brush as I tripped over myself and tried to catch up.
Title: A Wife for the Future
Series: The Wikomsette #2
Author: Emerald Lavere
Genre: Adult, Erotic Fantasy
Published: January 18, 2016
Publisher: Loose Id

A Wife for the Future Excerpt © Emerald Lavere 2016