Blog Tour and Giveaway: How To Save A Life by Andria Large 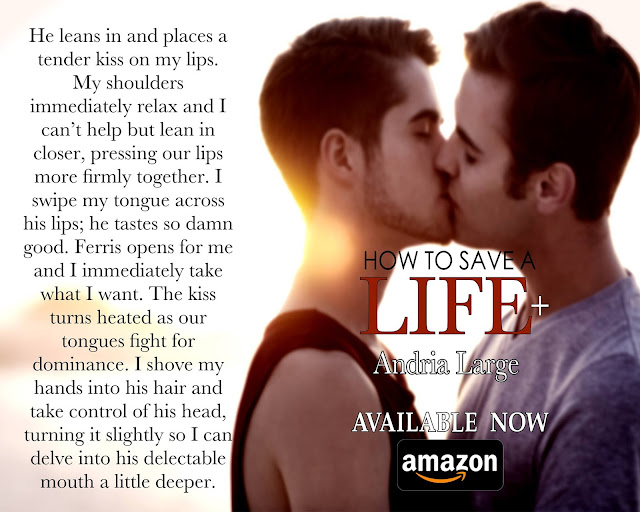 Excerpt from How To Save A Life © Andria Large 2016

So, Ezra and I head for the dance floor. We find an open spot in the midst of the crowd that is mostly girls. I find out very quickly that Ezra is a really sexy dancer. Oh, what I would give to be all over that delicious body of his. He rolls his body like a goddamn male stripper. I’m mesmerized and completely turned the fuck on.
A young girl, probably in her mid-twenties, dances her way in front of Ezra. She puts her back to him and shoves her ass in his crotch. She’s a cute girl with a nice body. Ezra’s eyebrows shoot up and his wide eyes meet mine. He actually gives me a “Help me!” look. Apparently, he’s not ready to have a young girl bumping and grinding on him. It seems that even though my friend is lonely and could use some lovin’, it doesn’t look like he’s ready to have some chick he doesn’t know rubbing herself all over him.
Ferris to the rescue!
I step closer and grab Ezra’s hand, pulling him out from behind the girl and up against my side. I wrap my free arm around his waist and pull him in so that we are touching from chest to thigh. Ezra can no doubt feel my erection against his hip, but it can’t be helped.
“Hey!” the girl, who looks downright pissed, yells over the music. “I was dancing with him!”
“Sorry, hun, but he’s with me, and I’d appreciate it if you kept your skanky ass away from his cock,” I drawl, palming Ezra’s ass for effect.
I feel Ezra’s hand snake around my waist, causing goose bumps to pop up all over my skin. The girl rolls her eyes and mutters something about all of the hot ones being gay, before stomping off through the crowd. I smile my triumph and turn to look at Ezra, who is so close that our noses touch when I face him.
My breath catches as a wave of desire hits me hard. Shit, I would love to seal my lips over his right now. I swear that same look is in his eyes again; but this time, the lust has been cranked up a notch. He looks like he’s actually thinking about kissing me, too.
“You might want to dance with me if you don’t want to get hit on,” I murmur just loud enough for him to hear me.
Ezra licks his bottom lip and gives me a jerky nod. “Yeah, okay, we can dance.”
We slowly start swaying to the music. I turn slightly so that we are completely facing each other and slip my thigh in between his. The arm Ezra has around my waist tightens, pulling me closer. His nose brushing my cheek and ear, sending shivers down my spine. We grind against each other. I keep my hand on his ass for show...okay, that's a lie; I just want to touch his ass. It's a very nice ass - firm and round - and I'm fairly certain that what I'm feeling against my thigh is his erection. Fuck me, I'm in so much trouble with this guy.

Email ThisBlogThis!Share to TwitterShare to FacebookShare to Pinterest
Labels: Andria Large, blog tour, giveaway, How To Save A Life, More Than Words Promotions