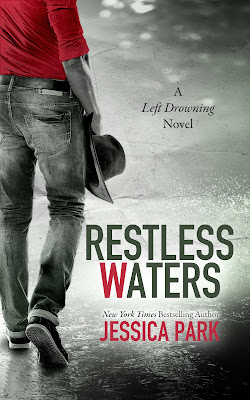 BLURB:
A storm is coming, and with storms come restless waters.

Pulled from the depths of catastrophe and depression, Blythe McGuire has learned to escape from her past while embracing the future. A future now entwined with the Shepherd siblings.

With Chris, she shares a staggering romance that kicks heartbreak’s ass.

With Sabin, she shares an intense friendship, one that’s becoming more complicated than either had expected. A friendship now being put to the test because Sabin’s brutal past still haunts him. Because trauma is the gift that keeps on giving without mercy.

Now Sabin is the one left drowning and struggling to breathe, and his turmoil threatens to send all three into dark currents they cannot escape. Even after going through her own hell, saving Sabin will take much more than Blythe had anticipated. Their connection and their love could help, but getting him to reach for her hand could be Blythe’s biggest challenge ever.

Jessica is the author of CLEAR, LEFT DROWNING, the New York Times bestselling FLAT-OUT LOVE, the companion novella FLAT-OUT MATT, FLAT-OUT CELESTE, and RELATIVELY FAMOUS. She lives in New Hampshire where she spends an obscene amount time thinking about rocker boys and their guitars, complex caffeinated beverages, and tropical vacations. On the rare occasions that she is able to focus on other things, she writes.

Posted by Margay Leah Justice at 10:03 AM