Join L.T. Getty, author of the historical fantasy/mythological novel, Tower of Obsidian, as she tours the blogosphere September 2 - September 27, 2013 on her first virtual book tour with Pump Up Your Book! 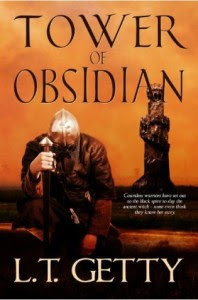 ABOUT TOWER OF OBSIDIAN

When Kale mac Tadhg is betrayed by his Lord’s men, he is sent on an impossible quest: slay a witch in a tower, and end a people’s curse. Both Kale’s best friend and brother-in-arms Aaron Smithson and former betrothed Aoife of Westgate set out to rescue him, but their journey takes them into the uncharted waters and Northwestern Nordic colonies, to a land cursed and all but forgotten. They begin to realize that there is some truth to old legends. Kale’s rescue comes at a price—for by the time Aaron and Aoife know where to search, like so many before him, Kale is bound to the ancient tower’s fate.

L.T. Getty obtained her degree in English from the University of Winnipeg , and has studied creative writing both there and at the Canadian Mennonite University.. She is an open-water scuba diver, has studied kendo, and currently works as a paramedic. To find out more visit her at http://ltgetty.wordpress.com

Posted by Margay Leah Justice at 7:26 AM

Email ThisBlogThis!Share to TwitterShare to FacebookShare to Pinterest
Labels: Book Spotlight: Tower of Obsidian by L.T. Getty, Pump Up Your Book Promotions