Synopsis:
Being strong is one thing. Being an unlimited source of power is quite another.

Genetically altered by the Organization, Annie Fox takes down criminals CIA-style with her luminary strength. With nothing to mend but her broken heart, she is relentlessly pursued by her boss Derek Lake. Just when Annie is about to give him a chance, her ex-husband unexpectedly comes out of hiding.

A wanted man, Nick Logan is a cold-hearted murderer who is considered enemy number one, and orders are clear: kill on contact. He is more powerful than ever and threatens the lives of those she holds most dear. His plan? Get his hands on Annie and use her Kinetic energy to destroy them all. When Annie finds herself with an opportunity to end him, she pauses, horrified by the scars covering the face she once loved. A split second that will cost her everything…

S. K. Anthony is a writer, a reader and a make-stuff-up-er who lives in New York with her husband and toddler twins. She is a wine connoisseur, which just really means she knows she loves it, and a caffeine addict. When she isn’t busy with her family she finds herself being transported into the world of imagination. Well, either that or running away from spiders…she is convinced they are out to get her! 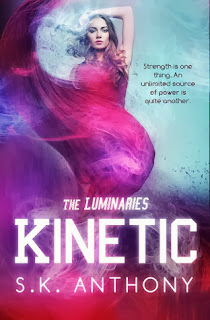 Coming to my feet, I ran into the vault and found myself at the bottom of what seemed like three floors. It was filled with storage units, all next to each other. It reminded me of prison cells, each of them with their own armored doors. I smelled more smoke coming from above, so I ran up the first set of stairs and let my nose guide me. I saw the figure trying to melt one of the armored doors, and I launched myself at him. He was ready for me, though, so I found myself thrown across the room like a ragdoll. I pretended to be injured as he approached me, and when he was close enough, I kicked his feet from under him and he fell, hitting his head on the concrete floor. I jumped on him and pinned his hands down just as he looked up at me.

And there he was, Nick Logan. My ex-husband.
I stared at the face I'd once loved, now with a patch covering his left eye and scars running all the way down his jaw. They were almost hidden under his days-old beard and wild, dark hair. His deep hazel eye looked at me, empty, daring me to speak first. I punched him.

I knew what I had to do. Orders were clear… KILL ON CONTACT.
The thing is, it was Nick.
Before I knew what I was doing, I'd released my hold. He got up and rubbed his mouth.

“What did I tell you about giving second chances?”

“Honey, you are so wrong! I wouldn’t even blink an eye, no pun intended,” he smiled. “Next time you won’t be so lucky. If you ever get the chance again, take it.” He shoved me down and gave me a hard kick in the ass. He started to leave but turned instead, his smile still plastered across his scarred face. “If you can.”

I watched him leave and took a deep breath. I had to give this some thought. I wondered if there was any excuse I could come up with that the Organization would believe. I was going to be in so much trouble. And it was possible they would even strip my abilities away. Although my job could be mentally exhausting, I knew that, deep down, I couldn’t give up what made me, me. I was a badass, I liked using my extensive training to bring down the bad guys of the world, and what had I just done? I'd let the worst of them walk away. I came into this Organization to serve a purpose, and I had never regretted it. Until now.

Nick had taken advantage of all the knowledge he’d gained when he was part of the Org. He was guilty of kidnapping, attacking government buildings, killing a lot of people, and was considered enemy number one for all Luminaries. But while I had no respect left for him, I couldn’t hate him. Not like the rest of them did. This was the man with whom I had exchanged wedding vows, the man who was once my whole world, and he had to be taken down. But he still had enough power over me that I'd let him go. Stupid heart. I never wanted to be one of those girls again, the ones who live for love or die for it. No, love no longer had any place in my empty chest.

The problem was, I'd found my heart staring at me through one eye, and I'd lost my shit.

I stooped down and back-elbowed him across his jaw. His head fell sideways, but not for long, he turned to watch me but said nothing. I got up and slammed a good kick to his side. He winced but remained silent.

“I’m about to call Derek, but I’d like to know what you’re after first.”

“Oh, RIGHT, what was I thinking? I should have called ahead to schedule an appointment for your capture. I just didn’t have your number!” I watched him in disbelief.

“I don’t have email or Twitter either. You know why?” His lip twitched. “I can’t have followers.”

I heard a chuckle from behind.

“What? No, it was just… I thought it was… funny,” she finished saying in a low voice.

I turned back to Nick and was about to grab his neck when I realized being that close to him would not be a good idea. If I allowed myself to get that close to him, he could hypnotize me to let him go, so instead, I kicked him.

“Now you’re just doing this for spite,” he said.

“Yes.” I kicked him again. “You started it at Worldsafe.”

“What are you, ten? I pinch you, you pinch me? Actually, I wouldn’t mind pinching you…” I was about to slam him again. “No, stop. Stop! Your kicks are more painful than mine. Stop it.”

“Any more requests? It seems you think you’re in charge here,” I said.

“Hardheaded woman! Stay here—let me at least make sure you chose the right train.”
I watched him go and come back in less than three minutes. “All of the passengers are packed into the last two cars, and it looks like it's five guys. Two of them are with the conductors…the other three are guarding the passengers. It doesn’t seem like they plan on stopping anytime soon.”

“Okay, well…I’m going to give them a little hand,” I said.

“Annie, we really shouldn’t be here.”

“Oh, come on. Don’t you miss us working together?” I asked, placing my hands on his chest and staring into his eyes.

He raised an eyebrow. “Are you trying to manipulate me?”
“I wouldn’t say trying, I’m just doing the right thing.” The train hit a curve, and I lost my balance, making me fall into his arms. He felt so good. I held on tighter and kept eye contact.

I ran all the way to the front of the train, channeling Beth’s speed. Jumping about twenty feet forward, I stood facing the train. A second later, I braced myself for the impact as the screeching sound sliced my ears. The hot metal indented its way around my hands, pushing me backwards for a while. A minute of this and I felt myself almost being crushed. I had been training with other Luminary powers lately, and right now, tapping into Beth’s speed was just draining me. Crap! I found it hard to focus, I was pretty sure I was going to be flattened by this train soon.

I spent the whole night reading all the files that Samantha had given to me, and I couldn’t find anything new. The next day, I was so tired that I left Kevin playing video games and went to take a nap in the middle of the day. In my exhausted state, I smiled, remembering the old Nick.

“Why are you crying?”

“Okay, well… here, take this,” he said, taking off his sweater while standing in the cold in his white T-shirt. “Your face is wet for some reason,” he smiled.

“You have mascara running down your cheeks. Come here,” he said, and wiped my face with his sweater. He was so gentle and caring and nice that my tears betrayed me and poured down my face, embarrassingly. He held me with my head against his hard chest for a long while.

“So you punched her. You’ll be all right.”

“No, they’re going to kick me out for not controlling my anger!” I squeaked.

I laughed. “What could you possibly do?”

“I’ll stand up as a witness. Lisa was pushing Beth around, and you stood up for your friend. Loyalty counts for Luminaries, you know.”

“Right,” I smiled. Now, looking at him, I couldn’t believe I had cried in his arms. “Why are you so nice to me all the time?”

“Ha! Don’t you go thinking you’re adding me to your list of girls here.”

“You’ve been training with me long enough to know I’ve stopped all that,” he said, pushing my hair behind my ears.

“So, you and I will happen. My kisses fix everything, by the way, so if you want to come closer I can—”

“Stop it, Nick. Not happening.”

He touched the tip of my nose. “Not today, maybe.”

“Not ever,” I said, still feeling the memory of his arms around me.

“I’m going to kiss you one day, I hope you know this.”

$25 Giftcard to Amazon plus more!


a Rafflecopter giveaway
Posted by Margay Leah Justice at 10:18 AM