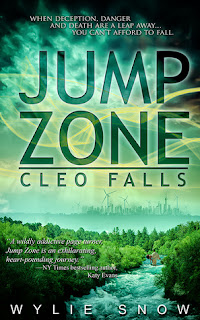 All Cleo wants, all she’s ever wanted, is the acceptance of her tribe and the love of her family... and she almost dies trying to earn it. But the man who saved her, who found beauty in her flaws and loved her without condition, has cruelly betrayed her, and she’s dying all over again.

Was it all lies? His words, his promises, his kisses? Lost in unfamiliar territory, Cleo will fight the forces that conspire to destroy her homeland, even if she has to do it alone.

Libra longs for freedom—from prison, from pretense, and from his birthright... but he’s caught in a political game where only greed and power can win, and Cleo Rush is the pawn. How much is he willing to sacrifice for liberty? His morals, his principles, the woman he loves? No matter which path he chooses, people will die, their blood on his hands. And it could be hers.

To save themselves and their world, Cleo and Libra must overcome the double tragedy that binds their families in hatred. Together, they might live. Apart, Cleo will fall.


Almost every author says they wanted to write from a very early age. Not me. I wanted to be a detective like Nancy Drew, or a wildlife expert like Jim Fowler or an archaeologist like Indiana Jones. Or have my own island resort and make fantasies come true!

I didn't do too badly with any of those...
I married a detective, worked in a zoo, explored ship wrecks instead of old ruins, and spent 18 glorious years living on a sunny island.


You’d think, since he saved her life, that Cleo would instantly fall into Libra’s arms in a heap of grateful, quivering lady-love. The physical chemistry is undeniable, but she doesn’t trust the urbanite as far as she could spit.
Cleo is a ‘triber’ from the Taiga forest and Libra hails from the city of Gomeda. They have some serious misconceptions to overcome and it doesn’t help that they’re both lying through their teeth about, well,… everything.

Also known as a boreal forest, the Taiga (pronounced ty-guh) is the world’s largest land biome and comprises 29% of the world’s forest. It circles the globe, with the largest bits located in Russia and Canada. The winters are long, cold and harsh. In Jump Zone, the Taiga is divided into regional tribes named for common animals like wolverine, beaver, bear, wolf, moose, etc...
Survivalists by nature, the tribers are protective of their lands, and their resources. Especially their energy source. Shhh… spoilers!

Libra is the Robin Hood of Gomeda. Born into a wealthy, powerful family, he eschews his high-born status and fights for the marginalized citizens living in the slums of Gomeda. His idealism gets him a sentence of hard labor in the penal colony but it also gives him the hardened edge he needs to survive the coming turmoil.


“For the record, I’ve never killed another human being. Not even a Banger.” Cleo Rush says this when defending her reputation against Libra’s assumptions that she’s some kind of savage. Second fave is, “You’ve never had bacon? You poor, deprived soul.”  Because… obviously!


I had an idea for a post-apocalyptic Romeo and Juliet type of story but the world didn’t begin building in my head until a family vacation took us on a drive through Northern Ontario. The untamed beauty of the landscape literally took my breath away. Miles and miles of uninhabited land, a stunning palette of greens and dark blues, harsh rocky outcrops. I thought, “What if I had to survive out here…”

Cleo Falls is book one of the Jump Zone trilogy. Libra Rising is scheduled to release in December 2013, followed by the series conclusion in the spring of 2014.

Taiga Forest
I’d always presumed the moments before death would be fuzzy and warm.
They’re not. Death is painful. And cold.
Death is terrifying.
For me, there are no sepia vignettes of my childhood, no sign of my mother’s smiling face to usher me into a blissful afterlife, open armed. There’s nothing to distract me from the fright that slams me every time my mouth fills, every time my head slips under.
No matter how hard I kick or thrash, the current is merciless, dragging me downriver, closer to the edge, closer to the—
I can’t even think the word.
I claw for the surface, flailing desperately for something to grab onto. But there’s nothing. Not a rock, not a log, not even a stray root. Even if by some miracle I don’t drown, there is nothing to save me from the fall.
Seventy feet, straight down.
And the rocks at the bottom… I’ll be smashed.
My chest burns so bad, I want to scream from it. Can’t, don’t dare. I bite down on the inside of my lips to seal them from another mouthful of icy water and taste the copper of my blood. I will my legs to get me to the surface for another breath, but I’m tumbling through the blackness, not sure which way is up.
The rapids twist and toss me, pull me fast and hard as if they’re doing me a favor in getting me to the edge quickly. It’ll be over soon. Yet every agonizing second feels never-ending.
The more my muscles ache from cold, the heavier my limbs become, the slower time goes. Death is a cruel bitch.
My lungs are on fire. And no matter that my eyeballs feel like they’ve been dunked in acid, panic won’t let me close them.
There’s a legend amongst my people of a Ghost Warrior, a survivalist from Old Canada who lost his life in the Polar Wars. They say he guides folks home in their time of need, gives them a second chance. Where is this phantom rescuer for me? Am I not worthy?
I already know the answer…
The pressure in my chest begins to crack me open. I acknowledge my fate, look it in the eye, welcome it. The thought frees me. The simple act of mental acquiescence releases my fear, replaces it with regret. And anger. I’ll never get a chance to make amends to my tribe, to Jaegar or my father, never feel the love I’ve tried so hard, so damned hard, to earn.
Anger fuels my strength, gives me a final burst of energy. My anaesthetized legs push off of something solid. My head breaches the surface.
I scream in Death’s face.
Then water fills me, douses my fire. I am numb, unable to feel my extremities, unable to feel anything. Like a piece of flotsam, the current tosses me over the precipice toward the jagged rocks below. My world goes dark.

Grand prize giveaway Open internationally Prizes: 2 winners for a 25$ Amazon Gift Card each Paste this code in your post's HTML to share the giveaway:

a Rafflecopter giveaway
Posted by Margay Leah Justice at 11:00 AM