Super Book Blast: The Art of Change by Kelly Andria, Plus Giveaway 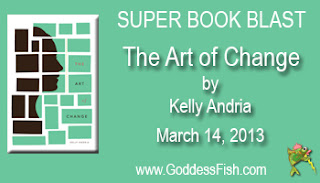 The Art of Change
by Kelly Andria

Gallery owner Nellie, a giving yet neurotic New Yorker, brings together a mismatched cast of characters in the opening of Ryan Whittaker’s debut, a phallic show. Little does she know that she is setting the scene for odd and unpredictable relationships, much like Shakespeare in Midsummer Night’s Dream. The frenzied, magical mix-up is an outrageous farce with a deep moral message: there is a RIGHT place for everyone in this world and love and friendship cement us in it.

The Art of Change is a funny, smooth reading romance, which deals with bridging differences in gender,  education,  social milieu, in an insane but pragmatic, modern fairytale, set in New York City. The twists of the plot are written without an ounce of cynicism but simply acknowledging that life is neither here nor there, neither black or white and all can be dealt with in real friendship and love.

“Vai, Pipino, a year ago, who would have thought we would be going to a ritzy art show—that’s high society, top-shelf society, Pipino!”

Pino Napoleon Castagnasis had been stacking his famous meatballs in his special aluminum container, one by one. He paused, meatball in hand.

“As caterers, Aurora, as caterers—hired help. Don’t you go filling your head with hot air. Mrs. Nellie, she’s a lovely lady, but we got to get everythin’ right for this artist guy—his big opening. He is the star!”

Aurora smiled fondly. “My Pipino will be a star, too, wit his cooking.”

Pino also secretly believed his meatballs were a work of art, so they had to be presented like a work of art. He refused to pour them in from the big pomegranate ceramic platter. Pino Napoleon—Pipino only to his wife—was meticulous to say the least, though his looks did not give that away.

He was a burly man with wavy dark hair, which always fell across his left eye. He would rake it back with his long sinewy fingers. Without the dark hair, he could have passed for a Scandinavian lumberjack. Instead, he looked more like a windblown fishing boat, banged ashore in Astoria Queens, straight from the Liguria Sea in the Mediterranean.

Content with his carefully piled “neatballs,” he snapped the last corner of the aluminum top closed with a smirk. The tablecloths were already in the van, ironed and folded, side by side with the appetizers. They were all in their individual shiny containers, coded by cover: yellow for the Dijon mustard–flavoured crackers, red for his classic bell pepper spread.

“Where are the light blue ones for our mini–spinade poofs? Come on, do not stick them in your mouth—now of all times, my Aurora Horora!”

“I am so in love wit dem! Warm, crunchy and puffy . . . just like when I see you in your red silk undies, my puffy Pipinusko. I see dem and I become naughty, horrible Horora, I know . . .”

Each container bore the label INSTROCTIONS so that Aurora would get everything
right.

Pino looked sideways at Aurora: cobalt sequin clutch in her lap, she held up a little round mirror as she applied her plum lipstick. Once again he admired her indifference in the midst of his panic. Aurora had the ability to block out the world when she enjoyed herself, which she did regularly. She derived pleasure from mundane daily activities in an endearing way—simple meals, a TV show, spoonfuls of peanut butter, applying her Pond’s night cream, even ironing the pleats of his treasured chef’s hat.

All substitutes in a life without sex, thought Pino. If they had little else between them, at least they lived their parallel lives in relative harmony, seeking comfort in the common habits they had acquired over the years—cooking, catering jobs, Corsican festivals, tango lessons, and, of course, eating. Together they could polish off four pints of homemade ice cream on top of orange tartelettes or demolish the mini–square napoleons, prepared with Pino’s amazing handmade puff pastry dough. Pino sighed at the memory.

Kelly Andria is the pen name of two very close friends who decided to write a story to make people laugh. The two authors, although different in many ways and viewpoints, have a lot in common. Both Greek Americans coming from conservative vibrant families, they learned to speak and act as they believe. Fair but always kind. Their passion for art, food and romance led them to become authors of a comedy that redefines the “boy meets girl” norm.  The wacky one of the group knew that they had the stories in them. The other half quickly became convinced as their quirky characters took shape and form and gained a voice of their own.

Kelly will be awarding a $25.00 GC for either Barnes & Noble or Amazon, winner's choice, to a randomly drawn commenter during the tour.