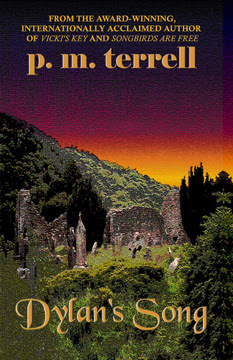 Dylan Maguire returns to his native Ireland with psychic spy Vicki Boyd. Their mission: to locate and extract a CIA Agent who disappeared in Dublin while on the trail of a known terrorist. But when Dylan receives word that his grandmother is dying, he is plunged into a past he thought he’d left behind forever. His mission and the dark secrets he’d sought to keep hidden begin to merge into an underworld that could cost him his life. He must now confront his past demons and the real reason he left Ireland—while Vicki harbors a secret of her own.

Suspense Magazine says, “p.m.terrell’s writing is powerfully written and masterfully suspenseful; you have to hang on for the ride of your life.” Midwest Book Review says the Black Swamp Mysteries series is “page-turning action, unforgettable characters, breathtaking descriptions and unexpected plot twists.” And syndicated reviewer Marcia Freespirit says the series is “riveting, spell-binding, sexy and intense!”

EXCERPT:
“Why are you so adamant about not going back?” Vicki said. “I don’t understand.”

He strode to the back door. With his hand almost on the knob, he stopped abruptly and turned around to face them. “The flight is a hundred hours long.”

“I’ll have jet lag for weeks!”

“Are you afraid of flying?” Vicki asked.

“No!” he bellowed. He opened the kitchen door. “The weather there is atrocious!”

“I can’t believe you’re acting like this is such an inconvenience for you!” Vicki shouted.

“And it’s lasted for thirty years!” With that, he marched outside and slammed the door behind him.

Vicki and Sam stared at the door for a long moment without speaking. Then she turned to him. “I’m at a loss here.”

He continued staring at the kitchen door as if he hadn’t heard her.

“Do you know why he doesn’t want to see Ireland again?” Vicki asked.

“He can’t refuse a mission,” Sam said quietly. “You can’t pick and choose your missions in this line of work.”

Vicki turned to stand directly in front of him.

“Do you know,” she said in a stronger voice, “why he doesn’t want to see Ireland again?”

He looked at her as if seeing her for the first time.

He looked away from her. His eyes roamed the kitchen as though he was searching for something. Vicki stood her ground until he said, “No. I have my suspicions; that’s all.” 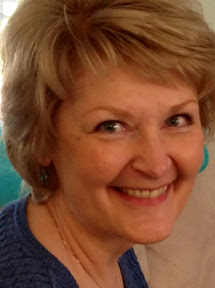 P.M. Terrell is the award-winning, internationally acclaimed author of more than 16 books. Vicki's Key, one of the first books in the Black Swamp Mysteries series, was one of five finalists in the 2012 International Book Awards (Mystery/Suspense) and 2012 USA Best Book Awards (Mystery/Suspense.) River Passage, an historical work based on her ancestor's migration to Fort Nashborough in 1779-1780, won the 2010 Best Fiction & Drama Award. The Nashville (TN) Metropolitan Government Archives determined it to be so historically accurate that they entered the original manuscript into their Archives for future researchers and historians.

Prior to becoming a full-time author in 2002, terrell founded and operated two computer companies in the Washington, DC area. Her clients included the United States Secret Service, CIA, Department of Defense and federal and local law enforcement. Her specialty is in the areas of computer crime and computer intelligence. Her experience in these areas have greatly influenced her books' plots.

She is the co-founder of The Book 'Em Foundation, whose slogan is "Buy a Book and Stop a Crook" and whose mission is to raise awareness of the link between high crime rates and high illiteracy rates. She founded Book 'Em North Carolina Writers Conference and Book Fair, an annual event to raise money to increase literacy and reduce crime.

PLEASE MENTION THE PRIZE THAT THE AUTHOR WILL BE GIVING AWAY:

P.M. will be giving a Celtic Key Necklace identical to the one Dylan gives to Vicki in Dylan's Song to a randomly drawn commenter during the tour.

Posted by Margay Leah Justice at 9:19 AM