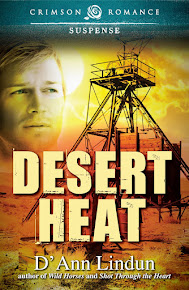 I had to be in the sixth grade, sitting in Tolleson, Arizona, when the TV showed a man who had supposedly found the Lost Dutchman mine out in the Superstition mountains. Of course he hadn’t. No one has. I rode horses with my dad in those mysterious hills, and always felt the spirits of the men who had buried that gold…and the men who had lost their lives looking for it.

Deciding to see if Skeeter would like to have breakfast, Mike walked the short distance to the Spanish-styled cabins, enjoying the view along the way.  The near horizon was filled with jagged red cliffs and a cactus forest.  In the distance, the violet-hued Superstitions strained for the sky.  Along the western edge of the property, the Salt River provided water to the citizens of Phoenix and its suburbs.  Right now, Mike almost hated the sight of the slow-moving current.  Fighting off his anger, he knocked on the door of the last cabin.  When no one answered, he shrugged and turned away.  Then he spotted Nobody staked out a few feet from Skeeter’s cabin.  Something didn’t look right.  The burro’s head hung between his front legs, his ears drooped.  In two quick strides, Mike was at the little animal’s side.  The burro’s sleek tan flanks were drawn up tight.  He obviously hadn’t been fed or watered in at least a day or two.  This wasn’t like Skeeter.  He loved his little companion.  Something had to be wrong.

After leading the burro to an empty corral and filling the trough with cool, clean water and the feed bin with good hay, Mike went to see about Skeeter.  He knocked again, listening carefully for signs of life.  Hearing nothing, he took the master key out of his pocket and unlocked the door.  The stench hit him first.  His mind refused to believe it for a moment, but the sticky-sweet smell of something once alive, now rotting, was unmistakable.  He’d come across enough dead animals in the desert to recognize the particular odor.

Digging a clean bandanna out of his pocket, Mike held it over his nose and mouth and stepped inside.  In the dim light, he saw Skeeter’s bloated body in the bed.  Apparently he’d fallen asleep and not awakened again.  For that much at least, Mike was grateful.  He scanned the room.  Skeeter had been a man of simple means.  Nothing personal adorned the room.  No pictures, no mementoes, nothing.  Turning away, Mike wondered if there was anyone alive who cared about the old prospector.

Mallory James doesn’t trust men. How could she when her own father abandoned her twenty-two years ago? Now, when she receives a phone call from a man claiming to have found the body of her father in the Arizona desert, Mallory has no way to find out the truth. For closure, she flies to Phoenix to claim the body.
Mike Malone has more trouble than he knows how to cope with. An environmental group, the Salt River Protection League has gotten an injunction that prevents his guest ranch from operating. Tired of the battle, his longtime girlfriend has left him, and his friends—all depending on him for their livelihood—are getting desperate. The last thing he needs is the body of desert rat, Skeeter James, in one of his vacant cabins. And Mike really doesn’t need a beautiful woman taking his mind off business.
The minute Mallory reaches the deserted guest ranch things seem odd. Mike’s friends aren’t welcoming, and one in particular, Diana, seems to want Mallory gone. A vial of gold and half a treasure map are the only legacy Skeeter leaves. Before she can have the burial, Mallory is lured into the desert, bucked off a horse sabotaged by a thorn under his saddle blanket and stalked. Although she is falling for Mike, she can’t love a man she can’t trust. At first, Mike is skeptical of Mallory’s claims, but as incidents begin to pile up, he is forced to admit someone is trying to hurt. But how can they stop what they don’t understand?


Falling in love with romance novels the summer before sixth grade, D'Ann Lindun never thought about writing one until many years later when she took a how-to class at her local college. She was hooked! She began writing and never looked back. Romance appeals to her because there's just something so satisfying about writing a book guaranteed to have a happy ending. D'Ann's particular favorites usually feature cowboys and the women who love them. This is probably because she draws inspiration from the area where she lives, Western Colorado, her husband of twenty-nine years and their daughter. Composites of their small farm, herd of horses, five Australian shepherds, a Queensland heeler, nine ducks and cats of every shape and color often show up in her stories!

Posted by Margay Leah Justice at 11:48 AM