Memories of Murder by Lara Nance, a Paranormal Romance is available now for $0.99 on Amazon Kindle. 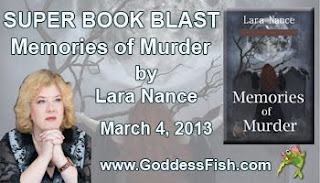 When Maeve McKenna renounces her witch powers and accepts a low-key nurse practitioner position at a Virginia retirement community, the last thing she expects is a suicide her first day on the job.
As the town's sexy sheriff, Paul Sutton, starts looking into the tragic death of his father's friend, Maeve can't help but get involved--with both the case and him. Their informal investigation unveils an old journal that connects the ruins of a nearby asylum and long-forgotten cemetery with the shiny new retirement community's memory unit--and Maeve's Alzheimer's patients.
Maeve senses a sinister presence in the old asylum, calling to the patients, but in order to stop it from killing again, she must first conquer some demons of her own and reclaim the magic she's denied herself.


“No, stop. Don’t jump!” Maeve McKenna yelled at the man poised on the roof three stories above her. Her heart pounded as he took a step that left his toes hanging over the edge. A wave of cold that had nothing to do with fear pressed about her as though a frigid hand gripped her soul. She frowned at the eerie presence and pressed her hands to her head.

“Damn.” She swirled around looking for help. Across the parking lot and among the small villas scattered about the manicured landscape, elderly couples strolled or walked their dogs. But they were too far away to do more than stare in her direction. The urge to use her powers was pointless, she no longer had them.

“Hey,” she called trying to get the man’s attention as he looked back over his shoulder, eyes wide as he flinched away from something she couldn’t see. If only he would talk to her, she might be able to keep him safe until someone got to him. He had on pajamas, so he must be a patient. She held up her hands. “Hey, back up, stop.”

“Oh, no! Mr. Baker, no!” A woman with short black hair ran from the main entrance of the retirement community, waving her arms.

Both Maeve and the woman screamed as the unfortunate Mr. Baker took a step into the air and hurtled to the ground. He landed in a heap of tangled limbs and bloody splatter on the sidewalk in front of them. The cold presence surrounding Maeve seeped away, leaving her rubbing her arms and puzzled at the sensation.

Lara Nance grew up and lived in many cities throughout the South. She loves to write in a variety of genres within the scope of women’s fiction. But the basis of all her stories is a tale that will entertain and intrigue.

If you want to escape and lose yourself in a novel, you’ve come to the right place. Choose your genre and settle in to be entertained. From thrilling mysteries and steampunk tales, to paranormal romance and adventure, Lara’s willing to explore a variety of compelling stories full of danger and suspense, with a touch of romance.

Having been on the fencing team in college and now living on a sailboat convinces her that she was a pirate in another life, or possibly kin to Errol Flynn… However, due to the unfortunate demise of the romantic pirates of the past, she lives out her fantasies, thrills and adventures in her stories.

Currently docked in Norfolk, Virginia (until the wind changes) Lara enjoys living on her sailboat and spends time reading, of course writing, indulging a variety of artistic endeavors, cooking and sailing with her husband, Joe and their Yorkie, Rio.

Posted by Margay Leah Justice at 7:41 AM