Cora Matthews grew up with the Adams boys, twin brothers and best friends who wouldn’t let anything come between them except for one thing—her. One of them became her best friend, the other, her fiancé.She always knew she’d wind up marrying one of them, and Jacob Adams is the very epitome of Mister Right. At least he is up until he fails to show up for their wedding day. Not that Cora realizes it. At first.As Jacob’s best man, and identical twin, Matt makes a split second decision, but one that will affect the three of their lives forever—he steps in to take his brother’s place. In front of the altar, exchanging vows with the woman he’s secretly been in love with for years.Cora eventually finds out about the groom swap. The morning after the wedding. As if realizing she just slept with her fiance’s brother wasn’t disturbing enough, she’s forced to confront her feelings for Matt Adams she thought she’d buried years ago.Matt’s wrong for her. In every way. But through the course of her real honeymoon with her fake husband, she starts to uncover truths both Adams brothers were hoping to keep hidden, for opposite reasons. One to protect himself, the other to protect her.She married the wrong brother, but what if he’s been the right one all along?

“So?” I crossed my arms and leaned into the banister behind me. “Did you? Like my brother?”She sighed, turning toward the open door. “Jacob . . .”“What? It’s a fair question.” I shoved off the banister, feeling hope and heat tangling in my veins from the look on her face, from the sound of her voice. She’d felt something for me, whether it be the most passing of crushes or something much deeper. Realizing that had me feeling drunk from something other than alcohol. “Besides, you’re stuck with me now. Won’t matter what you ’fess up to.”Cora started through the doorway. “I don’t want to talk about it.”Grabbing the suitcases, I followed her. I wasn’t letting this go. Never. Not if she threatened death or castration or anything else. “Why not?”She broke to a sudden stop a few feet inside the room. “Because I don’t want to focus on the past. I want to concentrate on the future. That’s not going to work if you keep asking me questions about Matt.”There was a sharpness in her voice—one she didn’t use too often. She didn’t want to keep talking about me, which only made me want to continue talking about me. I’d struck a nerve, but I wasn’t sure how deep that nerve went.I needed to know how deep it went. I had to know. My whole life, I’d been under the impression that Cora saw me as nothing more than a good friend and substitute brother. She cared for me, but not in the same way I cared for her.Or did she?“This thing with Matt . . .”Her back stiffened.“Was it a thing? Like ancient history? Or is it still a thing?” I closed the door and wondered why I could feel my heartbeat in my eardrums.She kept her back to me, standing in the middle of the dark room like a lone ship on a vast ocean. “I married you.”Yeah, she did marry me.“But if he’d made a play for you, way back before all of this”—I waved my finger between the two of us, not that she could see it—“would you have given him a chance?”“He never made a play for me.” Her voice sounded faraway, like she was out of reach when she was less than an arm’s length away.“That doesn’t answer my question.” I stepped closer. “If he had? Would you have?”Her back was moving faster from her quickened breathing. This conversation was making her uncomfortable. Why was that?“Stop, Jacob. Enough.” She spun on me, swaying in place just enough that I reached out to steady her. She shook my hand away like it was white-hot. “I’m not going to get into another fight with you over Matt. I’m done. I picked you. I married you. What else do I have to prove?”“That you don’t—”“I don’t love Matt!” Her arms flung out at her sides as her voice spilled across the room. ‘There. I said it. Are you happy now? Are you happy we’ve managed to get into another argument over this infatuation you’re convinced I have for your brother? On our wedding night of all times?” She glared at me with bleary eyes. I couldn’t tell if that was from tears or from alcohol. Maybe both.“Cora, I’m sorry.” I ran my hands through my hair, wondering what in the hell I was doing—for the millionth time that day. Deceiving her, betraying her, and now accusing and angering her. Maybe I didn’t know the first fucking thing about love. Maybe Jacob knew more about it than I did, because I wasn’t sure love was supposed to hurt as badly as this did.“Just . . . enough already.” As she shouldered past me, I reached for her, but she shook me off. “I need to be alone.”She slammed the front door behind her a moment later, leaving me alone with my idiocy.“Cora,” I called to an empty room. I wasn’t thinking when I rushed toward the door after her. “Cora!”The moment I pulled the door open, something crashed into me. It made a sharp breath rush out of my mouth as I staggered back a few steps.My arms barely had time to wrap around her before Cora’s mouth was on mine, moving in such a way that made staying upright next to impossible. Before I had a chance to catch up to the fact that I was kissing Cora in an entirely different way than we’d kissed at the wedding and reception, her fingers were working at my belt. Quickly.I didn’t know she’d already gotten it undone before she’d moved on to my zipper. The sounds she was making as she kissed me, the way her body felt aligned against mine, the way her mouth knew the intricate balance of submission and domination . . . one moment at a time, Cora was crushing the last remnants of my resolve. Destroying the final pieces of my views of right and wrong. 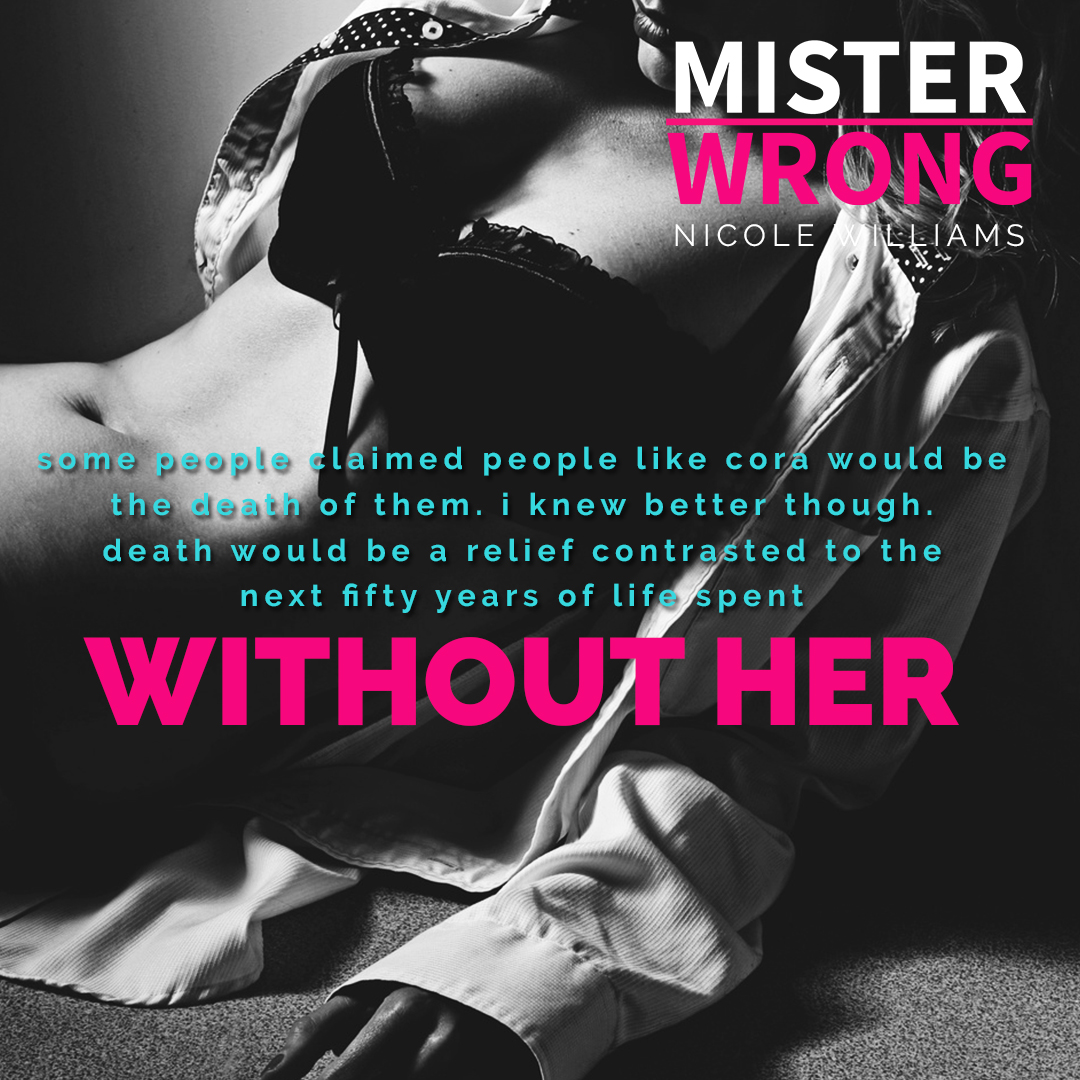 As I sit here trying to break down my impressions of this book, I'm still a little ambiguous about it, days later. It was a quick read, one with a pace that flows easily enough that, before you know it, you've read the whole thing in one night. That's a plus. And some of the characters were very interesting and I wanted to read more about them (Matt and Maggie), but others were so aggravating (Cora and Jacob) that it made me want to give up on the book in frustration many times. I'm glad I read to the end because it was entertaining and I like to get my happily ever after, but in some ways, I kind of wish this went a different way. Case in point: I was so annoyed with Cora and the way she kept Matt on the leash with her indecision, I wish he would've ended up with Maggie instead. In the long run, I think they would've made more sense as a couple. Matt and Cora - not so much. For one thing, she kind of treated him like a doormat and took advantage of his good nature enough that I wondered why he put up with it. He was such a nice guy and he didn't deserve to be treated the way he was by everyone in his life; even his father, inexplicably, treated him like he was inferior - and he did nothing to deserve it, whereas Jacob, who was really an ass to everyone (especially Cora) was treated like he was a king and could do no wrong. The only one who treated Matt with the respect he deserved was Maggie. That's one of the reasons I think they would've made a better pairing. And then there was the way the whole scenario played out. There were some really sexy scenes, some hysterical scenes, but in the end, I felt like things worked out way too easily. There wasn't really a lot of build up to the conclusion so it was kind of anti-climatic. Still, it was a quick fun read.

Nicole Williams is the New York Times and USATODAY bestselling author of contemporary and young adult romance, including the Crash and Lost & Found series. Her books have been published by HarperTeen and Simon & Schuster in both domestic and foreign markets, while she continues to self-publish additional titles. She is working on a new YA series with Crown Books (a division of Random House) as well. She loves romance, from the sweet to the steamy, and writes stories about characters in search of their happily even after. She grew up surrounded by books and plans on writing until the day she dies, even if it’s just for her own personal enjoyment. She still buys paperbacks because she’s all nostalgic like that, but her kindle never goes neglected for too long. When not writing, she spends her time with her husband and daughter, and whatever time’s left over she’s forced to fit too many hobbies into too little time.
Nicole is represented by Jane Dystel, of Dystel and Goderich Literary Agency.