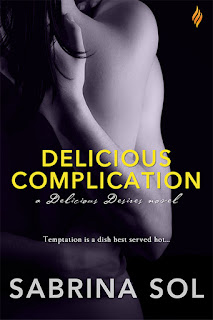 Event planner Daisy Robles can't remember a time when celebrity restaurateur―and celebrated playboy―Brandon Montoya didn't make her nuts. His infuriating arrogance, his hotness...his undeniable sexual energy. One night and a whole lot of expensive tequila later, Daisy's self-control is AWOL. And Brandon's making her crazy in all the right ways.

When their tequila-fueled make-out session hits the tabloids, Brandon is furious. At least until he realizes his “relationship” with Daisy is his chance to get his ill mother to Los Angeles for treatment. All he has to do is convince Daisy to be his pretend fiancée for two weeks...

The deal? No sex and no falling in love. But all it takes is a little heat to find themselves in a deliciously compromising position...


Ten things to know about Delicious Complication
By Sabrina Sol

Sabrina Sol is the chica who loves love. She writes steamy romance stories featuring smart and sexy Latinas in search of their Happily Ever Afters. She lives in Southern California with her husband, three kids, two Beagles and one Bulldog, and is part of a larger, extended Mexican family whose members are NOT the source of inspiration for her characters. Or so she tells them.