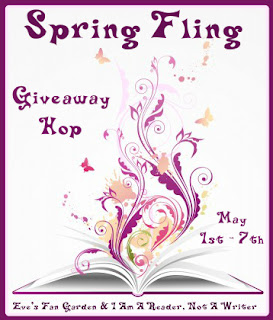 Spring Fling Giveaway Hop
May 1st – 7th
Hosted by I Am A Reader, Not A Writer & Eve’s Fan Garden

Hello! For this hop, I am going to give away a book of the reader's choice. Either an ecopy of my current release, Sloane Wolf, or an ecopy of my soon-to-be-released book, The Scent of Humanity, a romantic suspense novel about an attempted kidnapping in a small town. Please comment below for a chance to win! Extra entries for followers of the blog, on Twitter, Facebook, etc - just leave a separate comment for each!

For as long as they can remember, Silvie and Nick’s lives have been entwined, from the time his father was the investigator on the case of her near abduction to the death of her brother in an accident involving Nick.

Now, as adults, their paths cross again when Nick is the detective assigned to the case of her niece’s near abduction and she becomes his worst nightmare when the case closes after two months for lack of new evidence.

The question is, can these two headstrong people get beyond their complicated feelings for one another to find the potential kidnapper before he strikes again?

Posted by Margay Leah Justice at 10:33 AM

Email ThisBlogThis!Share to TwitterShare to FacebookShare to Pinterest
Labels: giveaway, i am a reader, not a writer, Sloane Wolf, spring fling hop, The Scent of Humanity