BLURB: Being short with big boobs means living life off-balance. Isabel knows this all too well; at five feet nothing with a tendency to tip over in heels, she's struggled for twenty-five years to make clothes, careers and boyfriends fit. Enter Michael. Divorced father, recovering alcoholic and fifteen years her senior--he was the last guy she thought would make the cut. But when he proposed over a pastrami sandwich in a NYC deli on the anniversary of their first date, Isabel knew, improbably, that he was the one. Fifteen mostly happy years and two kids later, Isabel walks into her living room to discover her husband dead on the floor, leaving her a widow at forty-one. At Michael's funeral, a guest solemnly informs her that the official mourning period for a Jewish widow is thirty days. At the moment, Isabel can't imagine a time when she will stop grieving. Not helping the process is this: as a single mom living in the very married suburbs, for the first time in fifteen years Isabel once again just doesn't fit in. It takes her four year-old daughter's request for a new daddy to set Isabel on a journey through online dating, shifty matchmakers and painfully orchestrated single dinners. But after endless dates, a torrid affair with an unemployed, passive-aggressive neighbor and a story on page three of the New York Daily News, Isabel begins to realize that another man may not be the answer and, surprisingly, that's when things begin to change for the better...

Charlie put down his drink and took another tack. “Are you familiar with that Nietzsche theory?”

“The one that says ‘Whatever doesn’t kill us makes us stronger’?”

“I think that whatever doesn’t kill us just eats us alive...bit by bit…until at the end, all we need is a dent in the car or…” He looked directly at me and continued: “…a lousy-ass guy to push us over the edge.”

“So what? Are you saying you’re a lousy-ass guy? Or are you just afraid I’ll end up with one?”

He paused for a minute. Then, as if in answer to my question, he sat up, leaned over, and kissed me. He was hesitant at first, as if his lips were trying to find exactly the right place to settle on mine. And then they did. The kiss was passionate, needy, questioning. I breathed him in as if he were oxygen. He put his arms around me and pulled me to the floor, his hands touching my face, my breasts, my hips. I held on to him for dear life while the rolling Cuban rhythm of Buena Vista Social Club wafted in the air like perfume.

Amy Holman Edelman lives in New Jersey with her husband, children and Irish Jack Russell, Roxy. She is the also author of The Little Black Dress ('97).

Amy will be awarding a $25 Amazon gift card to a randomly drawn commenter during the tour. So make sure you follow the tour and comment often! The tour dates can be found here:  http://goddessfishpromotions.blogspot.com/2012/12/super-book-blast-manless-in-montclair.html 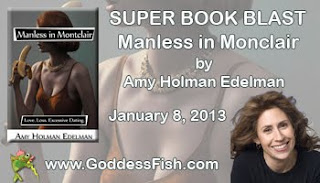 Posted by Margay Leah Justice at 7:57 AM