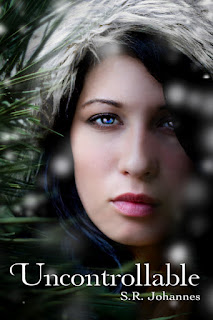 Hey!! - here is cover for Uncontrollable (Book 2 in The Nature of Grace series) (What do you think?)

I am also having a cover contest so if you could let your readers know :) It will kick off Friday with cover reveal at srjohannes.com

Here is the summary

As Grace recovers from tragedy, her science class is chosen by Agent Sweeney at the U.S. Fish & Wildlife Service to help with research on the new "Red Wolf Reintroduction Program".

While she’s excited about helping with the conservation of the endangered wolves, Grace knows this means being outdoors in the worst winter recorded, in a place she no longer feels comfortable. It also means working closely with Wyn (her ex) and his annoying girlfriend (Skyler), a girl whose idea of getting close to nature is growing silk plants.

After a couple wolves show up dead, Grace almost quits. When a fellow project team member goes missing, Grace continues the assignment under a renewed suspicion that someone might be sabotaging the conservation program. She quietly begins to hunt for clues.

Little does she know, she is being hunted too.

And possibly by more than one person.

"Grace is a spunky, independent, nature girl who doesn't need a boy to save her. With wilderness survival, a juicy love triangle, and more twists and turns than a roller coaster, this fast-paced novel had me holding my breath until the very last page—and still begging for more!" -Kimberly Derting, author of the The Body Finder series (Harper Teen) and The Pledge series (S&S)

"This thrilling story is a dramatic entanglement of mystery, deception and teen romance. The action flows like a brisk mountain stream interspersed with rapids, holding suspense to last page."
- Kirkus Reviews

"Johannes has done a marvelous job of creating a suspense-filled mystery with surprises that keep you guessing all the way to the end. Untraceable is a thoroughly engrossing and riveting page-turner."
-IndieReader

Bio
S.R. Johannes is the author of award-winning and Amazon bestselling Untraceable (a teen wilderness thriller) and new tween paranormal, On The Bright Side. She has also published short novelettes as well as a teen romance anthology with 16 other authors titled, In His Eyes.  Uncontrollable, the sequel to Untraceable, is scheduled for September 2012.
S.R. Johannes is a winner of the 2012 IndieReader Discovery Awards (Young Adult) and was also recently nominated for as Georgia Author of the Year (Young Adult).
After earning an MBA and working in corporate America, S.R. Johannes traded in her expensive suits, high heels, and corporate lingo for a family, flip-flops, and her love of writing.  She lives in Atlanta, Georgia with her dog, British-accented husband, and the huge imaginations of their little prince and princess, which she hopes- someday- will change the world.
Posted by Margay Leah Justice at 10:39 PM