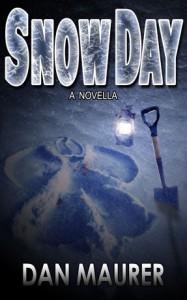 ABOUT SNOW DAY: A NOVELLA

It happens each winter, and has for over 35 years. Every time the snow starts to fall late in the evening before a school day, the dreams begin again for Billy Stone. They are always the same – there’s a dark tunnel, and there’s blood, lots of blood, and someone is screaming. In this chilling childhood tale, Billy, recounts the events of one unforgettable day in 1975. On that day, he and his friends played carefree in the snow, until an adventure gone awry left him far from home, staring death in the face, and running from a killer bent on keeping a horrible secret. Set in a time before Amber Alerts, when horror stories were told around camp fires instead of on the nightly news, Snow Day is a blend of nostalgia and nightmare that makes us question if the good old days were really as good as we remember. From a new voice in dark fiction comes a thriller about an idyllic childhood turned horrifying; a cautionary tale about how losing sight of the difference between feeling safe and being safe can lead to deadly consequences. Free Audiobook Sample — Snow Day: Prologue 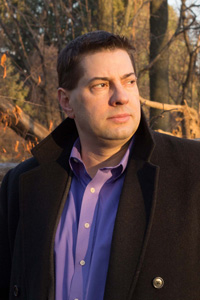 Dan Maurer is an independent author, publisher, theater producer, director, and digital marketer. He is also a proud member of International Thriller Writers, Inc. and the Horror Writers Association. Throughout his career in publishing and marketing, he has been involved in the publication of bestselling titles such as John Grisham’s The Firm, Richard Price’s Clockers, and Jim Lovell and Jeffrey Kluger’s Lost Moon, which became the film Apollo 13. As a digital marker, he has supported popular publishing brands including Curious George, Peterson Field Guides, and The Polar Express. He has also developed marketing strategies for many corporations, including Citizen, Dun & Bradstreet, RCN and Bristol-Myers Squibb. Dan is a member of an acclaimed New Jersey-based theater company and has won awards for his producing, directing and sound design. He lives with his wife and their daughter in Robbinsville, New Jersey.

Tap…tap, clang… Tap…tap, clang… ”Hello?” My voice was cautious as I called into the darkness. It wasn’t my house and I had no business being down in that cellar. By the look of the boards on the windows upstairs, and the weeds that strangled the front yard, it hadn’t been anyone’s house for a long time. But still, even at ten, I knew in my bones that I’d made the biggest mistake of my life. One of the windows was busted at the corner, and the cold wind whipped and whistled at the breach. Outside, a loose metal trash can rolled and rattled and knocked about with each new gust. It made a soft, distant sound. Tap…tap, clang… Tap…tap, clang…

The only light was an old Coleman lantern that I found there. It lay at my feet, the mantle fading and sputtering. Beyond the meager glow that lit no more than my boot-tops, it gave me the terrifying certainty that someone was here, or close by, and would soon — Was that a sound? I held my breath and listened carefully, trying hard to dismiss the pounding pulse that thrummed in my ears. Was that a shuffling sound, maybe feet moving and scraping across loose dirt? “Hello…? Anyone here…?” I squinted hard but it was useless. The darkness was unyielding and oddly thick with the smell of freshly turned earth. Someone had been digging down here. Tap…tap, clang… Tap…tap, clang…

Running into the house to hide from the police was my only option. The place should have been empty, long abandoned. But it wasn’t, and I knew now that I had to get out. I turned to leave, to run; and then I heard it, a word from the darkness. It was whispered and pitiful and — it was my name. Someone in the darkness called my name. ”B-Billy?” ”Who’s there?” I called out. ”I…I…didn’t d-do nothing wr-wrong, Billy.” Both the voice and its stutter were familiar. Just hearing it made my guts twist. Tap…tap, clang… Tap…tap, clang…

I snatched up the lantern at my feet, recalled my scout training, and worked the pump to pressurize the kerosene. The lantern’s mantle hissed a bit, burned a little brighter, and pushed back the darkness. ”Holy shit…” The light washed over a young boy. Like me, he was just ten, and I knew his name. ”…Tommy?” It came out like a question, but it wasn’t. Tommy Schneider lived next door to me and was part of our snowball fight just a few hours before. When the light touched him, Tommy flinched and turned his shoulder, as if anticipating a blow. He shivered and folded his arms across his chest, hands tucked in his armpits. He paced and shuffled his feet in a small circle, as if his bladder was painfully full, and he whined and muttered; half to himself, half to me. “It w-wasn’t m-my fault, Billy. I…I just w-wanted to play.” His eyes were swollen and red, and the tears ran streaks through the dirt on his freckled face. Tap…tap, clang… Tap…tap, clang…

“Tommy, what the hell are you doing down here?” ”I..I…I’m sorry, b-but I d-didn’t do nothing wrong, Billy. I’m s-sorry.” He kept his hands tucked under his armpits, but motioned with his chin. And that’s when I saw it, just a few feet from where I stood. Naked and half buried in a pile of loose earth lay the dead body of a boy that appeared to be our own age. ”Jesus Christ…what the hell, Tommy.” ”No….” His whining grew and fresh tears were coming. ”What the hell did you do?” ”Nooo…” he whined more and covered his ears. “I didn’t do nothing wrong.” Frantic now, I held out the fading lantern, quickly looking around. We were still alone. The scene before me was unfathomable. In the half-shadows of the cellar where the lantern struggled to reach, there was a pile of fresh, moist earth and broken shards of concrete. I saw some tools – a sledgehammer and a shovel, and I think a pickax, too. A few brown sacks of cement mix were piled against the wall. And there was a large hole; a gaping wound in the cellar floor that reached beneath the foundation of the house, a hole that led down into a place where the lantern’s light could not touch. Nearby, a stray boot lay in the dirt, just beyond it a gym sock, and another lay close by my feet. A faded, wadded up pair of jeans was perched at the edge of the hole. Tap…tap, clang… Tap…tap, clang…

I shivered, despite my layers of clothing and new winter coat. Tommy was freezing. He wore only jeans and a t-shirt pulled over a long-sleeved sweatshirt. His breath, like mine, fogged in the January air, and his jaw waggled helplessly from his shivering. “Who’s that?” I asked, pointing to the body. At first, Tommy’s eyes followed my finger, but then he just moaned and cried some more, and turned away. I couldn’t tell if the boy on the ground was from our immediate neighborhood, or my school, or Boy Scout troop, or baseball team. It was difficult to discern much about him at all. He lay on his belly in a pile of dirt, and the loose earth covering his face and parts of his torso were, it seemed, tossed on him carelessly by whoever dug the hole. The backs of his pale white thighs glowed in the lantern’s light. The only stitch of clothing left on him was a pair of white Fruit of the Loom jockeys tangled around one ankle. I picked up one of the gym socks from the ground, pinched it into a ball and held it with the tips of my fingers. Kneeling beside the dead boy’s head, I held the lantern close with one hand and used the sock to brush the dirt from his face with the other. Like a fossil being unearthed by an archeologist, the truth came slowly. As the seconds passed, the light and each stroke of my hand brought broken, bloodied and indecipherable features into sharp focus. But the crushed and jellied eyeball put me over the edge. I jerked back from the body. ”Oh, God! Tommy, what — “ My stomach lurched. I dropped the lantern and fell backward onto the ground. Turning and scrambling away on hands and knees, I found a corner and began to wretch. My back arched and my body convulsed uncontrollably. It was the Coney Island Cyclone all over again, but this time nothing came up, only thin strands of bile dripped from my mouth and down my lips. In time, the convulsions faded. I finally rolled over and just sat there, looking at Tommy, wiping the spittle from my lips with the back of a shaky hand. My head throbbed and my mind was fuzzy. No words would come. The wind howled through the broken cellar window again. Outside, the passing cars made a distant shushing sound as they crept along Woodlawn Avenue, tires rolling through the snow and slush. My heaving, stinking breath clouded in the cold air, and Tommy just cried. Clang, clang… Clang, clang…

I was ten years old and had just seen my very first real dead body – still and soulless, and battered beyond recognition – lying on the floor of a cold, dark cellar of an abandoned house. What the hell did I get myself into? Clang, clang… Clang, clang… Staggering to my feet, I picked up the lantern and held it out. ”Tommy… who did this?” My throat was dry and pained. Just as the words passed my lips, something in my mind and in my ears opened up – popped open, really, like in the cabin of an airliner during descent. That sound. Clang, clang… Clang, clang…

It was different. It was continuous. It wasn’t the rattling trash can anymore. The sound came from a distance but it was there, and it was distinctive. I knew exactly who was standing impatiently, hip cocked and jaw set, banging on the lip of a dinner bell with her soup ladle. Clang, clang… Clang, clang…

Pump Up Your Book and Dan Maurer are teaming up to give you a chance to win a new Kindle Fire HD!

Posted by Margay Leah Justice at 8:18 AM